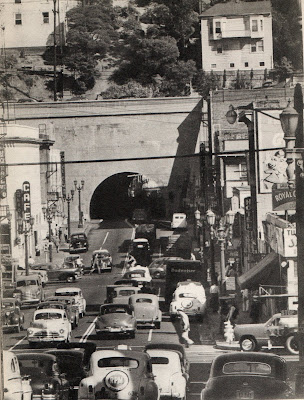 Over the weekend I found a book published in 1950 called The Los Angeles Book and when I skimmed the chapter listings there was one that stood out right away. Chapter 10 was titled, "Where 'Traffic' is Spelled 'Terrific.'" I at first chuckled, thinking that the authors were going to be talking about how great traffic was in Los Angeles, however, what they had to say was quite the opposite! In fact, the authors point out that even in 1950 Los Angeles had a serious traffic dilemma. And in all these decades since this book was published Los Angeles still hasn't solved its traffic woes.
So you too can read what they had to say about traffic in Los Angeles in 1950 I've posted below part of this particular chapter.
From The Los Angeles Book, Houghton Mifflin Company 1950, by Max Yavno & Lee Shippey:
"An Angeleno's Paradise is one in which all have wheels. The traffic problem in Los Angeles began in 1900 and has been increasing ever since. In 1900 only a few foolish persons owned automobiles. When cars began to be common, the horse lovers decided to put an end to motor vehicles, once and for all, by filing damage suits.
That attitude caused the creations of the Automobile Club of Southern California, a little group of automobile owners banded together for self-protection. It has grown into the biggest club in the country, with 280,000 members. It not only serves motorists all over Southern California but does a big insurance business and publishes Westways and other publications. Because some parts of Los Angeles were more than thirty miles, by main highways, from other parts, and the street car lines all radiated from the center, often one had to go ten miles downtown, transfer to another line and go ten miles back, in order to reach a place which was only two miles away. So the motorcar became more of a necessity in Los Angeles, and all of Southern California, than in most areas...
Traffic checks show it is an ordinary thing for 7000 cars an hour or about 117 a minute, to pass a busy intersection during rush hours. A six-hour check at Sunset and Figueroa counted more than 34,000 cars. On the 4811.22 miles of streets and 653.31 miles of alleys and trails in spread-out Los Angeles, there are plenty of intersections.
Fines assessed on traffic offenders yield Los Angeles half a million dollars a year, and anyone driving anywhere gets the impression that the police fail to catch most of the offenders.
It is a tragic fact that Los Angeles had the highest traffic death rate per hundred thousand population in the country from 1933 to 1949, but in June 1950, it surprised itself by winning national honors for safety.
Nowhere else is the traffic problem quite what it is in Los Angeles, and the reason is, at first blush, surprising. We have already mentioned the fact that this city of 2,000,000 has no skyscrapers. The throngs pouring in or out of skyscrapers which congest the streets in certain areas of other big cities are not a problem here. In addition, comparatively few Angelenos live in apartments, and there are practically no tenements. A tree growing in some parts of Brooklyn may be worth writing a book about, but the slums of Los Angeles are mostly small frame buildings with yards and trees and shrubs, often with flowers. They are paintless and dilapidated, and many are terribly overcrowded, but at least they are in areas of light and air, sunshine and green trees which cast a shade. 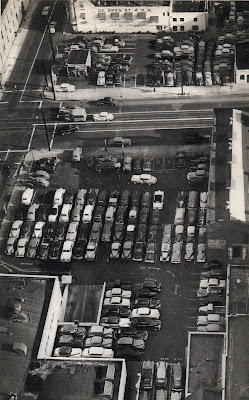 While such spreading out into individual dwelling units tended to decrease traffic jams at first, they have brought up problems of their own. Angelenos not only wish to live alone and like it but are choosy and fickle about neighborhoods. A worker in a huge industrial plant on the east side of Los Angeles may prefer to live in a suburb on the west side, and must drive across the city during both the morning and evening rush hours. The mere fact that business is not concentrated in one area as it is in Chicago's Loop, and that shopgirls and workers do not live in tenements or towering apartments, means that all those persons have to travel miles instead of blocks. One airplane plant survey showed that the average worker lived twenty miles from his job, and driving to and from the plant during rush hours really added two hours daily to his toll.
The freeways already completed, it was thought, would carry vast tides of traffic into the city and out again and so relieve congestion. But they made it so inviting for shoppers and businessmen to drive to and from the city that there was more downtown traffic than ever to contend with. Now thirty-five million dollars is being spent on a ten-year plan for new freeways which, it is believed, may result in one per cent of the streets carrying fifty per cent of the traffic. But the other fifty per cent will provide plenty for the other 4800 miles of streets...
Some of the city's finest stores, in the downtown area, are building branch stores which are bigger and finer, in outlying districts where they can get adequate parking. And as soon as they do that, smaller shops of all kinds spring up around them, to take advantage of the same parking facilities. Some merchants find they have to provide four times as much parking space for customers' cars as they do floor space for customers and goods. Some of them desperately buy valuable building lots or even have substantial buildings moved off lots in order to use them for parking. Some, who thought they had secured adequate parking, find that their own employees take up so much of it with the cars in which they drive to work, which remain there all day, that they are asking clerks to come to work by bus or streetcar. Thus, perhaps in the only great city in which a considerable proportion of the salesgirls and minor clerks own cars, they soon may be unable to use them to go to work in because of traffic.
No matter where one goes, traffic is terrific. Hollywood Bowl is about seven miles from what was the entertainment center. The Hollywood Park and Santa Anita race tracks are fifteen and twenty miles from it. You can't go from anywhere to anywhere without bucking traffic, for in Los Angeles motorcars are like waves on the ocean.
Looking down from the City Hall Tower or almost any high point in the city, one may see parked cars wherever cars can be parked. Whenever there is a big football game in the Coliseum they are parked all over lawns for blocks about. A park for 3500 cars is to be built under Pershing Square, similar to the one under Union Square in San Francisco, but that will care for only a fraction of the parking needs of the downtown district.
Additions to the freeway system and rapid public transit to suburban areas doubtless will help a great deal, for perhaps half of those who drive into the city would prefer to ride in trams and buses if only they could make reasonably fast time in them. In the meantime, Los Angeles groans and adds to its problem daily. There was a time when Main Street was called the "Fifth Avenue" of Los Angeles, but now the stores and shops which would create a Fifth Avenue and the theaters and restaurants which would create a Broadway are from five to fifteen miles apart, and many of the city's principal places of entertainment are farther apart than that. But city departments, the Chamber of Commerce, the All-Year Club and other bodies are collaborating in efforts to solve the problems, and Los Angeles serenely jogs, bumps, honks and smashes its way ahead, confident that before too long they will come up with helpful answers. At least, in civic crisis, someone always has come up with them."
Pretty interesting don't you think? What are your thoughts?
Posted by Robby Cress at 7:50 PM

hey, thanks for posting this! I like the bit you bolded in red: "average worker lived twenty miles from his job, and driving to and from the plant during rush hours really added two hours daily to his toll."

That's right. You would think after nearly 6 decades Los Angeles would have figured out the traffic situation! Oh well, I guess that's part of being an Angeleno.

My belief is that traffic has been shit since the 1930s at least...and thank you for confirming it!

I HATE LA traffic. However Im good enough to drive in it...so yay to that. But its ridiculous it takes me almost 2 hrs to get from Burbank to Santa Monica, when on a light traffic day its a half hour away. Same for Downtown.

I dont care for our public transportation. Its more confusing then the parking rules and the one time I tried to use it it failed me greatly (Halloween night it quit running 4 hours before it said it would). I wont EVER use it again. Also the high number of scuzzy to classy people usuing it (Downtown, Santa Monica, and West Hollywood excluded) is enough to keep me away.

I know, it so frustrating to think that a drive from Burbank to Santa Monica can take up to two hours! Something needs to change. Although the public transportation is getting better I understand your concerns about riding it in some parts of town. :0