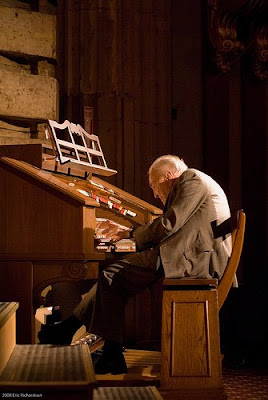 Bob Mitchell, photo (C) Eric Richardson
The legendary silent film organist Bob Mitchell died this past weekend. He was 96 years old. I mainly knew Mitchell for his weekly performances at the Silent Movie Theater on Fairfax Avenue in Los Angeles. Mitchell would create the soundtrack for the silent films, anything from Charlie Chaplin to Valentino pictures, using the theater's organ. However, I didn't realize how fascinating the rest of Mitchell's life was until after reading his obituary in the Los Angeles Times. Mitchell was the first house organist for the Dodgers, he started the Robert Mitchell Boys Choir which appeared in over 100 films, including Going My Way with Bing Crosby, and he was also an organist for the Los Angeles Conservancy's Last Remaining Seats, a series that presents classic films. Read the Los Angeles Times obituary here.
Here is a short video of Bob Mitchell playing at the Silent Movie Theater in Los Angeles.
Posted by Robby Cress at 8:04 AM

thanks for the post cutie and to the link to his obituary. when i first saw him play, it was for steamboat bill jr. and he didn't miss a note, with no sheet music may i add! i had a fond little heart for bob mitchell.

fond hugs and kisses thru the clouds up to heaven for him.

Sounds like he lived a good life. I like your blog ... just added myself as a "follower."
Best,
Marty

Thanks so much for this entry. What a great man who lived a very full life.

Thank you *so* much for posting this-- I adored this man! He was a true Los Angeles local legend and he is certainly what made the Silent Movie Theater the gem it is!

Thanks for the memories, Bob!

The live organist or musical component is so much of what allows silent films to speak. Imagine how many people he brought joy to with his work in those 96 years. Bob will be missed.

Once again...thanks for posting such great stories about such interesting and dear people. The history is precious!