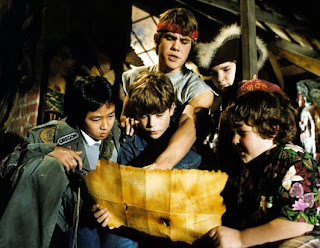 The Goonies (c) Warner Bros. Entertainment Inc.
"Hey you guys!" Can you believe The Goonies is about to celebrate its 25th anniversary? Me neither, but June 4-7, the city of Astoria, Oregon, where the film was shot on location, will be hosting a four day celebration that sounds pretty exciting.
The festivities include a red carpet showing of The Goonies along with the premiere of a brand new documentary about the making of the film. Some of the cast members plan to be in attendance, including Corey Feldman (Mouth), Jeff Cohen (Chunk [who's not so chunky anymore]), and Joe Pantoliano (Francis Fratelli), to name a few. Other events include a Goonies themed treasure hunt, meet & greets with the cast, VIP dinner, 80s themed dance night, a Goonies themed concert taking place on the same football field used as a location in the film, a "truffle shuffle" 5K run, and the list goes on. For full details check out the official anniversary page: http://www.gooniesanniversary.com/
But, the one thing I wish I could participate in are the location tours that will be taking place during the celebration. If you take the official tours that will be available, you will have the opportunity to see some of the exterior locations, like the football field, as well as some of the interior locations, such as the houses that were used as "Mikey's House" and "Mouth's House."
Unfortunately, I'm not going to be able to get up to Astoria, Oregon for the 25th anniversary, but if any of you are able to make it, I would love to hear how it all turns out.

The Goonies Theatrical Trailer
Your thoughts?
Posted by Robby Cress at 8:58 AM

Wow - Has it really been 25 years? I love this movie - classic Spielberg. I'm certain Corey Haim would have been part of the celebration.

WOW I feel so old. I loved Goonies. Even got my kids hooked on it. I wish I could go.

25 years already?! The Goonies was the first film I saw multiple times on the big screen (3 I think). It's also the only film I've actually watched in dvd with the commentary which is HILARIOUS! Most of the "kids" got together for it and you could tell they hadn't seen it in years and were having a blast reliving it.

PS: Were all movie trailers that bad back in the 80s? yikes!

We did a tour of our own in Astoria back in February. The town is really hyping up the 25th anniversary. They were handing out flyers at the Flagler House and there were flyers in windows of some of the shooting locations. I hope the turnout for them is good. It seemed like the town is happy to celebrate and welcome everyone.