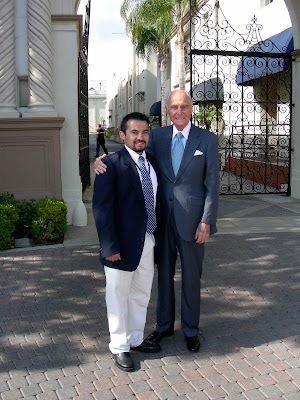 Gene with Paramount Producer, A.C. Lyles
This the second part in a new series I plan to continue featuring interviews with former and current studio pages. As I've mentioned before, I think pages have one of the most fun jobs at a studio and often have some interesting stories. Here is what former Paramount page, Gene, had to say about his page experience:
What years did you work as a Page at Paramount Studios?
2006- 2007

For those who are not familiar, what does a Page do? What did your job duties consist of?
Paramount pages were primarily used to give 2 hour tours to the general public, help with audience coordination of shows like Dr. Phil or sitcoms such as Girlfriends, also the pages were occasionally used to work temp jobs around the lot.

What was your most interesting experience?
I had a group of kids from the Make A Wish foundation on a tour. Kelly Carlson, who was filming Nip/Tuck on the lot at the time took time out to talk to the kids, sign autographs, and gave them a tour of the set. The Make a Wish kids had a great time and she was a class act.

What was your least favorite experience?
Anytime I'd get a group of people for a tour who spoke little to no English and had absolutely no interest in studio history.

Any celebrity run-ins?
One time Tom Hanks stopped my cart and tried to talk to the guests. The tourists were so shell shocked at seeing Tom Hanks they momentarily forgot how to talk. All 8 tourists in that cart just sat there in awe staring at Tom Hanks.

How did you come to work as a Page at Paramount? What was the process like to get the position?
I applied to the Paramount job site. They called me in for what was a group interview. The interview was conducted in the Gower Theatre which was allegedly the very same screening room where Howard Hughes locked himself in at the end of the film "The Aviator". There were like 30 people there for the interview. We all took turns standing in front of the room talking about ourselves. It was a bit nerve racking. They ended up hiring 7 of us from that group. 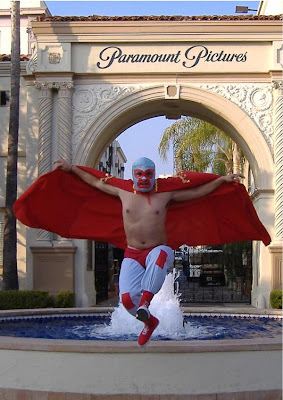 Gene Dressed as Paramount character Nacho Libre
Studios always have ghost stories. Did you encounter any old Hollywood ghosts or hear any of the stories?
One of the most fascinating stories I heard was Redd Foxx passing away during a live taping of the sitcom. One day while filming "The Royal Family" Redd had gone to take a nap in a recliner on the set during one of the breaks. Unfortunately, when it was time to resume filming, Mr. Foxx never did wake up. The coroner drove right up the sound stage and took away his body before a live audience.

Do you watch the television show 30 Rock? What do you think of the character Kenneth who portrays an NBC Page?
A friend I used to be a page with sent me a clip of the "Page off" with Kenneth squaring off against Paul Scheer playing the head page. I gotta say that is EXACTLY what being a page is like.

What was your most unusual assignment at Paramount?
One time we had to work a press junket for a family themed cable channel to introduce their fall shows. Our job was to hold the microphone for the press as they asked questions to a panel of puppeteers and their puppets. It was kind of bizarre watching a grown woman sit there with a puppet on her lap answer the questions in the high pitched voice of her puppet.

Would you reccommend a Page program for others entering the work world - especially those pursuing careers in entertainment?
Sure why not. I met some great friends, many of who I still keep in touch with. It really did help me get my foot in the door, as I've been fortunate enough to stick around the lot working long after my pagedom.

What is happening in your post-page life? Where are you working or what projects are you involved with?
I currently work as administrative assistant in marketing and I try to make funny videos in my spare time.

Now, a few quick questions:
Favorite classic movie? Once Upon a Time in The West

Love it! I didn't know Pages were referred to as Pages. Paging would be my dream job!!!