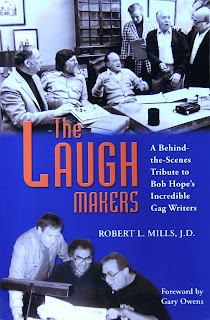 "The Laugh Makers," by Robert Mills
Bob Hope was known for his one-liners, but a lot of those great jokes he is remembered for came from a group of writers and gag men that Hope had working for him behind-the-scenes. Hope was so in demand during his career that he constantly needed new material, which is why he kept so many jokesters on his payroll. Author Robert Mills and former Hope gag writer, will be discussing his book "The Laugh Makers," all about Hope's funny-men, at the Burbank Public Library on November 4. So, if you want to hear the behind the scenes story on Bob Hope's humor you should mark your calendar for this event.
Of course, as we all know, jokes don't make a person funny, it's how a person tells a joke. Hope was the master of comic delivery. He had such superb timing and the ability to ad-lib, that even when a joke didn't play well, he could still make something out of it. For this reason Hope was constantly being called upon to emcee different events, whether it be the Academy Awards, some banquet in Washington, or entertaining the troops.
Here are a few Hope one-liners:
"A James Cagney love scene is one where he lets the other guy live."
"Please don't stand up on my account." - To a group of amputees.
"I thought Deep Throat was a movie about a giraffe."
"Golf is a game that needlessly prolongs the lives of some of our most useless citizens."
"I do benefits for all religions. I'd hate to blow the hereafter on a technicality."
"Zsa Zsa Gabor got married as a one-off and it was so successful she turned it into a series."
Here are the details on Robert Mills's appearance at the Burbank Public Library
Who: Author and gag writer, Robert Mills
What: Discussing book, "The Laugh Makers"
Where: Buena Vista Branch Library, 300 N. Buena Vista St, Burbank, California
When: Thursday, November 4, at 7pm
Posted by Robby Cress at 9:42 AM

Wish I could be there for that!

Thanks, Bobby. I look forward to my book talk at the Burbank Library on November 4. I will be showing some short clips from the 85 TV specials I co-wrote.

Photos from my book THE LAUGH MAKERS enlarged and in color (plus many that couldn't be included for reasons of space) can be viewed at:

You're welcome Robert. Sounds like you have a great presentation lined up! And thanks for sharing the link. You've got many great photos worth checking out.