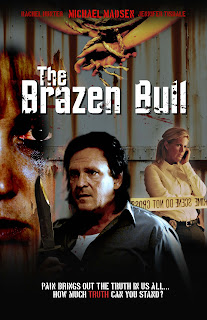 The Brazen Bull
The new film, The Brazen Bull, starring Michael Madsen (Reservoir Dogs, Kill Bill), is now available on DVD; so if you're in the mood for a creepy thriller you should pick up a copy. I recently had the chance to ask the director and writer Douglas Elford-Argent, who like me has a strong interest in the film history of Los Angeles, a few questions about his latest film. Here's how it went:
Like me, I know you have an interest in classic films, but before we talk about that why don't you tell us a little about your latest film The Brazen Bull. What's the movie about?
Sure, The Brazen Bull is a Thriller set in an abandoned building where our lead character, played by Michael Madsen, feels he has been robbed from the economy and takes his revenge on three young kids.
How did the story come about?
I wrote the first draft 6 months before production began (May 2009) we went through a few changes and I handed my draft over to two great writers, Thomas Bilyeu and Chris Van de Polder. They are responsible for the final script that's up on the screen. Gregg Luckman (EP) gave me total creative control on this movie, so I have a lot to thank him for, his trust for a young director was fantastic, he's a great Producer and hope to work with him again.
What was it like directing a star like Michael Madsen?
Michael is an old school actor, he loves improv and respects any young director that will let him run free. What ended up on the screen was about 80% of the script, Michael added his Madsen touches and filled the gaps. He's a true listener and trusted my vision and direction.
Working with a veteran actor like Madsen, did you learn anything in regards to your directing?
Yes a lot, he showed me how to think on my feet and to trust the actor you hired for the role, Michael likes to shoot a scene and then start to play with it, showing me what he can bring to the table. 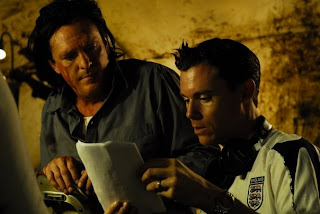 Michael Madsen and Douglas Elford-Argent
Can you tell us a little about the rest of the cast?
Yes, we have Rachel Hunter who plays a Detective and mother to our lead actress played by Jennifer Tisdale. My wife, Gwendolyn Garver, played a supporting role along with David Fletcher.
It seems like you could have set this story in a few different metropolises. You're from London originally, so why set this story in Los Angeles?
Well I moved to LA about 7 years ago, I have shot many movies in London which I am very proud of, London is a great backdrop with it's historic buildings. I think people forget how much history Los Angeles has, there is so much to uncover in Hollywood.
On this blog I often do posts on classic film locations. I think sometimes it's just as exciting seeing where films were made as seeing the movies. Can you tell us about some of the locations you filmed at?
We found a 14 story office building (Van Nuys) that was abandoned during the 1994 Northridge earthquake, we had total access but there was no power on each floor which made my crew go a little mad. All of our sets were built inside this building on the 1st floor, we had 4 sets built in total, from a torture chamber to apartment buildings. For the exterior shots of each apartment building we visited Downtown LA, where there are many old buildings that have the 'New York' feel, we chose two great looking buildings on 7th and Olive.
Now let's turn to you. Why did you leave London for Los Angeles?
I have loved LA ever since I was a young boy, I grew up watching Chaplin and Harold Lloyd movies and dreamed of making movies in their town. I ran the New York Film Academy in London and that's where I met my wife 'Wendy', we both decided that Hollywood was the place to start. 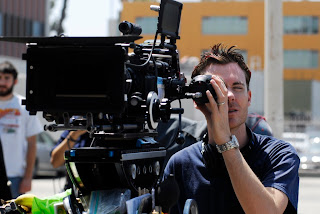 Douglas Elford-Argent at the camera.
Did you always have an interests in films?
Yes right from when I turned 11 years old, back then I wanted to be a camera operator, but I have never wanted to do anything else but make movies.
What are some of your favorite movies? What films have really inspired you as a filmmaker?
That's always a tough question, there are movie that inspire me as a director and I learn so much from their work, but there are movies that I simply wish I could have my name on them. I learn a lot from David Fincher (Seven, Zodiac) and Spike Lee (Do the Right Thing, Malcolm X) both these directors showed me both camera and acting skills. I am a big fan of disaster movies so I envy Irwin Allen and his franchise.
Who are some of your favorite classic actors/actresses/directors?
Directors I love - Lee and Fincher, for actors I love Downey Jr and DiCaprio.
Getting back to The Brazen Bull, where can people go to see this movie?
It's hard to book theaters for such a small movie, but our film is available everywhere on DVD, there is also a great behind the scenes featurette on the DVD too, or people can watch the film being made at http://www.youtube.com/lucksterproductions
Thanks for taking the time to answer a few questions. Any last comments?
I hope I can continue to show Hollywood as a growing city and not a has been.
Posted by Robby Cress at 8:36 PM