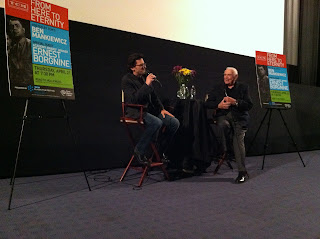 Ben Mankiewicz and Ernest Borgnine
If you think Ernest Borgnine seems animated on screen you should see just how energetic he is in person.  On Thursday, I had the opportunity to hear Borgnine share some personal stories during a discussion with TCM host Ben Mankiewicz, at the Egyptian Theatre in Hollywood, as part of TCM's "Road to Hollywood" series. I was amazed to see, at the age of 94, Borgnine is still a sharp and enthusiastic storyteller.
For those who don't know, Turner Classic Movies has been doing a series of classic movie screenings in major cities all around the country, as a build-up for their second annual TCM Classic Film Festival which takes place next week in Hollywood. Each screening has featured either TCM host Robert Osborne or Ben Mankiewicz doing a discussion with one of the stars of the film being shown. In this final road stop, the classic film was From Here to Eternity, and the discussion of course, was between Ernest Borgnine and Ben Mankiewicz.
The discussion between Mankiewicz and Borgnine was delightfully long, covering such topics as how did Borgnine get into acting, meeting Sinatra for the first time, and working with Montgomery Clift on From Here to Eternity. I recorded just a few minutes of the beginning of the discussion which I've split into the videos below. My favorite is the video labeled "Part Three" in which Borgnine explains how he got his big break in Hollywood.

Ben Mankiewicz and Ernest Borgnine Discussion Part One
In this first video Mankiewicz asks Borgnine, "why did you become an actor?"

Ben Mankiewicz and Ernest Borgnine Discussion Part Two
In this second video Borgnine talks about acting in a school play, enlisting in the Navy, and his early acting training.

Ben Mankiewicz and Ernest Borgnine Discussion Part Three
In this third video Borgnine is asked how he got his first big break?

How wonderful you attended this! Thanks so much for your report.

Was it very crowded? I seriously considered attending, but was reluctant to risk the gas money from Orange Co. (at current prices!) without a guaranteed seat...especially since I've made so many trips to the Egyptian lately.

Loved hearing about this!

I was also unsure what to expect crowd wise. I got out of work early so I arrived at 5:30 (the event wasn't to start until 7:30). When I got to the Egyptian there was just a small crowd gathered in the courtyard, but by 6pm, the line quickly filled up. The theatre was mostly full but not sold out. There were still some empty seats up front off to the sides.

I can't believe gas prices right now! I don't blame you for not wanting to risk wasting gas on the drive from Orange County with no guarantee of getting in.

Thanks for the feedback! Was very interested to hear more details about the event. So glad you had no trouble getting in!

Had the chance to watch BACHELOR IN PARADISE today and linked (again!) to your wonderful post about the locations. What a gorgeous film! I loved the quip by Hope that his rental home was decorated in "early Disneyland."

Borgnine is a wonder! Amazing and heartening to see him to absolutely bright & funny at his age -- really impressive! What a guy! Gives us a role model to aspire to -- aging with wit & energy! Thanks for sharing these clips!

Great post, Robby! I've been a huge Ernest Borgnine fan ever since I was 9 years old (I used to watch 'Airwolf' religiously). I wanted to share with you a little gem I found online where Ernie shares with us one of the secrets of his longevity.