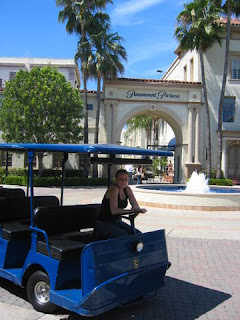 Emily outside Paramount's Bronson Gate
"Badges? We ain't got no badges! We don't need no badges! I don't have to show you any stinking badges!" - The character "Gold Hat" from the film, The Treasure of the Sierra Madre
Ok, so studio Pages do need badges in order to get on to the movie studio lot where they work, but once they are on the lot, they often have unlimited access to the studio. Pages wear many job hats that allow them to see the studio from many different perspectives. A Page might be giving tourists a tour of the lot one day, assisting with audience coordination for a television show the next and then even running an urgent errand for a studio executive the next. As a studio Page, you never know what type of assignment will come up next or who you might run into.
Unlike most jobs at a movie studio, the Page gets to see almost every part of the factory in operation and because of this, they often have many interesting experiences to share.  That's why a while back I did two Q&A's with former Pages as the start of a series on this blog. To continue that series I've asked Emily Ronkar a few questions about her experience as a former Paramount Studios Page.
Emily, what year(s) did you work as a Page at Paramount Studios?
From 2005-2006, a full year from July through the following August
How did you find out about the Paramount Page program and what made you interested in applying for that position?
A friend at a part-time job I was already working had mentioned it to me.  He told me about his previous experience some years before as a Page.  Because of my love for film, appreciation for film history, and general desire to work on a studio lot, this seemed like the perfect opportunity for me.
What kinds of duties were you assigned as a Page?
Most of my days were as a tour guide or working the audience entrance/exit for the sitcoms.  While at Paramount I was also lucky enough to work two Stunt Man Awards Shows, assist at the American Music Awards, and temp for several different departments on the lot, which aided in a wider appreciation for what goes into creating a film.
What was your most unusual assignment at Paramount?
For the Paramount Christmas party, myself and a couple other Pages dressed up as elves and a Mrs. Claus and assisted with the family/kids Santa pictures. 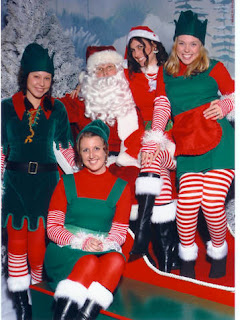 Emily (seated in front) dressed as an Elf
What was your most interesting experience?
On my lunch break I liked to wander the lot and one lovely wandering day, I happened to stumble upon a live elephant in Chicago street.  A commercial was being filmed on New York street and the elephant was being kept and cared for a street away.  Quite the shock to round a corner to a full-grown elephant!
What was your least favorite experience?
When I look back, I don’t really remember anything being my “least favorite”.  There was only one temp position I did not enjoy so much, but the people I worked with were wonderful, and I learned a lot while I was there.
Also, an unpleasant run in with a regular audience coordinator for one of the long running shows filmed on the lot, but despite the frustration caused by this individual, I learned a better way to deal with difficult people in that environment.
Any celebrity run-ins?
You were always running into familiar faces and names regardless of where you hung out on the lot.  Two of my favorite random sightings include Tim Burton entering the main Bronson gate entrance, and Jonathan Rhys-Meyers on a break outside a stage where MI:3 was filming.
Three of my favorite celebrity run-ins are:
I've asked this question to two other Pages and I'll ask you, did you encounter any old Hollywood ghosts or hear any of the stories?
I had definitely heard the stories, mostly from security guards who worked the night shift in the New York/Chicago street areas, since those walls bordered the Hollywood Forever Cemetery.  Plus, there was always the odd haunted stage story that would rumor it’s way though each Page class.
The only odd experience I ever had on the lot was a night when a former Page from my class and I were hanging around the MI:3 set after working an audience show that night and were headed back across the lot to our cars, we happened to walk through the New York and Chicago streets, both our favorite places on the lot.  When we were on the far side of Chicago street, before it meets up with the stages, and turns the corner back into New York street, the air around us seemed to get eerily quiet, despite all the filming happening on the other side of the lot.  I remember the lights on the side of the false sets flickering and going off and on, pitching the street into random darkness.  Then suddenly, everything went back to normal, light came on, the air around us felt like it lifted.  We high-tailed it out of there, laughing, either from fear or nerves.
Would you recommend a Page program for others entering the work world, especially those pursuing careers in entertainment?
Absolutely!  The Page program was such an integral part of getting my feet wet in LA and the Entertainment industry here.  I met so many interesting people and had opportunities to work and learn in and about so many other facets of the industry I hadn’t even thought about!
What is happening in your post-page life? Where are you working or what projects are you involved with? Has your Page experience helped you in what you are doing now?
I am currently working for Click Communications, a fabulous online PR company.  Specifically I work as a Video Asset Specialist primarily with one of our major studio clients, but assisting in video clip pulling with several other clients as well.
I would definitely agree that the Page experience has helped me in what I do now.  I have a much broader vision of the studio system and the inner workings of the business and production side of the industry, the first steps of which I learned while a Page.
Now, because this blog focuses on old Hollywood, here are a few quick questions about the classics:
Favorite classic movie?
Double Indemnity, an amazing film noir movie that has stuck with me since my first viewing in a college film course.  Intelligent, subtle, distinctly dark and a bit snarky.  All of my favorite things!
Favorite classic movie actor?
Charlie Chaplin; ever since I saw City Lights I’ve been amazed at what one man was able to accomplish and the brilliance behind each of his films.
Favorite classic movie actress?
Marlene Dietrich was always a favorite.  She was just so sassy!
Posted by Robby Cress at 8:36 AM

That was so interesting!

Good interview. What Paramount soundstage was "Double Indemnity" shot at? While there are markings listing projects shot at each stage, almost all of them are post-1948*, since Paramount currently doesn't have the rights to most of its pre-'48 product. Come on, Paramount, if you acknowledge your earlier luminaries through names of buildings (Lombard, Lubitsch, Colbert, Crosby, etc.), you might as well let us know specifically where they worked.

*The former RKO stages are an exception.