2011 Tiki Celebration at the Egyptian Theatre 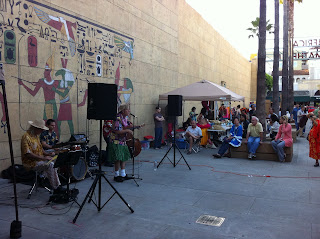 King Kukulele and his Friki Tikis
This past Saturday, the Egyptian Theatre in Hollywood hosted their annual Tiki Celebration which included performances by the comical and kitschy performer King Kukulele and his Friki Tikis, Polynesian food and tropical drinks at neighboring Maui & Sons restaurant, vendors selling tiki themed products, a tiki fashion show, a tribute to legendary Disney clown Wally Boag for his contributions to the Disney tiki themed attraction, "The Enchanted Tiki Room," and a screening of the 1951 Polynesian themed film, Bird of Paradise. It was a beautiful summer evening in Hollywood, perfect for such a tropical themed event. Although the turnout was not large, it was great to see such a diverse group in attendance. There were young kids probably experiencing tiki culture for the first time, older adults who probably have been sipping strong tropical drinks from tiki mugs for many years, and everyone in between. 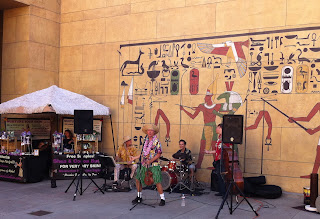 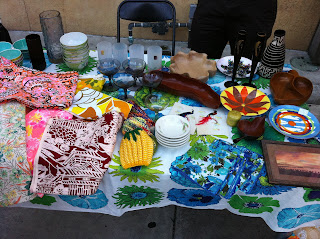 Tiki Crafts
I only have two complaints with the Tiki Celebration.
First, the way I interpreted the event info on the American Cinematheque website, was that Maui and Sons restaurant would be serving BBQ and Polynesian themed drinks in the courtyard. This was partially true. If you were lucky enough, you could eat/drink in the courtyard but only in the area attached to the Maui & Sons restaurant near the entrance of the courtyard. The thing is, you could hear the music from that location but not watch the performers. The other option was to go inside the restaurant and not see nor hear the musical performances at all. I figured the restaurant would have some kind of catering set-up to serve the attendees in the courtyard where they could eat, drink and still watch the music. At the TCM Classic Film Festival they didn't serve food, but they did at least have a station to order drinks which you could then take with you around the Egyptian Theatre courtyard. I thought the Tiki Celebration would be set up in a similar manner.
Second, when my friends and I arrived at the theatre, just a few minutes past the start time of 5pm, we couldn't find anyone around who was working the event. There was no one at the ticket booth to pick-up will call tickets, no one at the doors to the theatre or in the courtyard, or at least anyone making themselves noticeable, to answer questions. When you go to a regular theatre, a restaurant, a hotel, and many other service oriented businesses, there is usually some kind of host/hostess to greet guests and answer questions. I wish the Tiki Celebration would have had some kind of host available to answer questions. That way, instead of listening to rumors from other clueless attendees who said the festival would be bringing food/drink to the courtyard where the performance area was, I could have asked someone official working the event and found out that I should have gone straight to the restaurant to grab a decent spot.
Nevertheless, my family, friends, and I still had a good time. I mention the above only so that maybe next year these two items could be fixed for an even better experience. 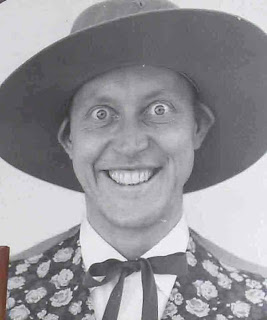 Disney Legend, Wally Boag
After the musical performances outside in the courtyard, the event moved inside the Egyptian Theatre. King Kukulele hosted a tiki fashion show, where women dressed in tiki fashions, such as Polynesian inspired dresses, sarongs, and grass skirts strutted their way to the front of the theatre. This was followed by a video tribute to Disney comedian, Wally Boag, which was shown on the Egyptian's huge theatre screen. Boag was most famous for his performances in the long running stage show at Disneyland, "The Golden Horseshoe Revue." Boag also added his comedic talents to many other Disney related projects, including writing most of the script and doing voices for the the attraction, "The Enchanted Tiki Room." Boag unfortunately passed away earlier this year, but he had attended the Tiki Festival a couple of years ago to talk about his experience at Disneyland and his involvement on the Enchanted Tiki Room attraction.
Another Disney legend, Richard Sherman, who wrote the song, "The Tiki Tiki Tiki Room" for the Enchanted Tiki Room attraction was supposed to attend this years Tiki Festival, but turned out unable to make it. 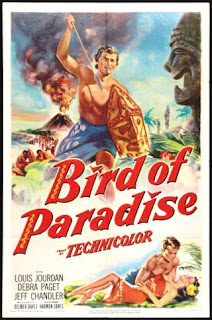 Bird of Paradise (1951)
After the tribute to Wally Boag, the event ended with the feature presentation, the 1951 film, Bird of Paradise. The film, beautifully shot on location in the Hawaiian islands, is quite stunning to watch on a large screen. The story however, is a bit campy. I felt like I was watching one of those cheesy films that the television show, Mystery Science Theatre 3000 would have poked fun at.  I don't think I'll need to watch this film again, but it was fun to watch to go with the whole Polynesian/tiki theme for the evening.
All in all, the Tiki Celebration was a fun summer event that I hope will continue in future years and continue to grow each year with new offerings. If you want to learn more about the tiki culture, a good starting pointing is the Tiki Magazine website.
Posted by Robby Cress at 3:55 PM

Email ThisBlogThis!Share to TwitterShare to FacebookShare to Pinterest
Labels: Disney

I'm so jealous! I'm fascinated with tiki culture, but since I moved back from the west coast, tiki bars and all the associated stuff are pretty much nonexistent. I'm glad you had a good time.

Robby,
I am so glad to hear the Egyptian is still there. Glad you were able to go!

Darn, I wish I had known about this! I would have gone!!!

Sounds like a whole lot of fun! Thanks so much for sharing this neat event at the Egyptian! Would have enjoyed seeing that Debra Paget film, really does sound perfect for the theme of the evening. :)

This is so much fun! I wish there was more tiki stuff here in New York.

I'll be going to LA in a few weeks. Any suggestions for Old Hollywood stuff to do? Tours, sights, etc.

I would look into tours offered by the Hollywood Heritage Museum and the LA Conservancy. One of my favorite LA experiences are the classic films shown at Hollywood Forever Cemetery put on by Cinespia - although, these screenings have gotten a little too popular and the crowds are a little much. You should also see a movie in the Chinese Theatre in Hollywood, and grab a bite (or at least a drink) at Musso and Frank's. Maybe do a studio tour. Warner Bros. and Paramount both offer pretty good tours (although, the experience can vary greatly depending how good your guide is. Nevertheless, it's always exciting to walk around the backlots where so many films have been made. By the way, if your guide is good, give him or her a few bucks for a tip. There are just so many classic Hollywood things to see and do, but too many to name. You might find some other interesting sites just from scrolling through some of my previous blog entries. Hope you have a great visit to LA!