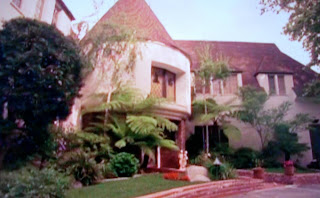 4053 Woking Way, Los Feliz
(c) The Walt Disney Company
Apparently, one of the realtors showing Walt's former home at 4053 Woking Way says that there was no pool at the house when Walt lived in the home? This doesn't seem quite right to me. I remembered that in the documentary film, Walt: The Man Behind The Myth, Diane Disney-Miller, Walt's daughter, shared her memories of the home in the Los Feliz hills. Diane specifically mentions how she had fond memories of Walt's animators coming over to use the pool and for barbecues.
The photo at the top is a screenshot of how the home at 4053 Woking Way looked at the time of the documentary. This is the house that they show as an establishing shot when Diane goes on to talk about the pool. The documentary then shows some vintage home movie footage of one of Walt's pool parties. The two black and white screenshots below show how the pool looked. What's amazing is how undeveloped the Los Feliz area looks in the background. If you own the DVD, this clip is about 35 minutes in. 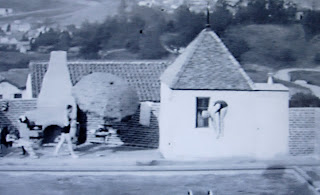 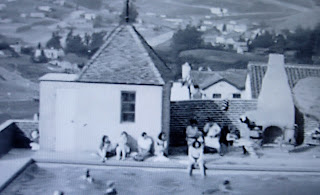 An undeveloped Los Feliz can be seen in the background.
(c) The Walt Disney Company
Does anyone have more information on the swimming pool at Walt Disney's 4053 Woking Way home? I'm assuming Walt's daughter's memory and the vintage home movie clips are correct and there was a pool. Perhaps, more likely, the realtor meant that the pool at the home today isn't the original pool?
Posted by Robby Cress at 7:43 AM

I got a guess. It looks like we are facing Woking Way looking southwest. The Snow White house is behind us, the landscape matches up but it is a little hard to tell. They just added a sunroof to the right. What'cha guys think? This has to be it...

Looking at the satellite view and comparing with the old footage they are definitely two different pools. The current pool goes lengthwise away from the house where the old pool runs parallel to the house. The house actually looks like they added on and refaced some of it.

It appears to be the same pool to me. The edging of the pool matches the footage, but it does look like there was some resurfacing of the area around the pool at some point. I have heard the house has not been changed at all in 30 years, so any changes would have probably been made by the prior owner.

Come to think of it... I recall reading on some piece of real estate literature that there were renovations in 1935. Perhaps the pool arrived at that point and was not in fact "original" to the house in 1932.

The existing pool shown in those old black and white photos is still there, however, there is an additional house built in the 60's between. See here: http://www.4041wokingway.com/?utm_source=4041+Woking+Way+Lease&utm_campaign=4041+Woking+Way&utm_medium=email
The original pool was a decent distance from the Disney home and at some point the pool and the property in between was carved out into an additional lot. The pool and bath house became a part of that newer home. The steep traditional roofs were torn off of the bath houses and a flat roof was added connecting all and covering the original outdoor fireplace. You can see it all in the google view posted in the comments above.

Thats it! Thanks David. I dont knw why that didnt dawn on me.