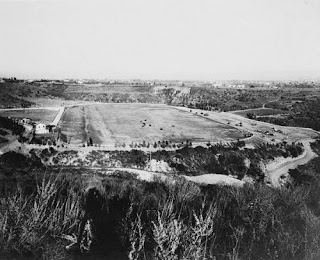 Will Rogers Polo Field
When I think of the sport polo, the one where men or women on horseback gallop across a giant field and swing mallets at a ball, I usually think of wealthy, high class, international types. I don't really think of polo as an American sport, although, in the 1930s, polo was much more popular in America, particularly in Hollywood.  According to the Pacific Palisades Patch, there were more than 25 outdoor polo fields in the Los Angeles area in the 1930s. Today, there is only one, at the Will Rogers State Historic Park.
My earliest memories of polo are of watching some of the early Disney animated shorts. There were a few Disney cartoons that featured polo in the story line, but the one that stands out the most was a 1936 short called Mickey's Polo Team. In this short, Mickey Mouse, Goofy, Big Bad Wolf, and Donald Duck play against a team of movie stars, which included Stan Laurel, Oliver Hardy, Harpo Marx and Charlie Chaplin. Not surprisingly, during the 1930s, Walt Disney was a fan of the sport and would often play in weekend matches at Will Rogers' polo field.
Mickey's Polo Team
Many actors played polo during this time, including Clark Gable and Leslie Howard, but one of the most avid players was actor Spencer Tracy. Actresses such as Joan Crawford, Barbara Stanwyck, and Joan Bennett could be seen in attendance as spectators. Studio executives also played the game too.  Darryl F. Zanuck was even known to carry a mallet around his office and the 20th Century Fox studio lot. After matches at Will Rogers' polo field, Rogers and his friends would go to to the Polo Lounge at the Beverly Hills Hotel. The restaurant acquired its name because of all the movie stars visiting the restaurant after polo matches. 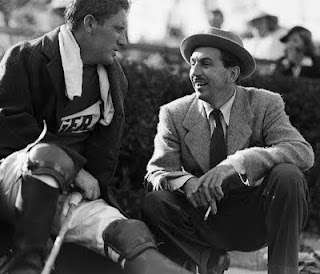 Thanks for the historic polo info! I never knew it was so big in Hollywood. Great post!

According to the book, "Clark Gable: biography, filmography, bibliography" by Christopher J. Spicer, Clark Gable took up polo, but quit when the studio told him it was too dangerous. The Will Rogers Polo Club site also mentions Clark Gable as one of the stars who "mounted for practice games". Clearly Gable didn't play professionally, but he must have played some practice matches before being told to quit. I'm sure quite a few stars picked up a mallet while it was fashionable in the 1930s, but whether they stuck with the hobby or not is another matter.