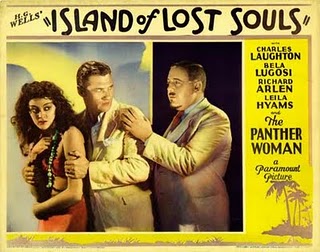 October is here and Halloween is just around the corner. That means a month of thrills and chills. For a classic movie fan like me it means a month of viewing creepy films to get in the Halloween spirit and fortunately, in Los Angeles, there are numerous theaters showing some scary films to pull me away from my Netflix marathons at home. Here are some of the upcoming screenings that I am marking on the calendar.
On Thursday, October 6, at 6:30pm the Egyptian Theater in Hollywood will be doing a double feature of Island of Lost Souls (1932) and Dr. Jekyll and Mr. Hyde (1931). Filmmaker John Landis will be on hand to introduce the films and to sign copies of his new book, "Monsters in the Movies." 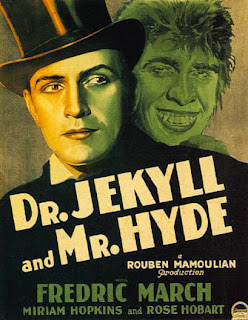 Island of Lost Souls is an adaptation of the H.G. Wells book, "The Island of Dr. Moreau" and stars Charles Laughton, Bela Lugosi, Richard Arlen and Kathleen Burke.
The 1931 version of Dr. Jekyll and Mr. Hyde stars Fredric March in the dual roles of Jekyll/Hyde and Miriam Hopkins as the barmaid Ivy Pearson.
Visit the American Cinematheque website for full details by clicking here. 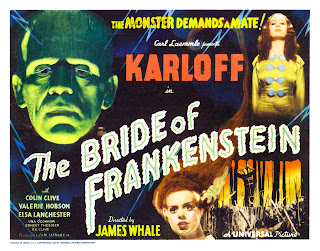 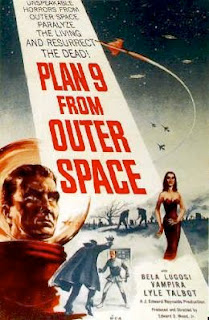 On Saturday, October 22, at 2:00pm, one of my favorite theaters, the Alex Theatre in Glendale, is showing the campy Ed Wood film, Plan 9 From Outer Space. This film stars Bela Lugosi, Vampira, and Lyle Talbot. For full details including ticket information click here. 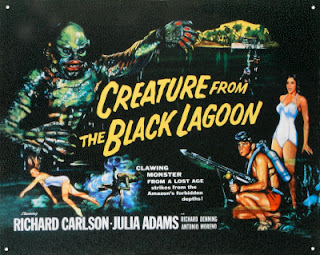 On Thursday, October 27, at 7:30pm the Egyptian Theatre will be showing the Creature From the Black Lagoon (1954) in anaglyphic 3-D! The film stars Richard Carlson and Julie Adams. Actress Julie Adams will be at the Egyptian to discuss the film and will be available to sign copies of her new book, "The Lucky Southern Star: Reflections From the Black Lagoon" before the film. This is part of a double feature, the second film being Bend of the River (1952), starring James Stewart, Arthur Kennedy, Rock Hudson and Julie Adams. 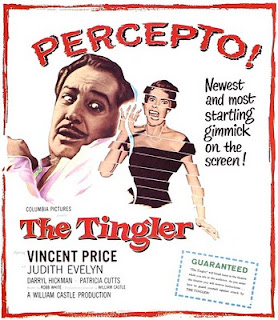 All month long the Cinefamily will be showing horror fair at the Silent Movie Theater. On Tuesday, October 4, at 8pm, animation historian Jerry Beck will be programming a "monster mash-up" which, according to the Cinefamily website will include, "classic cartoon monsters, spooks and witches - from Casper the Friendly Ghost and Witch Hazel through TV's Groovie Goolies and Milton the Monster, all on the big screen using rare 35mm and 16mm film prints that range from ghoulishly red Eastmancolor or gorgeously garish Technicolor." Other films that will be shown during the month of October include the silent picture, The Bat, Fright Night, Halloween II, Nightmare on Elm Street III, Friday the 13th IV, and Death Becomes Her. And to cap things off, on Monday, October 31, the Cinefamily will be presenting the Vincent Price classic, The Tingler (1959), in "Percepto"!
View all of the upcoming Cinefamily screenings here.
Also, the New Beverly Cinema will be showing three double features of horror:
October 23, 24 - A Nightmare on Elm Street / Wes Craven's New Nightmare
October 28, 29 - The Burning / Friday the 13th
October 30, 31 - Island of Lost Souls / Them!
Visit the New Beverly Cinema for more information by clicking here.
Posted by Robby Cress at 10:14 AM

Wow, Robby, all kinks of spooky stuff going on in Hollywood! You are so lucky to be able to pop into the Egyptian for catch a movie!

Great list of movies. "The Tingler" scared my wife to death as a kid. She might enjoy it again. And it's too bad that the screenings at the Hollywood Forever Cemetery are done for the season. Would make a great Halloween movie destination. -- Paul D. Marks

All three films star the legendary Bela Lugosi as the Monster.

Uh oh, I wonder what Boris Karloff has to say about this...