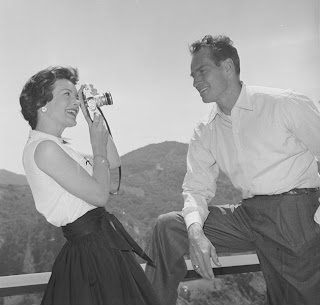 Charlton Heston with wife Lydia at home.
He fought for mankind in Planet of the Apes, he battled zombie, vampire like beings as the last man on earth in The Omega Man, he saved a 747 from disaster in Airport 1975, he saved many of LA's citizens in Earthquake, and in 1994 Charlton Heston saved some Wisconsin ticket holders from missing the Rose Bowl football game.
According to the blog Wisconsinology,

"Many counterfeit tickets had been sold before the game. The sudden infusion of Wisconsinites into Los Angeles caused two things - one, a city wide beer shortage and two, a hot market for illegal ticket sales. Outraged by the news that ticket sharks were preying on helpless visitors, Charlton Heston graciously opened his home to anyone caught without a seat. There, they could watch the game on Heston's wide screen state-of-the-art home theater."

If I flew cross country to watch the Rose Bowl game only to learn that my tickets were fake, I think watching the game with God (Heston did the voice of God in the film the Ten Commandments) at his modern designed home high atop Beverly Hills, would be a pretty nice alternative.

Heston's wife of fifty years was from Two Rivers, Wisconsin. To read more about other Hollywood, political, musical, and pop-culture significant figures connected with Wisconsin I recommend reading the entertaining blog Wisconsinology. 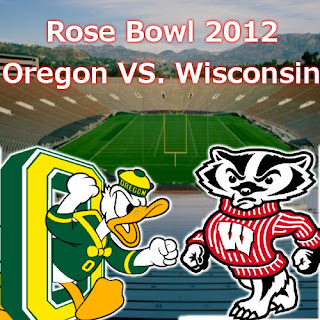 The #9 Wisconsin Badgers are once again back at the Rose Bowl, this time as the underdog taking on the #6 Oregon Ducks. The game will be on January 2, 2012 at the Rose Bowl stadium in Pasadena, California.
Posted by Robby Cress at 11:40 AM

Thank you Moses! And go Badgers!

Wow, what a cool story.