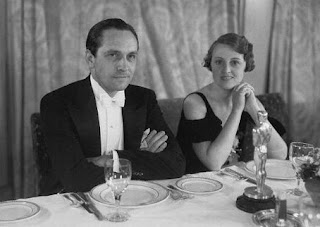 Nearly eight decades later and the same argument is still taking place in politics!
To read more about actor Fredric March please visit the blog Sittin On A Backyard Fence where many bloggers are contributing entries on all aspects of March's career.
Posted by Robby Cress at 7:25 AM

A fascinating insight into politics, then and now; I guess the more things change the more they really do stay the same. I’m vaguely familiar with the events from programs devoted to California during the Depression, and the background on the Sinclair/Merriman election campaign is intriguing for two reasons: I had the idea in the back of my mind that Harry Chandler and the LA Times was somehow responsible for the dirty campaign against Sinclair. I wasn’t aware that Irving Thalberg produced the inflammatory films or of the discussion between Thalberg and Fredric March. Thanks for sharing this fascinating insight into the character of Fredric March and the golden age of Hollywood politics.

Well, I was going to say 'the more things change...' But I see someone's already beaten me to it.

HIstory does repeat itself!

What an interesting article - so fascinating to see, once again, that the more things change, the more they say the same. Thanks for this timely post!

Fredric and Florence were incredibly active in liberal causes for years. The couple were targeted by HUAC. They also sued the red hunting publication Counterattack! for libel...and won.