Inside the Script eBooks, More Than Just a Screenplay 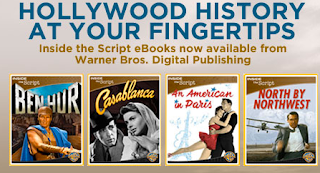 With the new "Inside the Script" eBooks from Warner Bros. film fans can read classic movie scripts like North By Northwest or Casablanca and also delve deeper into the making of the film with supplemental chapters on the film's development and production. The eBooks will include items like costume sketches, on-set photographs, production notes, and storyboards with internal links that immediately take you from the scene to the additional content. I have yet to read one of these new eBooks but I love the concept. I think I may start out with one of my favorite films, North By Northwest, but I would like to see one done for the film Sunset Boulevard (but that one will probably require approval by Paramount).  Other eBooks in the series include the epic Ben Hur with Charlton Heston and An American in Paris with Gene Kelly and Leslie Caron.

The eBooks are available for Kindle, Nook by Barnes and Noble, and iBookstore and the cost is $9.99 per eBook.