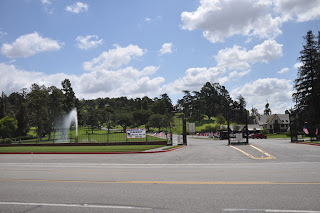 For a Memorial Day weekend activity my wife and I took our two month old daughter Hazel to visit some classic Hollywood stars at Forest Lawn Memorial Park in Glendale, California. This cemetery, established in 1906, is one of my favorite locations in the Los Angeles area. For an area that can sometimes feel too brown, dusty and dry Forest Lawn is a nice little escape into rolling green hills, trees, large water fountains, and flowers. As far as cemeteries are concerned, Forest Lawn is gorgeous. There are also the added sites of art exhibits, buildings modeled after old world architecture, and spectacular views looking over Glendale and out to downtown Los Angeles. On this visit though, we had one specific destination inside the cemetery grounds in mind; the Freedom Mausoleum and the Court of Freedom. 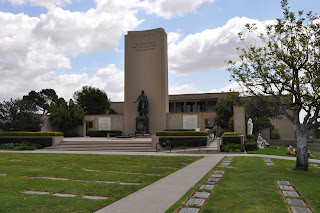 Looking towards the Freedom Mausoleum

There are many different areas around the cemetery, each with a distinct name, and the Freedom Mausoleum and Court of Freedom are located near the back of the cemetery grounds at the top of one of the winding hills. There are several old Hollywood celebrities that can be found in this area including Chico Marx, Gummo Marx, Clara Bow, George Burns and wife Gracie Allen, Nat King Cole, Alan Ladd, Spencer Tracy, Errol Flynn and Walt Disney to name a few. 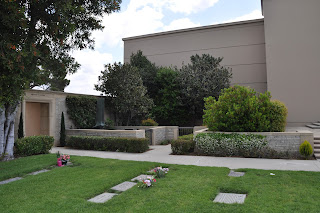 Walt Disney's garden is to the left of the Freedom Mausoleum.

Our first visit was to a garden located just to the left of the Freedom Mausoleum entrance. There is a short stone wall with a little gate. If you open the gate and look up at the wall that is often covered by trees and large plants you will see a plaque with the names of Walt Disney, his wife Lillian, his daughter Sharon and her husband Robert Brown. Unfortunately, when we mentioned Disney to Hazel, she was expecting rides. She was a bit disappointed. 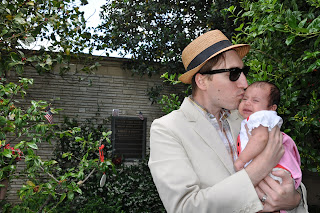 "No rides, Daddy? Just a plaque with some names?"

We then went inside the Freedom Mausoleum to visit the husband/wife comedy team, George Burns and Gracie Allen.  Their crypt reads, "Together Again." Gracie died in 1964 and Burns didn't pass away until 1996 - thirty-two years later! George Burns loved Gracie and missed her very much after she passed away. For a very entertaining and funny read about their relationship, I recommend the book Gracie: A Love Story, written by George Burns.

The following is an excerpt from the book:

Gracie died in 1964, and I still go to Forest Lawn Cemetery once a month to see her. I stand in front of her marble monument and tell her everything that's going on in my life. I told her I was writing this book about her, for instance; evidently she didn't mind, she didn't say anything. When the television program "60 Minutes" did a segment about me, I took their crew to Forest Lawn. "Imagine that, Googie," I told Gracie. "After all this time we're working together again." I don't know if she hears me, but I know that after speaking to her, I feel better. 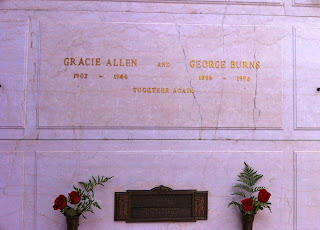 A crypt next to George and Gracie is another couple where the husband long outlived the wife: Gene Raymond and Jeanette MacDonald. MacDonald passed away in 1965 and Raymond didn't go until 1998! Their crypt reads "Beloved Husband" and "Beloved Wife." 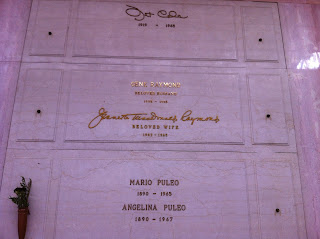 Next we headed back outside the mausoleum and walked out front to the Garden of Everlasting Peace. Inside this garden courtyard is one of my favorite actors, and in the minds of many, one of the greatest American actors to have ever lived, Mr. Spencer Tracy. 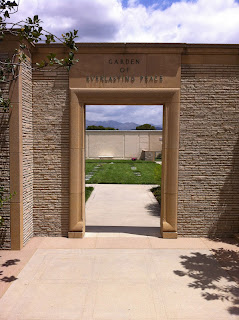 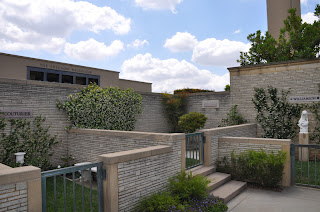 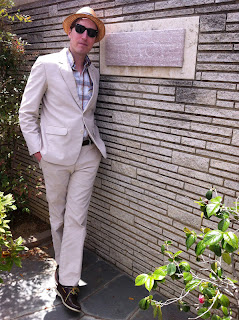 The marble tablet only reads "Tracy."

Unless you know where you're looking, finding some of the celebrity grave sites can be difficult. Forest Lawn is a massive cemetery. However, if you can make your way to the Freedom Mausoleum, you will be able to find quite a few recognizable names both inside and around the grounds outside.

Cool post. Whenever I am in the area, there are two graves I visit to pay my respects: Walt Disney and Larry Fine.

Thanks Connie. For classic movie fans its amazing how many of old Hollywood's stars are in this one area. Thanks for mentioning that Larry Fine is another one.

Thank you for a great tour (and a peek at Hazel, too!). I enjoyed seeing that Nat King Cole is just above Jeanette MacDonald -- kind of neat to see those great musicians' names side by side.

Yes, Nat is just above Gene and Jeanette. And Ladd and Bow are also in the same wing (although can't be seen in the pictures above.)

You're welcome for the tour and the peek at Hazel. :) I'm sure she will figure into my blog more in the future too as she continues to be immersed in all things classic Hollywood.

Robby,
Great visit. Someday you may be able to come up here to Lone Pine, and visit the location of one of his great movies, "Bad Day at Blackrock".

I would love to get up to Lone Pine. "Bad Day at Blackrock" is one of my favorite Tracy films, probably my second, right behind "Fury." That will definitely be a future weekend trip!