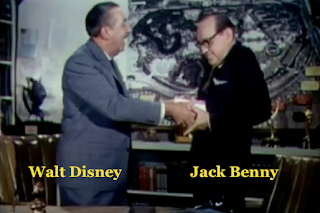 Comedian Jack Benny was famous for being a cheapskate. True to his image, in this hilarious video, Benny visits Walt Disney at his office to try and score 110 free tickets to the Disneyland theme park. Instead of taking the cast and crew of his television show out to dinner, Benny wants to treat them to a trip to Disneyland. Walt thinks this is a great idea, but this is before Benny mentions that he wants the tickets for free. Benny reminds Walt that he gave him 4 complimentary tickets to his television show. Walt reminds Benny that that was 9 years ago.

The best part of the video is at the very end. In exchange for the free tickets, Benny explains to Walt that on his television show they have a foreign actress guest star, and that they are going to make a foreign style film. Benny mentions that he is going to rewrite the whole sketch so that it has a "Disney approach." Walt is skeptical of Benny's idea, but Walt knew better than anyone how publicity on television was a great way to promote his upcoming films and theme park attractions.

For the sketch, Benny rewrites Walt's latest film, Mary Poppins, so that it has an Italian feel. Benny has his guest star, foreign actress Elke Sommer, playing a sexy Italian Mary Poppins. In the sketch, Benny, made up to look Italian with a big dark mustache asks Sommer what she wants for lunch. She responds with, "cheese" and then goes on to sing in the tune of "Supercalifragilisticexpialidocious" the words, "mozzarella, provolone, parmesan, ricotta." Sommer, Benny, and two young Italian looking kids then break out in song singing about cheese. I will never be able to watch Mary Poppins again without thinking of cheese.

To be fair, in real life Benny was not the tightwad persona he created, but he was so good at playing up the image for laughs.
Posted by Robby Cress at 12:16 PM

Hi Rob, Great post on Jack Benny and Walt Disney. I sort of remember seeing him at Beverly Park when I was a kid. And the story on Forest Lawn was pretty trippy...

So funny! Walt Disney was such a good sport. I love the tiger, too!
*typo in second paragraph "new" should be "knew"
http://thegreatkh.blogspot.com/

And laughs are what we need more of. Great clip.

That would have been a trip seeing Benny and/or Walt at Beverly Park! That's the thing about Los Angeles - you never know who you could run into and where.

Yes, I thought the same thing. Walt really is a good sport! And the tiger is a great touch, along with the talking bird. It's just like watching one of Walt's intros to his own show. And I've corrected the typo!

Laughs are always welcomed and whenever I watch Jack Benny I can't help but laugh.

Thanks Connie. Glad you liked!