Inside The Beverly Hills Hotel 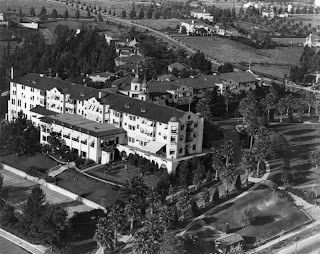 A few weeks ago CBS Sunday Morning ran a colorful segment on the legendary Beverly Hills Hotel, sometimes called the "Pink Palace." If you missed it you can watch the video below. The Beverly Hills Hotel was one of the first major hotels built in Los Angeles. In 1912, when the hotel opened, the area surrounding the hotel was mainly bean fields and empty land. The hotel was actually created to help attract buyers to what was then a new real-estate development. And attract buyers it did!

Some of the first people to check into the hotel were Hollywood's first major stars including Douglas Fairbanks and Mary Pickford. Ever since the hotel would be popular with the Hollywood crowd and that open land around the hotel would become covered by celebrity mansions. In the 1930s, when polo was all the rage, one of the hotel dining rooms was a popular hangout for post-match drinks. Will Rogers, Spencer Tracy and film mogul Darryl Zanuck were some of the celebrities who could have been seen in what was later to be named the Polo Lounge.

The video features some anecdotes about celebrities who stayed or lived at the hotel.  One of my favorite anecdotes is about eccentric millionaire Howard Hughes who lived in bungalow 4 on the hotel grounds. According to the video the hotel had a staff member tasked with placing roast beef sandwiches in the trees so that Hughes could sneak out for a midnight snack in privacy. Another interesting bit of trivia is that Elizabeth Taylor spent six of her eight honeymoons at the hotel!


The Beverly Hills Hotel has also been used as a filming location. Designing Woman (1957), Who's Got the Action (1962), Move Over, Darling (1963), Who's Been Sleeping in My Bed (1963), Valley of the Dolls (1967), and California Suite (1977) are just a few of the films that feature scenes of the hotel. Some of the earliest movies filmed at the Beverly Hills Hotel go back to the silent era. Comedians Charlie Chaplin and Harold Lloyd both made films at the hotel.

Have you ever stayed at the Beverly Hills Hotel or perhaps dropped in to the Polo Lounge for a drink?
Posted by Robby Cress at 9:30 PM