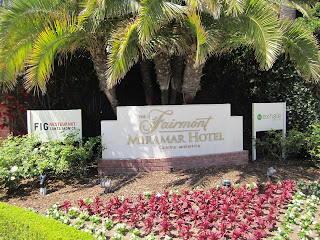 Mark Twain and Susan B. Anthony were some of the first celebrity guests to stay at the Miramar Hotel in Santa Monica. At that time the hotel was a large Victorian mansion, built in 1889, as the residence of Senator John Percival. By the 1920s, the Miramar would become a popular place for Hollywood types. When Louis B. Mayer first brought Greta Garbo to Hollywood, the actress was put up in a suite inside a six story brick hotel building constructed next to the original mansion. In the 1930s, Jean Harlow would dine at the hotel restaurant and Betty Grable would sing in the Miramar lounge.

Over the years the hotel has changed dramatically. Different owners have each made their own additions and renovations to the property. In 1939 the original mansion was demolished and a swimming pool and bungalows were added. In 1959 a modern ten story tower was built on the property and a new pool area was added. The current owners of The Miramar Hotel have plans for another major renovation. 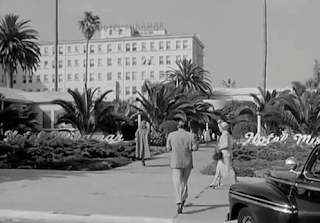 The Miramar Hotel seen in the film, Let's Make it Legal. 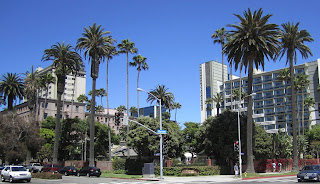 Looking at The Miramar Hotel from Ocean Avenue at Wilshire.

The Miramar Hotel has appeared several times on film. As early as 1946, according to the website Imdb.com, the bungalow apartments are featured in a scene from the Alan Ladd and Veronica Lake film,  The Blue Dahlia. Marilyn Monroe, who at times was a hotel guest, also appeared in a film that used the hotel pool.  In the film, Let's Make It Legal (1951) with Macdonald Carey, Claudette Colbert, Zachary Scott and Robert Wagner, Monroe runs up to Carey while he is dining with his daughter at the hotel pool. In the 1962 film, That Touch of Mink, Cary Grant and Doris Day can be seen in the renovated pool area that was completed in 1959. The Miramar has also appeared on television in such shows as Columbo, Starsky and Hutch, and Knots Landing. 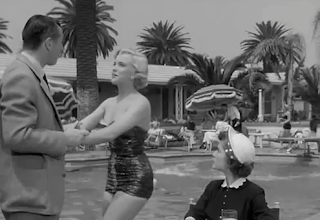 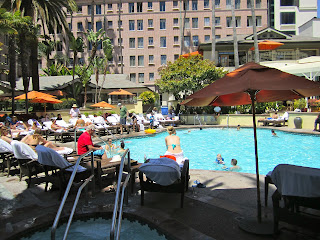 A contemporary view of the Miramar Hotel pool. 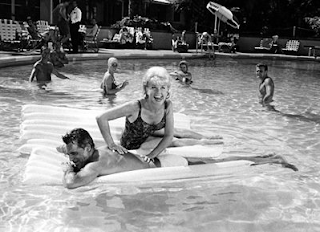 Cary Grant, Doris Day in That Touch of Mink. 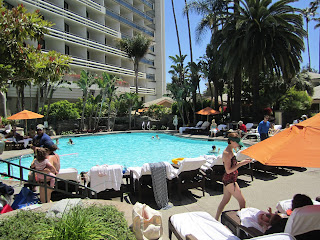 Another contemporary view of the Miramar pool. 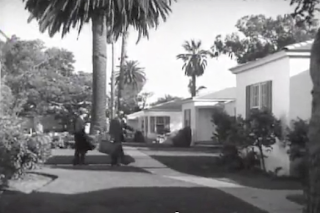 The hotel bungalows as seen in The Blue Dahlia. 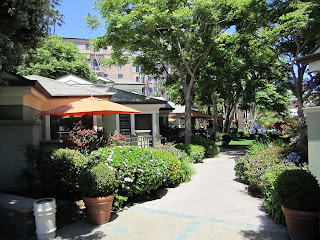 A contemporary view of the hotel bungalows.

If you don't want to spend the night at the hotel but you still want to see the hotel grounds, stop in for breakfast, lunch, dinner or drinks at the hotel restaurant FIG. The name FIG is a reference to a giant fig tree in front of the hotel that was planted by the wife of the original owner, Georgina Sullivan Jones, back in the late 1800s. The food is simple bistro fare, made with what is in season and is served in a seating area that overlooks the hotel pool and bungalows. If you use the hotel valet the restaurant will validate your parking. Afterwards you can walk across the street and stroll along Ocean Avenue and enjoy the view of the Pacific Ocean. I can imagine the athletic Garbo, in her time at the Miramar, running across the street to enjoy a swim in the ocean.

One place and so many memories/connections.

There was a great story in The Hollywood Reporter recently about how the hospital in Hollywood has such a rich history as so many people have come through its doors.

Hi Robby, You've answered a question that I've had for a long time: where the bungalow apartments in "The Blue Dahlia" were filmed. I've been to the Miramar a ton of times and never realized that. Thanks! -- Paul