A Christmas Story (1983) at the Orpheum Theatre, Downtown Los Angeles 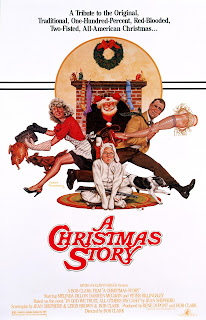 Now that Halloween has passed I'm excited to start planning all of my Christmas time activities. I'm not one of those people that totally bypasses Thanksgiving celebrations, I look forward to the Turkey holiday too, but my December calendar always fills up quickly, so I try to mark my calendar early.  There are always many parties, special theme park events, holiday light shows, Christmas concerts, and many other Christmas attractions. One such event that is coming up is a special screening of the holiday classic, A Christmas Story (1983), at the historic Orpheum Theatre in downtown Los Angeles, hosted by the Los Angeles Conservancy.

The screening, which takes place December 2, will feature the film, a classic cartoon and holiday music performed by Bob Salisbury on the Orpheum's Mighty Wurlitzer organ. If you have not been to a show with a Wurlitzer organ before this will be a treat in and of itself. 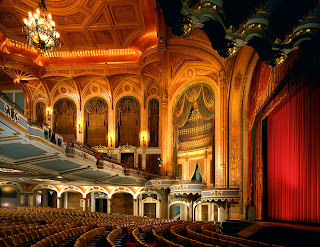 Here are the details on the event from the official press release:

LOS ANGELES (October 23, 2012)—The Los Angeles Conservancy will celebrate the holiday season on Sunday, December 2 with a matinee screening of the recent classic, A Christmas Story (1983), at the historic Orpheum Theatre (1926). While the cult hit runs often on TV during the holidays, there’s no better way to see it than on the big screen in a beautiful movie palace, surrounded by hundreds of fellow fans. A great event for architecture lovers, film fans, and families, the Conservancy’s seventh annual holiday film matinee begins at 2 p.m., allowing time before or after the film to explore the theatre, the Broadway Historic District, and downtown Los Angeles.

The event also includes a few perks, such as Bob Salisbury playing holiday music on the Orpheum’s Mighty Wurlitzer organ, the last remaining theatre organ on Broadway; plus a special treat for diners who present their Conservancy movie ticket at UMAMIcatessen (next door to the theatre at 852 S. Broadway). This special offer is valid only on December 2, 2012.

About the Film
The period film features Peter Billingsley as the frustrated Ralphie, Melinda Dillon as his slightly daffy mother, and Darren McGavin as the “Old Man,” Ralphie’s stern and crusty father. Despite one rough-and-tumble obstacle after another, young Ralphie is fearless in his mission to achieve his Christmas wish.

About the Theatre
Part of the Broadway Historic Theatre District, the Orpheum Theatre (1926) was the fourth and final home of the famed Orpheum vaudeville circuit in Los Angeles. Its Beaux Arts exterior leads to a grand French interior with gold-leaf decoration, silk wall panels, marble pilasters, and enormous chandeliers. The Los Angeles Conservancy is a nonprofit membership organization that works through education and advocacy to recognize, preserve, and revitalize the historic architectural and cultural resources of Los Angeles County. What began as a volunteer group in 1978 now has over 6,500 members, making the Conservancy the largest local organization of its kind in the U.S. 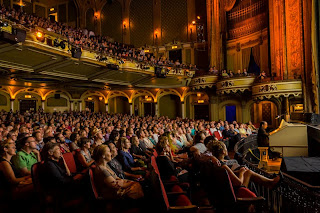 Additionally, I got word that the cartoon that will be shown is the Tweety Bird and Sylvester cartoon Gift Wrapped (Warner Bros. 1952).

What Christmas time events are you looking forward too? Do you have any special holiday traditions?
Posted by Robby Cress at 4:50 PM

This makes me really wish I lived in the LA area! The theatre looks like such a gorgeous location, too! Like you, I love Thanksgiving as much as the next American, but once Halloween is over, I'm just busting at the seems to deck the halls! What better way to do it than with this classic.

Even with widescreen HDTVs today, there's still nothing like seeing a movie, especially classics, on the big silver screen. -- Paul