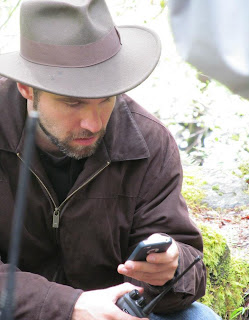 Andy Gunn on set of LOVE IN THE TIME OF MONSTERS.

Talking Old Hollywood is a new series I plan to feature on Dear Old Hollywood where writers, filmmakers, fellow bloggers, artists, historians, or pretty much anyone who is interested in classic movies will have a chance to highlight projects they are working on, share a little of their background and discuss their interest in old Hollywood and classic movies.

First up is Andy Gunn, a producer of a new monster movie filmed in Northern California called LOVE IN THE TIME OF MONSTERS.

Andy, what's LOVE IN THE TIME OF MONSTERS about and who was involved in the film?

LOVE IN THE TIME OF MONSTERS is a horror comedy about two sisters who travel to a cheesy tourist trap where they battle toxic monsters dressed in bigfoot suits in order to save the ones they love. Try saying THAT three times fast! A group of my friends in LA all had done a successful short film called "Background(ed)" around 6 years ago, and we had gone our separate ways; we worked in all sorts of industry jobs. I was a page at Paramount and went to UCLA producer's program, along with producing some other projects. The director Matt Jackson became a successful story editor on Reality TV, etc. Mike the writer had been working on this great script with us since 2008! Towards the end of 2010 I finally said we have to do this thing or it's not going to happen. So here we are, 2-5 years later, with a movie I'm really proud of.

Can you tell us about the location for this film? Where did you shoot the movie?

We shot the film at the historic Patrick Creek Lodge in Gasquet, California. Surrounded by redwoods, the lodge has been there for over 100 years! Mike (the writer) found it while driving through California, looking for inspiration - and boy did he find it! In fact, the Patrick Creek Lodge was so perfect it seemed like it had sprung out of his mind. Shooting there was great; not only could we house the cast and crew, but the production value was immense. It was a little like summer camp up there, and everybody bonded while we shot, we really became like a family. The locals in Gasquet and Crescent City were very helpful as well, and we couldn't have done it without them. 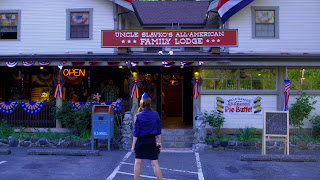 The tourist trap soon to be invaded by zombie Bigfoots.

Most challenging was always having so little money to do the things you had to do to make the movie the way you want. But it's really true what they say about being more creative under those circumstances. The whole process was so much fun! Seeing it all come together piece by piece was amazing and truly the best part of a producer's job. Never underestimate the power of "mind over matter"; just getting good people to truly commit to something, they will find a way to get it done.

What's next for LOVE IN THE TIME OF MONSTERS?

We released a teaser trailer on YouTube, and it got a lot of attention, which is great. Waiting to hear back from a couple festivals, but in the meantime we're shopping it around and looking for the right distributor to sell it to. Here's a media round up: http://uncleslavkosfuntimeblog.com/2013/05/03/media-round-up/ 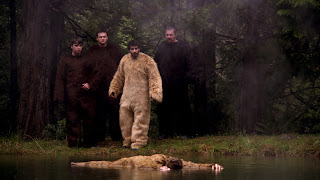 As someone now making films, what films have inspired you and do you have a favorite classic movie?

My all time favorite and most influential film was BRAVEHEART, which I saw in the theater at 14, and really effected me on every level. I just love epic filmmaking, so BEN HUR is a big favorite as well. I also love ONCE UPON A TIME IN THE WEST, which somehow keeps you totally engaged for 3 hours with a minimal amount of dialogue. The great characters, music, direction are all first rate. Claudia Cardinale doesn't hurt either. My favorite Hitchcock movie is probably NORTH BY NORTHWEST.

How did you get into classic movies? Did someone turn you on to classics or did you seek them out on your own?

My parents were big time movie fans, so they showed me all kinds of films growing up. I started to seek them out as I got older as well. I always try to see classic movies that keep coming up in conversations so I know what everybody is talking about.

Who is your favorite classic film star and/or actress and is there a particular reason why?

Probably Charles Bronson. He just seems like an unlikely movie star, which I love. Did so much with so few lines - you just believed him. So good.

Is there a classic film you enjoy that you wish more people would see?

The Sand Pebbles with Steve McQueen. It's a great epic film that has everything you could want in a movie. Great historical fiction as well, which is one of my favorite genres. That movie sticks with you after you see it.

One final question. As someone living and working in Hollywood, do you have a favorite "old Hollywood" haunt (such as a restaurant, nightclub, theatre) or old Hollywood experience?

I'm a lucky guy and got to work at Koontz Hardware in West Hollywood/Beverly Hills. Saw lots of movie stars through the years. My two favorites were probably Barbara Streisand and Burt Reynolds. When Burt walked in, I was thinking "this guy must get mistaken for Burt Reynolds all the time" until I realized it was him!

Teaser trailer for LOVE IN THE TIME OF MONSTERS

Thanks Andy for your time.

LOVE IN THE TIME OF MONSTERS stars Doug Jones (Pan's Labyrinth, Hell Boy), Kane Hodder ("only actor to play three of the most famous horror icons:" Jason Voorhees, Freddy Krueger's gloved hand, and Leatherface), Michael McShane (Whose Line Is It Anyway, Robin Hood: Prince of Thieves), Gena Shaw (Not Another Teen Movie), and Marissa Skell (Slumber Party Slaughter). To learn more about the film LOVE IN THE TIME OF MONSTERS here are a few links:
Posted by Robby Cress at 9:19 AM

Great idea!! I look forward to this. Also-- Are you/Dear Old Hollywood on twitter?

Thanks. I hope it will be a fun series. Regarding Twitter, I just finally made the jump to Twitter. I had been holding out for some time, but I'm finally on the bandwagon. I'm Dear Old Hollywood @oldHollywoodrob. Give me some time as I figure things out.