Life at the Marmont: The Inside Story of Hollywood's Legendary Hotel of the Stars 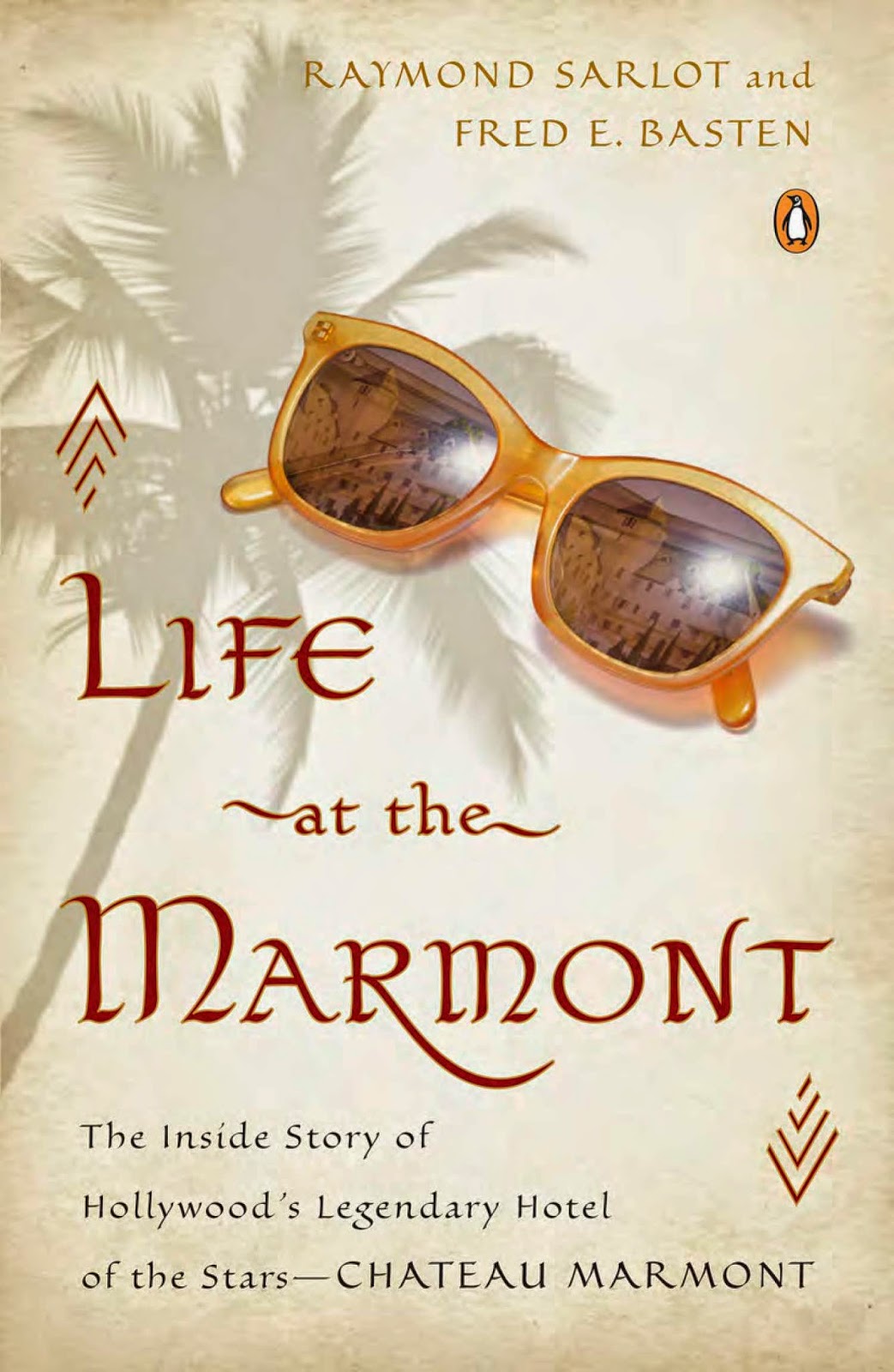 I first visited the Chateau Marmont, a Gothic European inspired hotel located on the Sunset Strip in West Hollywood, about eight years ago. A friend of mine was celebrating a birthday and her boss had rented one of the large suites on the upper floor. I had heard some of the stories about the Marmont - how Marilyn Monroe stayed at the hotel or rock stars like Led Zeppelin crashed at the place - so I was excited to experience the hotel for myself. As soon as I entered the hotel I got the feeling I was walking into a mythical place. I remember the hallways being dark and narrow, little European architectural details, seeing some high profile guests hanging out in the lobby and when I got to to the top of the hotel - the amazing view of Los Angeles that looked out from our suite. I could see for myself why so many of Hollywood's biggest stars have chosen to make the Marmont their home. 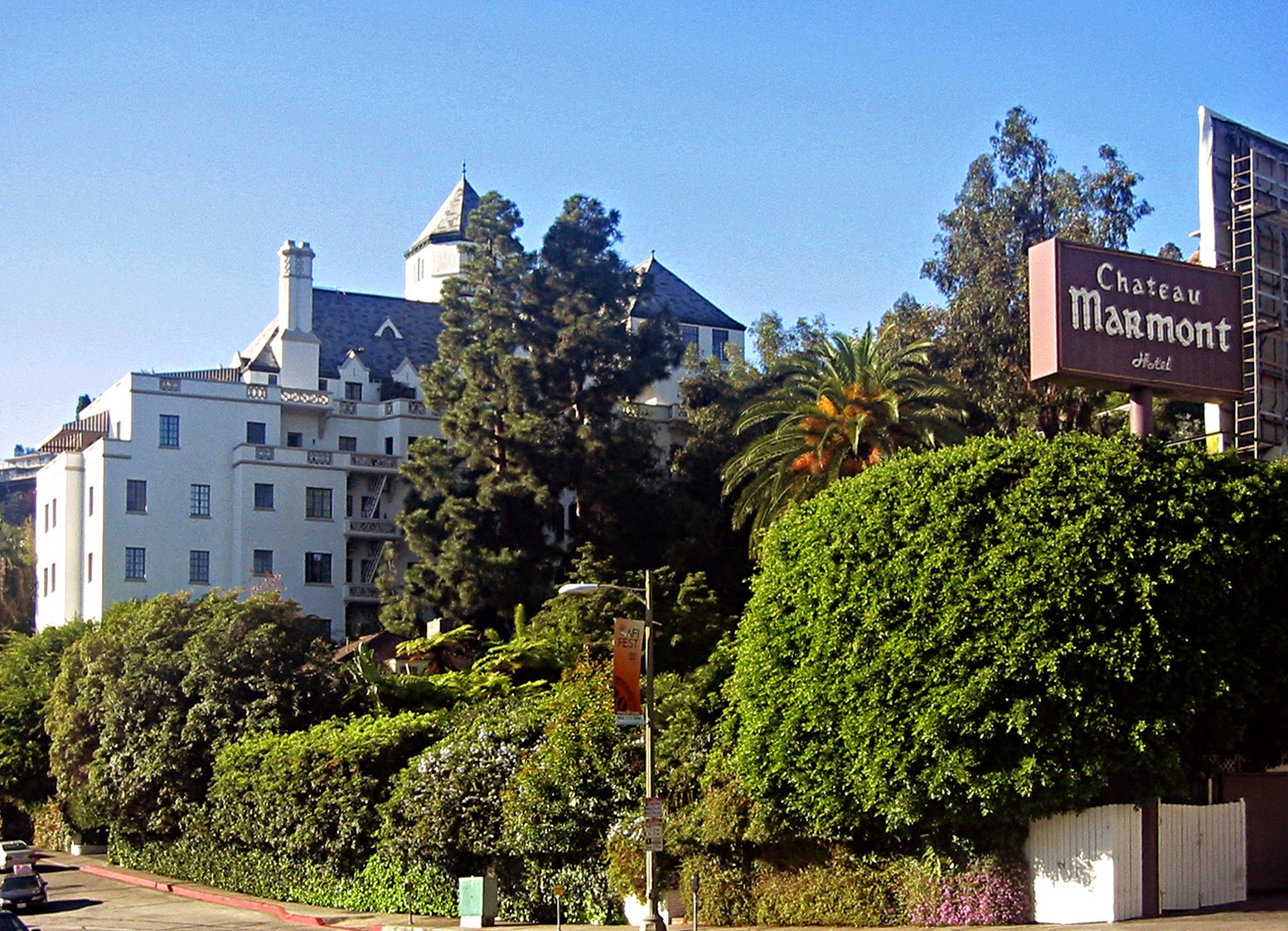 The Chateau Marmont on the Sunset Strip.

I've always wanted to learn more about this hotel, so as part of my Summer Reading Classic Film Book Challenge hosted by Out of the Past - A Classic Movie Blog, I chose to read Life at the Marmont: The Inside Store of Hollywood's Legendary Hotel of the Stars - Chateau Marmont, by Raymond Sarlot and Fred E. Basten. The book is an interesting in-depth look at the hotel's history and filled with stories of the many celebrities that stayed there over the years. The book goes in chronological order, so it begins with some background on how the hotel was founded in the 1920s, in what was at the time a little strip in the middle of nowhere, halfway between Hollywood and Beverly Hills. We then learn about the different guests who have visited and how things changed at the hotel over the passing decades. 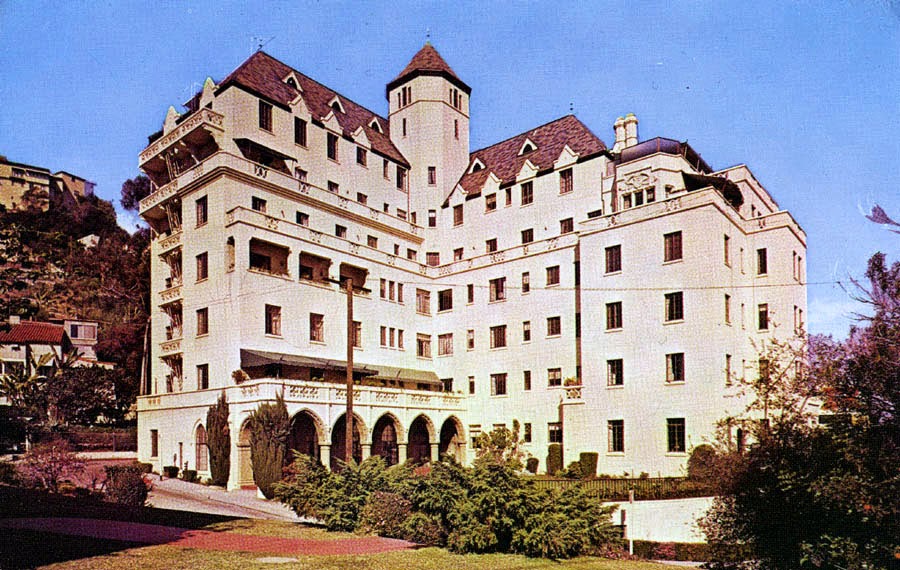 When Harry Cohn got a young 21 year old William Holden and a 22 year old Glenn Ford to work at his Columbia studio under contract, he didn't want his business investments getting into trouble, at least not where anyone would find out, so he rented them a room at the Marmont. In the book Ford recounts his time at the Marmont:

"Harry really worried about Bill and me. He had put us under contract at approximately the same time, and we were constantly getting into trouble - going places where we shouldn't have gone and mixing with the wrong people. In his eyes, rather bad company. One day he sent for us and said, 'If you must get into trouble, go to the Marmont.' He made it clear that he had rented the small penthouse there just for us, to protect us. As upset and concerned as he was, he never raised his voice. But he made sure we got his point."

Throughout 1939 Ford and Holden shared the suite with actor David Niven. I like to think that maybe during my stay at the Marmont that I was in the same suite - regardless - I know many old Hollywood stars have. 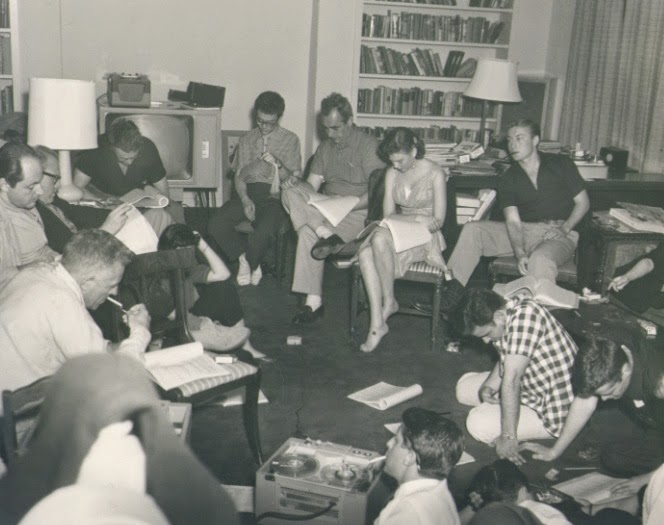 Nicholas Ray, James Dean, Natalie Wood, Jim Backus and the Rebel Without a Cause cast.

Following his divorce from actress Gloria Grahame, director Nicholas Ray moved into the Chateau Marmont and lived here for a few years off and on. Ray stayed in one of the private bungalows next to the main building. He worked on many of his films from here, including his most famous film, Rebel Without a Cause. During Rebel, Ray held the early script sessions at his bungalow, inviting the cast over for readings, including James Dean, Natalie Wood, Jim Backus, and Dennis Hopper.

Ray was known to be a partier and his Sunday soirees were quite popular at the hotel. He was also a bit of a ladies man, and one of the people seduced by Ray was his young actress, Natalie Wood. Wood became infatuated with Ray, even though he was old enough to be her dad. Wood would always be the first to show up to Ray's bungalow and the last to leave. No one suspected anything at first, but one night, Dennis Hopper, who had dated Wood prior to Rebel, showed up to the bungalow without knocking. Not finding anyone on the first floor he wandered up to the second floor where he spotted the seventeen year old Wood in bed with Ray. Hopper was outraged and made things difficult during the remainder of filming Rebel. 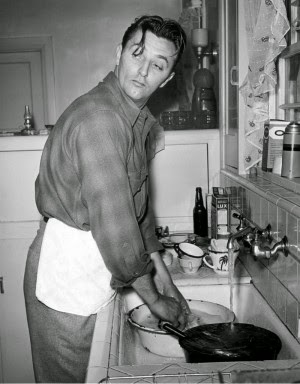 Robert Mitchum washes dishes at the Marmont in 1949.

Life at the Marmont is filled with fascinating stories about some of Hollywood's biggest stars and also music stars. I recommend the book for seasoned classic movie fans who would be familiar with all the old stars mentioned in the book or for Los Angeles history buffs.

Visit Out of the Past - A Classic Movie Blog for more summer book challenge reviews.
Posted by Robby Cress at 7:57 PM

Thanks for this piece Robby, it brings back such terrific memories.

I first discovered the Marmont right after I moved here in '86 (a few months before the original printing of this book). It was in that sticky period after it's glory days, but before its rebirth as a hipster destination. It was all a bit shabby but nonetheless compelling. One could feel the history and the stories and the ghosts of the place.

I spent many an afternoon and evening in the place. There was no kitchen per se, but you could tell the front desk person that you wanted coffee in the lobby and that much could be accomplished. Sitting deep in the overstuffed furniture in that lobby next to that piano (which the hands of every great had played) with a friend was relaxing and quiet. And in about 20 minutes or so, a bellboy would bring out a large tray and place it on the coffee table. It contained full coffee service for two (in one of those old, heavy hotel silver pots, and a dish of shortbread cookies. All this for $6! The next couple of hours would be spent drinking coffee, chatting and watching the comings and goings of celebrities, tourists, drug dealers and literary types.

Bring back the good old days.

Marvelous article! Makes me want to both read the book and visit. I love your blog so much. You are doing the groundwork for those of us who share your interest but aren't local! Thanks so much!

Thanks for sharing your memories! Not covered in the book, but from what I remember reading in an interview with actor Mark Ruffalo, that he used to work at the Marmont - can't remember if it was the late 80s or early 90s, but he remembers a young Johnny Depp and Nic Cage coming in regularly at the time. They were just a few years older than he was but their careers were taking off while he was struggling to get by. I can imagine you sitting in the lobby while this future star was having to serve the up-and-coming stars of the day :)

Thanks for the kind comment. I think you will enjoy the book. It makes for some great summer reading.

Great piece, Robby. The CM is a fascinating place.

This sounds like a really interesting book. I love reading about places, especially ones that have historic or cultural significance and this one definitely has both. While your review definitely got me interested, I think it was the photo of Robert Mitchum that sold me on it!

Hate to be a downer but i didn't see anything mentioned about probably the Chateau's most famous guest: John Belushi. His unfortunate passing really put the hotel in the spotlight (for all the wrong reasons).