Cinespia cemetery screenings are back! 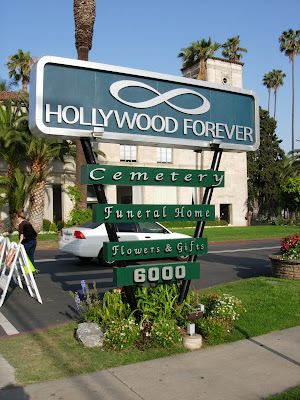 Hollywood Forever Cemetery, 6000 Santa Monica Blvd.
It's May and that means that the Cinespia cemetery screenings are back! Being a classic movie fan, this is hands down my favorite summertime activity in Los Angeles. Starting in 2002 movie buffs have been taking over the Hollywood Forever Cemetery to screen classic and cult films on the white marble wall of Rudolph Valentino's mausoleum wall. Films range from classics like The Thin Man and Rebel Without a Cause to cult films like Pee Wee's Big Adventure and Fast Times at Ridgemont High.
Below are some pictures from last year. 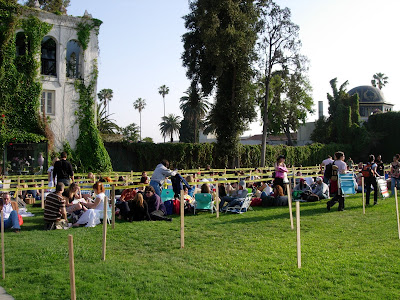 People begin lining up outside Hollywood Forever Cemetery, located at 6000 Santa Monica Blvd, early in the evening. The films don't start until 9pm when it is completely dark out but the gates open at 7:30pm. The cost of admission is $10. 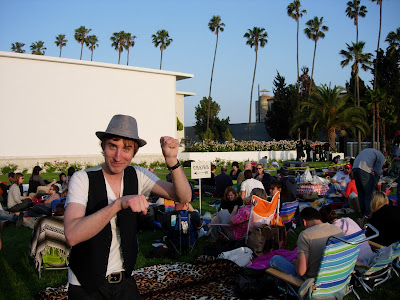 Me in front of Rudy Valentino's Mausoleum, the "Screen"
Once the gates open visitors can find a place in front of Rudolph Valentino's mausoleum wall which is where the film will be screened. You are welcome to bring most anything you want into the cemetery. I usually bring a picnic blanket, something warm to wear at night, some snacks and wine. Then you have the pros who some how manage to bring in small coffee tables, full dinners, candles and the whole works. While you wait for the sun to go down their are DJs spinning music for your listening entertainment. 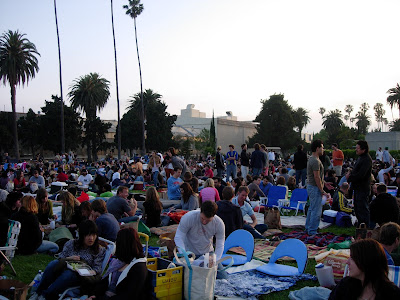 A view of the crowd getting ready for the screening.
The crowd varies in size depending on the film but there is always a large turnout. Above is a photo of the crowd finding their seats. That's the backlot of Paramount Studios bordering the cemetery. Not only are you watching a movie on a silent film star's mausoleum, but you are seated in a cemetery surrounded by old Hollywood stars including Douglas Fairbanks, Cecil B. Demille, and Norma Talmadge which is next to the oldest remaining Hollywood studio.

I don't believe they have officially announced the first screening of the season but rumor has it that it will be the Paul Newman classic Cool Hand Luke. Here's the nitty gritty:
Where: Hollywood Forever Cemetery, 6000 Santa Monica Blvd, Los Angeles
When: May 16, 2009
What: Cool Hand Luke
Cost: $10
For more details check out the official Cinespia website.

eeeeeeeee! i can't wait- how i loveth thee red wine and cheeeeeeese... oh yeah-- and the films, ehehehe. :)

!@%$@#
This is another reason why I need to go to California like, now.

Now in all fairness hes in that masoleum but hes nowhere near that wall! In fact it'd have to be on the other side of the building to be by Rudy!

That being said I had the joy of seeing "Golddiggers of 33" and "Carrie" next to Doug. Randomest sentence ever.

I hope they screen some silents this year...I heard they havent for at least 2 or 3 years now :(.

film screenings in a cemetery? maybe cemetery means something different in the USA to over here, haha.

I'm so jealous! In my hometown, they screen classic films in the courtyard of the performing arts center. definitely not as cool as being in a cemetary full of celebrities.

This is one of the things I missed whilst visiting Lala Land... next time...