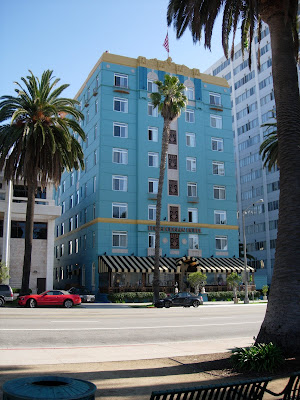 The Georgian Hotel, Santa Monica, CA
In the early 1930s, if you were looking to get away, maybe be a bit naughty, or simply hideout, you might have stayed at The Georgian Hotel located at 1415 Ocean Avenue in Santa Monica, California. While Clark Gable was married to the much older (17 years older) Texas socialite, Ria Franklin Prentiss Lucas Langham, he would sometimes meet up with actress Carole Lombard at The Georgian Hotel. Fatty Arbuckle, Charlie Chaplin, and many others from old Hollywood's elite have stayed here. Even big time gangsters like Bugsy Siegel and Al Capone would come to the Georgian to lay low. 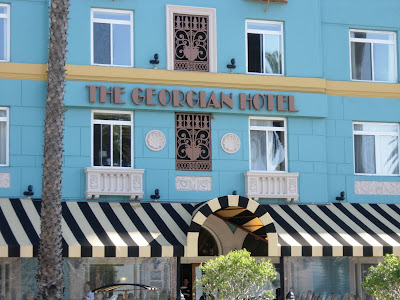 The Georgian Hotel, Santa Monica, Ca
When this modern art deco hotel was built, Santa Monica was a wooded, quiet beachside community. The hotel was not far from Hollywood and Los Angeles, but far enough to be private. During Prohibition, the hotel utilized the private setting by running a speakeasy. You can imagine all the big time Hollywood actors, writers, directors and executives with a taste for alcohol, coming out to this exclusive spot to kick back some martinis. After prohibition the speakeasy turned into a legitimate watering hole known as the Red Griffin Room, which is apparently haunted. If you got any stories, please share!
Santa Monica is now completely built up and no longer has the same private setting, but the beautiful Georgian Hotel still attracts Hollywood's elite. Robert Downey Jr, Al Pacino, Nic Cage, among others, have been known to visit the Georgian Hotel. It is also sometimes used as a film location (Get Shorty, The Opposite of Sex) and a place to conduct celebrity interviews.
I have yet to spend a night in The Georgian Hotel - it's a bit out of my price range for a casual stay - but if you have visited the hotel, please feel free to share your experience.
Your thoughts?
Posted by Robby Cress at 1:19 PM

hi-
I came across your blog while trying to find out about a vintage novelty tablecloth I recently rediscovered while doing some spring cleaning.

The tablecloth design is a variety of Hollywood restaurant and bar logos from the 40's-50's. Not very many of them are familiar to me except for The Brown Derby and a few others (The Knickerbocker, Sardi's). The It Cafe (on one of your past blog entries) is on it - there are about 20 in all.

I'm guessing it was a souvenir (I bought it at an estate sale a couple of years ago – I'm in Portland Oregon). It appears to be from the era and was never used - it's white with red printing. The graphics are wonderful. Have you ever come across something like this?

I'm planning to sell it on ebay and I'm just curious if it was a popular item or rare. If you'd like to see photos just let me know. Love your blog's focus!

What a gorgeous hotel!

That table cloth sounds like a fantastic find! I recommend checking out the website www.latimemachines.com. The site has a long listing of extinct LA restaurants, which I'm sure you will find quite a few from your tablecloth.

As for how rare the tablecloth is -I'm not sure. I've never seen one, but I'm guessing it was a Hollywood souvenir. The restaurants you all named had locations in Hollywood around the 40s and 50s as you mentioned.

If you find any more about the tablecloth let us know. Sounds like a fun item to bring on Antique Roadshow!

Robby - This place is on my list as well; hopefully one day I will get to stay there!

I have heard so much about this! How interesting! You might like my posts on some haunted places in California also! Hope you have a great week doll. Kori xoxo

I live near that hotel, but I've never stopped by. Will have to check it out, especially now that I know it's haunted!
Best,
Marty

Robby,
My husband and I stay there, whenever we can get out to California. It is such a beautiful old hotel, with a lot of history! We love the veranda overlooking the ocean. What a wonderful place. We plan to be there next June to celebrate our anniversary!
Robin

An early congratulations to you and your husband on your upcoming anniversary! The Georgian Hotel would be a great place to spend an anniversary - especially on a warm summer June day.

My wife and I have stayed at the Georgian many times, and we will be there again next week! We've never seen a ghost, but supposedly only the basement is haunted. It was the location of the speakeasy. Anyway, I highly recommend you at least visit the veranda and have a drink some afternoon.

Yes, The Georgian is a beautiful hotel. I worked there during the early 90's as the assistant to the General Manager. It was built by Rosamond Borde, and there was a sister hotel (they matched) right next door where the high rise apartments are now. Rosamond's son went on to become a judge in Santa Monica. The speakeasy (below the lobby) IS haunted and very beautiful. The old kitchen down there is really cool too. I used to have to do room inspections now and again, and it was eerie being on the upper floors alone. We did some great parties for the SM Historical society. I have a very special place in my heart for the old girl. Thank goodness people are still enjoying that wonderful hotel - keeping it alive and well.