An Evening With Cass Warner 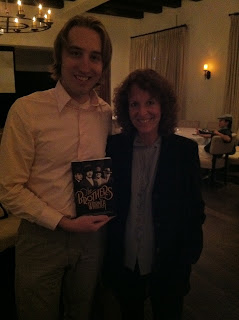 Robby and Cass Warner Sperling
Last week I had the privilege to attend "An Evening with Cass Warner Sperling" at Ramsey's At The Club in Burbank, California, where Cass discussed her book, "The Brothers Warner" and her documentary film of the same name. Both the book and the film tell the extraordinary story of the Warner Brothers, the men who went on to create the iconic company that bears their name. I have yet to finish reading the book, but I have seen the film, and what I enjoyed most about the documentary is that it focuses more on the men, rather than on the corporation that the men started. The business is just one of the characters in the story.
Now, Cass is the granddaughter of Harry Warner, so she brings an insiders perspective to the history of the Warner Brothers. At the event, one of the most touching stories Cass had to share was about the last time she saw her grandpa Harry. When Cass was ten years old she went to visit her ill grandpa Harry at a Bel Air mansion where a nurse was taking care of him. The nurse lead Cass into the room where Harry was resting. Harry did not vocally respond when he learned that his granddaughter was in the room - he couldn't speak - but his eyes found Cass and they concentrated on her. Harry reached across the bed and grabbed his granddaughter's hand. Cass says that between the look in his eyes and the way Harry squeezed her hand, it was as if he was passing a message.
Years later, Cass would interpret the message to mean that Harry wanted her to carry on and share Harry's ideals. Harry's and the Warner Brothers's motto was "to educate, entertain, and enlighten" and Cass is certainly following that motto with the projects she is involved with.
To learn more about "The Brothers Warner" book, film, and other projects that Cass Warner is involved with check out these links:
www.thebrotherswarner.com and www.warnersisters.com

Your thoughts?
Posted by Robby Cress at 8:56 PM

Wow ... I never knew that the old Warner Bros. motto was to "educate, entertain and enlighten." Some of the modern media companies have similar 'mottos' today ... though the businesses themselves are more diverse. I doubt Harry would have liked the fact that most of the major studios were swallowed-up by media conglomerates.
Best,
Marty

I lived with Jack and Ann Warner as a an ongoing house guest at 1801 Angelo Drive during their declining years until Anushka(as her close friends were bid to call her) passed away in the late 80's. Many a night, especially after Jack was bed ridden, and she became a notorious insomniac, she would relate many of her stories of Hollywood, and the rest of the Warner clan, albeit from her point of view. She WAS a very private person, and quite aloof, especially of Jack's "bum friends"
After Jack passed away, she became a recluse, and, sadly, a prisoner to the house that she so adored.

She was my mother figure, my mentor, my sister... I miss her terribly.

OH, the stories I could tell you!