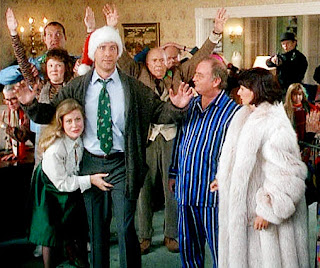 Christmas with the Griswolds
Now that Thanksgiving has passed I'm in full Christmas mode. The tree is up, wifey has been putting up decorations, we've both started the shopping madness and now we're ready for a marathon of Christmas movies. Well, my wife will watch a movie now and then and I'll be the couch potato that will watch one right after the next. Thank goodness for laptops and smartphones - I rarely need to get up from the TV.
Every year I like to mix in some of my favorite Christmas films with others I've never seen before. By far my favorite annual film is National Lampoon's Christmas Vacation (1989). No matter how many times I see this film I always find myself laughing out loud. My brothers and I can practically quote the whole film. 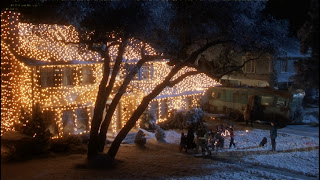 The Griswold Home
"Where do you think you're going? Nobody's leaving. Nobody's walking out on this fun, old-fashioned family Christmas. No, no. We're all in this together. This is a full-blown, four-alarm holiday emergency here. We're gonna press on, and we're gonna have the hap, hap, happiest Christmas since Bing Crosby tap-danced with Danny fucking Kaye. And when Santa squeezes his fat white ass down that chimney tonight, he's gonna find the jolliest bunch of assholes this side of the nuthouse."
That's Clark Griswold (Chevy Chase) ranting after so many things go wrong with the perfect Christmas he had planned.
I've already got Holiday Affair (1949) with Robert Mitchum and Janet Leigh in this season. Next up on the viewing list is the original Miracle on 34th Street (1947) with Maureen O'Hara, John Payne, Natalie Wood and Edmund Gwenn.
What are your favorite Christmas season films to watch? I'm always on the look out for some lesser known holiday films. This year I'm going to watch All Mine to Give (1957) which I've only heard of a couple years ago and have not seen yet.
Posted by Robby Cress at 8:49 AM

The Shop Around The Corner has become one of my must-sees during the Christmas season. Not to mention, that other Jimmy Stewart favorite. The recent Robert DeNiro film, Everybody's Fine, got universally panned, but I think it's a splendid film with great performances. I'll be sure to watch that as well.

I know it's not old but Elf is by far one of my favorite Christmas movies. I think it has a sweetness to it that makes me happy every year. I also love watching Love Actually. The story and acting is amazing. I highly recommend it if you haven't already seen it.

I'LL BE SEEING YOU with Ginger Rogers and Joseph Cotten is a great non-traditional Christmas movie. Highly recommended. Also REMEMBER THE NIGHT with MacMurray and Stanwyck.

It's less Christmasy, but SUSAN SLEPT HERE is partly set at Christmastime and has amazing eye-popping Technicolor. LADY ON A TRAIN with Deanna Durbin combines Christmas, film noir, and comedy. I love it.

A more recent Christmastime film I enjoy: THE HOLIDAY with Kate Winslet and Cameron Diaz.

The better-known classic Christmas titles which are my favorites: THE BISHOP'S WIFE and WHITE CHRISTMAS.

And for New Year's Eve, BACHELOR MOTHER with Ginger Rogers and David Niven.

Totally agree. THE SHOP AROUND THE CORNER is a great choice as well as that "other Jimmy Stewart favorite." ;)

ELF is actually the first movie with Will Ferrell that I actually liked. The story is simple and sweet. Definitely one of the better recent Christmas films. I haven't seen LOVE ACTUALLY but I've heard good things. Thanks for sharing.

Thanks for all the great suggestions! I'LL BE SEEING YOU, SUSAN SLEPT HERE, and BACHELOR MOTHER will all be new to me. REMEMBER THE NIGHT is a new to me favorite. I only just saw that when the TCM DVD release came out not that long ago.

It does seem that as soon as the leftovers from Thanksgiving are safely in my tummy it’s time to get into Christmas mode full time. You are like me on the couch getting as many Christmas movies in as possible especially because it’s once a year and watching them any other time of year would feel silly. I also like to mix in traditional favorites with something new just to mix things up a bit. “Last Holiday” is really good and it hits home for me so I really like it. Last year my Dad who is awesome got me a flat screen HDTV I guess he agreed with my colleague who also works for Dish Network that I was a little behind on my technology. Like any qualified customer, I was able to get all my HD programming free for life and Happy New Year qualified for a free upgrade to HD equipment. HD makes such a difference in quality and color that my tree will have to be brighter to keep up. My traditional favorite is “A Christmas Carol” it doesn’t matter now many versions of this film they make I will watch all of them. Bring on “A Christmas Story” so I can roll around on the floor laughing like a kid. Or, simply give me “Miracle on 34th Street” (1947) and I’ll cuddle up on the couch and get absorbed in the glory of the Holiday.

It's a wonderful life is my favorite film it is holiday time but not so much a Christmas movie.But my favorite Christmas movie also not about Christmas but does have Santa in it is the original 1938 "Babes in Toyland"-Laurel and Hardy.
"I don't want to stay with Barnaby ,I don't love him!" :)

WHITE CHRISTMAS! This may sound sacrilegious, but I have never gotten into It's a Wonderful Life.