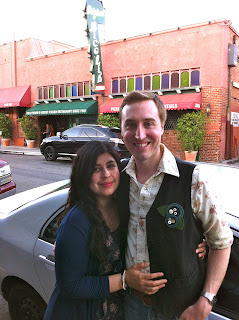 The great thing about Los Angeles is that there is always something new to see or do. Even if that something new is actually really old. I don't know how many times I've passed Miceli's, the oldest Italian restaurant in Hollywood, without ever stopping in. I would always think to myself, "next time,"  but next time never came - until this past Mother's Day weekend.

My wife's favorite food is Italian and I wanted to take her to an Italian restaurant we had never tried before. This seemed like the perfect time to try Miceli's. And once I learned that Miceli's had a Lucille Ball connection (my wife's favorite actress) I knew this place was a winner. Besides, being the oldest Italian restaurant in Hollywood, an area where restaurants change every few months, I figured Miceli's must be doing something right? 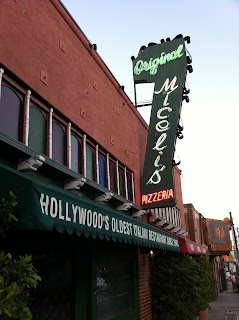 Miceli's opened in 1949 when Carmen and Silvia Miceli, with the help of their brothers and sisters, put their funds together to start a restaurant. Carmen, a Chicago native, came to Los Angeles shortly after fighting in World War II. When he started his Hollywood restaurant using family recipes brought from Sicily by way of Chicago, he opened what would be Hollywood's first pizzeria. Being in Hollywood, Miceli's attracted the stars and regular folks alike.

According to Joe Miceli, Carmen's son and one of the current co-owners, it was at Miceli's that Lucille Ball learned to toss a pizza for an episode of I Love Lucy. Watch a clip of that episode here. Other classic celebrities who have come to Miceli's throughout the years include Frank Sinatra, Dean Martin, Sal Mineo, the Lloyd Bridges family, The Beatles, Elizabeth Taylor, Richard Burton, John F. Kennedy, Marilyn Monroe, Joe DiMaggio and probably every classic Hollywood star with a taste for Italian. 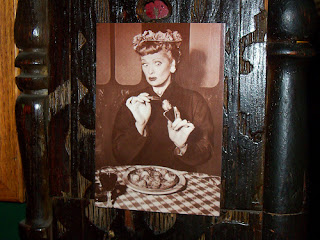 This photo from Glass of Win.

The place feels like a step back in time and what you would expect from an old Hollywood restaurant. In fact, an interesting bit of trivia, the wooden booths inside of Miceli's come from another old Hollywood restaurant, the famous Pig 'n Whistle restaurant located next door to the Egyptian Theatre. When the Pig 'n Whistle closed in 1949 (the restaurant sat unoccupied for 50 years before reopening) Miceli's bought up all the booths. Many of those booths can still be found inside Miceli's and my wife and I happened to be seated in one. In the picture below you can see carved into the booth is an image of a pig with a whistle. 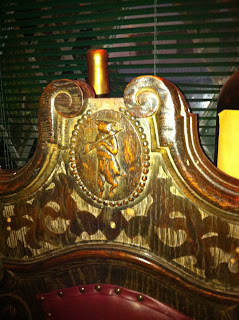 Of course, we also happened to be seated under a Chianti bottle signed by someone from Green Bay, Wisconsin. This was fitting because I always tease my wife that everything can be tied back to Wisconsin, a kind of "six degrees of Wisco." Whether it be the long list of actors including Spencer Tracy, Fred MacMurray, Nancy Olson, Fredric March, or directors Orson Welles, Nicholas Ray, Howard Hawks or Eddie Cline, or studio moguls like Carl Laemmle Sr. There are just too many connections to name but I will stop before I annoy you as much as my wife. 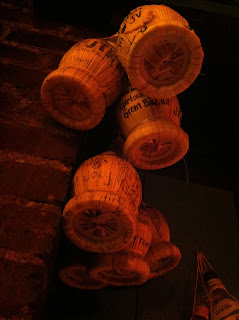 Chianti bottles hang from the ceiling. 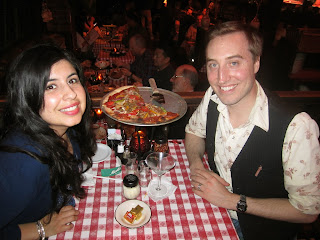 Inside Miceli's in Hollywood.

Above is a photo we had taken inside of Miceli's. I had already devoured our appetizer, a round of drinks and started in on our pizza before I figured we better get a snapshot.

Joe Miceli discusses the history of the Miceli's restaurant.


One last old Hollywood connection. In one of my favorite noirs, Gun Crazy (1950), There is a scene where the two lead characters Annie and Bart pull their car over near a newsstand on Las Palmas. Although we don't really get a good view of the Miceli's restaurant, the spot where the two pull over is directly across the street from the Hollywood Miceli's. You can see this location in my full post on the Gun Crazy filming locations here.


Have you ever visited Miceli's? What's your favorite dish? We figured for our first time we better try the pizza. It tasted great and all the toppings were nice and fresh.
Posted by Robby Cress at 10:57 PM

Haven't been to Miceli's in ages. In fact, I wasn't even sure it was still there. But I used to go there on dates. Always had a good time. Your piece really takes me back. As Bob Hope might say, thanks for the memories. -- Paul Marks

It really is a charming place. I'm glad it's survived amongst all the changes in Hollywood. I'll definitely be back.

I once auditioned to be a singing waitress at their Studio City location. I like to think my lack of restaurant experience is why I did not get the job, because my rendition of "Lydia the Tattooed Lady" was fabulous!

Can't get enough of their rolls.

This looks like a fabulous place! If we're ever back in Hollywood, I'm dragging my husband here.

I Love Lucy is my all time favorite tv series and am delighted to hear of this connection.

If the restaurant opened in 1949, how then could Bugsy Seagel have visited it?

Good point craigmo36! That reference came straight from the Miceli's website. You're right though, the restaurant wouldn't have even been open until 2 years after Bugsy's death.

Micelli's is one of those fabulous places I just must visit whenever I'm in LA; a fan of LA (and Hollywood) history, it's a choice between Micelli's, Musso and Frank or Clifton's - and, if the first two, then afterwards a cocktail or two at Boardner's. As for the Bugsy Siegel mis-step, it recalls that saying about "never let the truth get in the way of a good story". I often stay at the Travelodge Hotel at LAX which has quite a rich history of its own. It opened in 1953 and a brief history of the hotel available in each room will tell you that Howard Hughes and Jane Russell stayed there during the filming of The Outlaw. Except The Outlaw filmed in 1941. Oh well, close but no cigar.