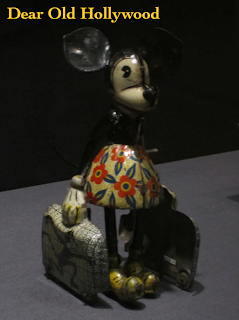 Like many people I grew up watching everything Disney. I'm part of a generation that grew up with the Disney Channel on cable. I visited the theme parks growing up. I even worked in the Disney theme parks throughout college. I would read every Disney related book to come out. You can say that I have a bit of a fascination with Disney, but not just the company, but also the man himself.

Maybe it's because I had a grandpa named Walt who had a striking resemblance to Walt Disney, that maybe sparked something in me as a kid, but for some reason I developed a strong interest in Walt. That's why one of the primary stops on my family's Northern California trip was a visit to The Walt Disney Family Museum in San Francisco (to see more of our NoCal stops click here). The great thing about this museum is the focus is on the man and not the corporation that he started. The museum reminds us that this was a guy who drove to a job, had a family, lived a life and wasn't just some corporate icon. Walt's story is told in a colorful, interactive and entertaining way. All qualities you would expect from something with the name Disney.

Here are a few snapshots from our visit. Note: click images to see larger. 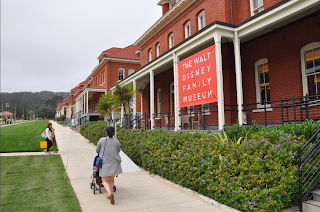 Zinnia and Hazel walk to the entrance of the museum.

The Walt Disney Family Museum is located at 104 Montgomery Street in the Presidio of San Francisco. This large park and former military base contains many different buildings across the property, of which the Disney museum is located inside one of these large buildings. 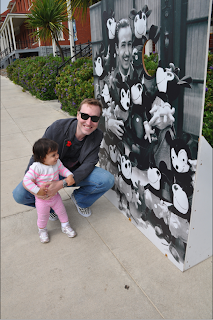 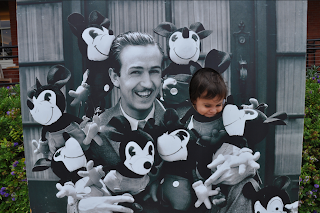 Hazel trying to blend in with the Mickeys.

Outside the entrance to the museum was a photo op with Walt and a bunch of Mickeys. 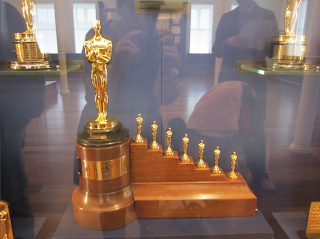 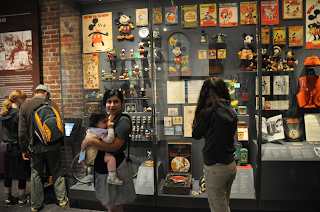 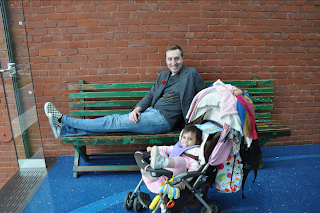 Robby and Hazel on a Griffith Park bench.

The green bench in the above photo is one that would have been located in Griffith Park during Walt's time. Walt was known to take his daughters to Griffith Park to ride the merry-go-round. The story goes that Walt would sit on one of these benches while he watched his kids play and it was during this time he came up with the idea for a place where kids and their parents could play together.

One of the fun things about the museum is the further you go the more dynamic the exhibits get, drawing you further in. 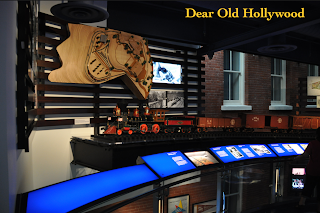 In 1950, Walt laid railroad tracks throughout the back yard of his Holmby Hills home. Walt had built a working 1/8-scale, coal-fueled steam train, with cars and caboose, that he would take the kids and friends on rides around the backyard. The engine, named the Lilly Belle after Walt's wife Lillian, is on display at the museum. 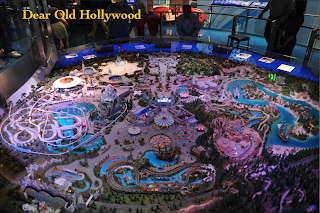 An impressive model of Disneyland. 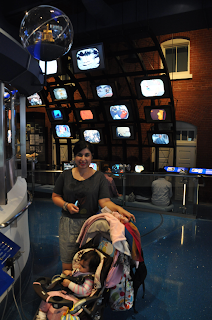 Zinnia and Hazel listening about one of the exhibits. 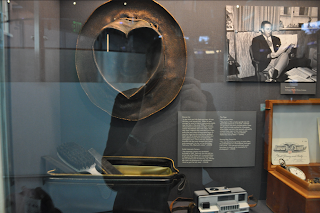 One of Walt's hat's bronzed and shaped into a heart.

The hat in the above photo was one of my favorite items. Not that it is anything over the top extravagant, but because of the story behind it. Walt always wore hats. Once, while in Mexico, Walt and wife Lillian attended a bull fight. At the end of the fight all the spectators began throwing their hats in the ring, Lillian grabbed Walt's hat but Walt stopped her before she could toss it in the ring. Walt saved his hat and later had it bronzed and shaped into a heart. On Lillian's birthday, February 15, he presented the bronzed, heart shaped hat, filled with violets, as a gift for Lillian's birthday. 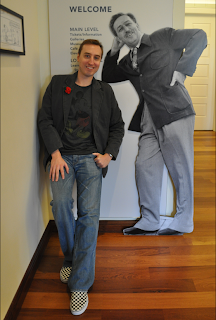 Giving Walt a shoulder to lean on.

The Walt Disney Family Museum was one of the best museums I've visited. The quality of the displays were excellent and the staff were friendly and helpful. I thank the barista working the museum cafe who willfully filled a bottle of warm milk for our baby without just saying, "no we can't do that" or giving attitude. Also, Hazel fell at one point and had a booboo and a nurse came to check on her. And the two women working in the museum store were very attentive and friendly. They seemed sincerely interested in us as people and not just paying customers.

The museum is great for all ages and I highly recommend it to anyone who has not been. There is just so much to see I know I want to go back!
Posted by Robby Cress at 9:45 PM

I completely agree! The Walt Disney Family Museum is a WONDERFUL place to visit. Even if you're not particular into Disney or animation, it's still filled with so many interesting exhibits that I challenge anyone to be bored. We were there for 6 hours and it still wasn't enough!

I love the museum and wonder at your ability to take photos inside the exhibit space. Have they changed the rules and allowed photography?

I could have easily spent more time at the museum. I definitely want to stop back for another visit on another trip.

Yes, you are now allowed to take photos in the museum, but no flash photography is allowed.

Wow! What an incredible museum! If I'm ever in the San Fran area, I'll have to check it out.