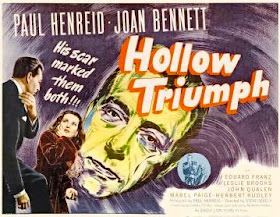 Hollow Triumph (a.k.a. "The Scar")
Actor Paul Henreid, probably best known as Victor Laszlo in the film Casablanca (1942), gives a thrilling and very different performance in the noir Hollow Triumph (1948), also known as The Scar. Henreid plays brilliant crook John Muller, who with the help of a few friends, attempts to pull a heist on a casino. Things don't go according to plan and Muller must take the money and go into hiding. The casino owner, a tough gangster, will stop at nothing to capture Muller and sends two of his thugs to capture him.
While in hiding, Muller is mistaken on the street as Dr. Bartok, a psychiatrist, who bears a striking resemblance to Muller. Only the real Dr. Bartok has a scar across his cheek. Muller takes a photo of Dr. Bartok and then using the photo for reference, creates a scar on his own cheek. Only the photo lab made a mistake and printed the image in reverse, so Muller ends up with the scar on the wrong side of his face. This doesn't stop Muller from fooling most people into believing that he is Dr. Bartok, including the doctor's tough-minded secretary Evelyn Hayn (Joan Bennett). But for how long can Muller impersonate the doctor before people begin to catch on?
A few of the film's scenes take place in downtown Los Angeles and some of the landmarks that can be seen are the Barclay Hotel, Angels Flight, and the Olympic Theatre. Here are a few of the locations seen in Hollow Triumph.
The first is the Barclay Hotel, located at the corner of 4th Street and Main Street in downtown Los Angeles. In the scene below, the two thugs that are after Muller find him in a hotel/apartment building across the street from the Barclay. 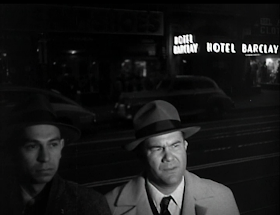 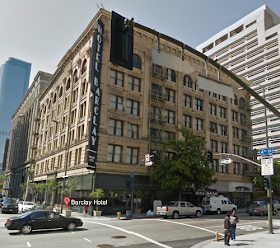 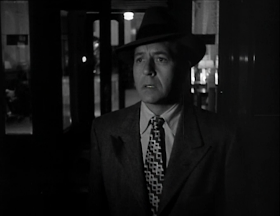 Muller leaves the apartment/hotel building across the street
from the Barclay hotel. 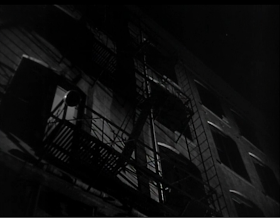 This is how the building looks in the film. 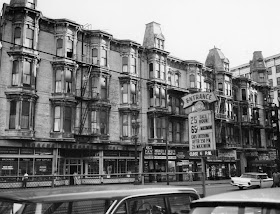 This is the Westminster Hotel, the building that was actually
across the street from the Barclay Hotel. 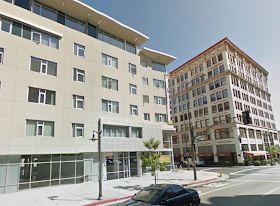 This is how the same location looks today.
Muller takes off running from the thugs.  He runs up to Hill and Third Street, pass the Belmont Hotel and up to Angels Flight next to the Third Street Tunnel. You will see that this location has changed drastically since the time of filming. Angels Flight was moved a few blocks over, the tunnel has been widened, and all of the buildings have been demolished and replaced by more modern high rise buildings. 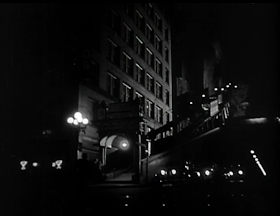 Muller runs up to Angels Flight. 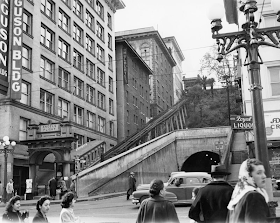 Vintage look at Angels Flight and the Third Street Tunnel. 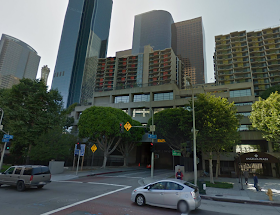 The Third Street Tunnel as it appears today. 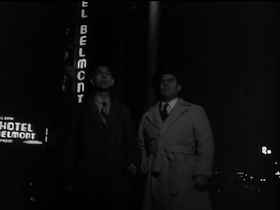 The two thugs, standing on Third Street next to the Belmont Hotel,
spot Muller boarding the Angels Flight. 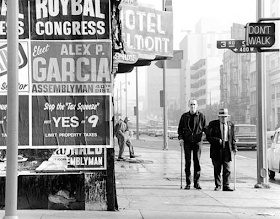 Two old men in 1969 stand at Third Street next to the Belmont. 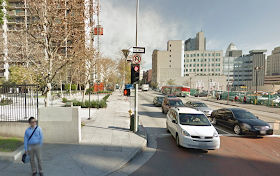 Looking down Third Street where the Belmont Hotel once stood.
Later in the film there is another chase scene with Muller (Henreid) trying to get away. In this scene we see the historic Olympic Theatre located at 313 W. Eighth Street and the intersection of Eighth and Hill Street. This same intersection was the site of another chase scene with Pat O'Brien and Bette Davis in the film Bureau of Missing Persons (1933). 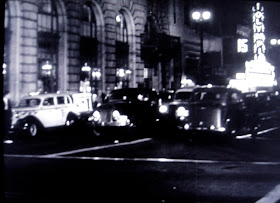 Olympic Theatre (on right) as it appears today. 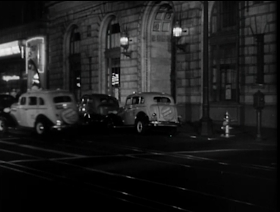 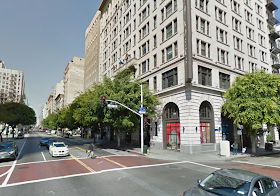 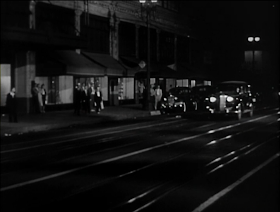 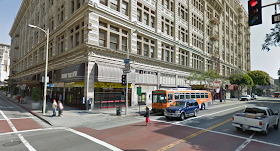 Looking North down Hill Street from Eighth Street.
Hollow Triumph (1949) is available on DVD. It is also available on Netflix as a Watch Instantly title, but under the name, The Scar.
Vintage photos from the Los Angeles Public Library collection. Street images (c) Google 2011
Robby Cress at 3:46 PM
Share