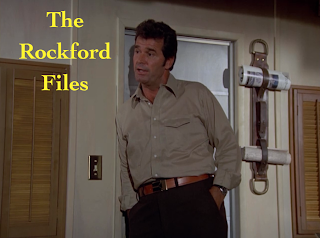 During the episode "Exit Prentiss Carr," Jim Rockford (James Garner) takes a case in the fictional town of Bay City. One of the scenes that is supposed to take place in the small town of Bay City was actually filmed on Riverside Drive in Burbank. In the now and then comparisons below we see Garner turning right from Maple Street on to Riverside Drive heading east. He eventually pulls over a couple blocks down near the intersection of Riverside and Screenland Drive. 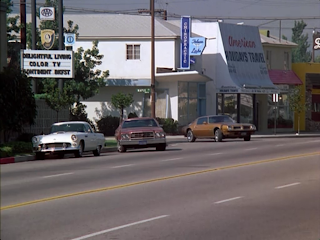 Garner turns from Maple St. on to Riverside Drive. 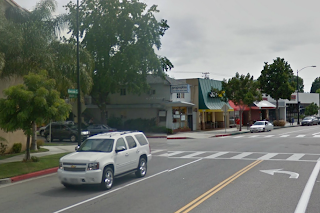 Riverside at Maple, in Burbank, CA.

I recognized this spot immediately. I walk down this stretch of street regularly to pick up lunch. During the evenings this area is quiet, but with Warner Bros. only two blocks away, Disney, NBC, Universal, and other entertainment companies with offices nearby, this area gets pretty busy during the lunch hour. A lot is the same and a lot has changed. The chiropractor business building is still there but the practice is gone. The travel business is now a Subway. And the next building over is now a pizza restaurant and a Chipotle. I can't make out what used to be where the Chipotle now stands. 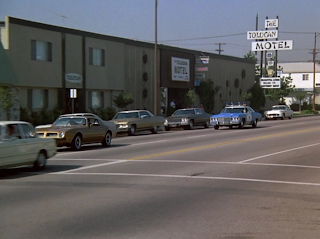 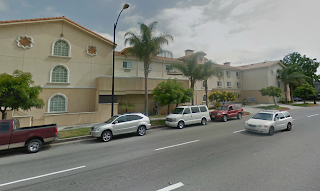 The Tolucan Motel site is now a Best Western.

As Garner drives down Riverside Drive we see a motel called "The Tolucan Motel," which is now gone. On the site today is a Best Western motel. 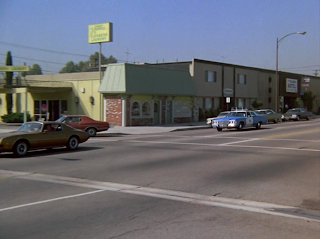 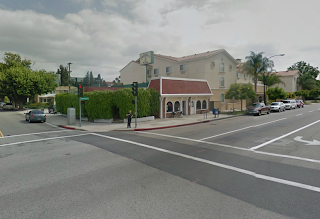 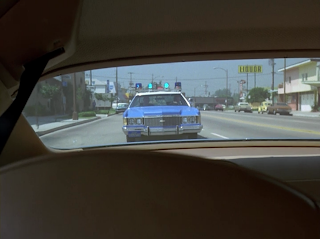 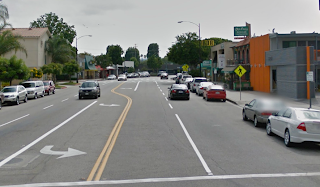 Looking down Riverside Drive from Kenwood.

In the comparison above, Garner looks in his rearview mirror and he sees the police getting ready to pull him over. We get a view looking West down Riverside from Kenwood. One noticeable thing that hasn't changed is the bright yellow liquor sign that is still standing tall. 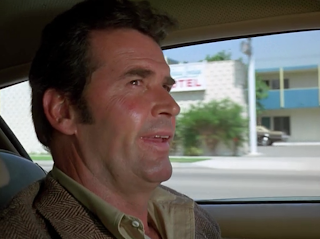 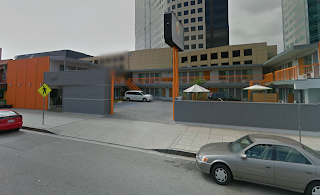 Garner passes another motel on Riverside Drive, this one across the street from the Tolucan Motel/Best Western. I can't tell what this motel used to be called, but it was remodeled in the last couple years and turned into what today is the Tangerine Hotel. 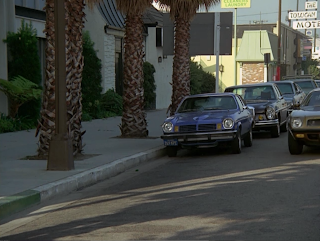 3820 W. Riverside Drive, Burbank as seen in The Rockford Files. 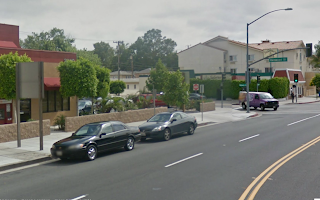 In the above clip Garner begins to pull over to the side of the street. The building seen on the corner is no longer standing. In the last few years an AFTRA-SAG Federal Credit Union building was erected on the site. 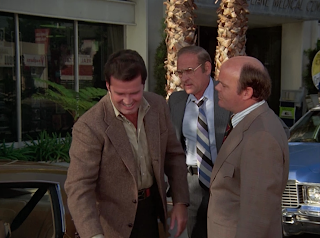 The "Bay City" police pull Garner over on Riverside Dr. 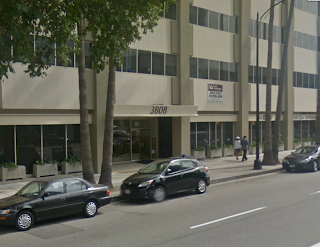 In the last comparison the "Bay City" police pull Garner over at 3808 Riverside Drive. This building has for a long time been the home to some medical offices. There has been some very recent changes to this building. In the last few weeks a Bank of the West has since moved in, at least on the ground floor, and painted the exterior a shade of white.

This is my first entry in my 1970s television flashback. I'll be back with some more The Rockford Files locations as well as Quincy M.E. and Columbo.

This year Dear Old Hollywood is having a 1970s flashback. Lately I've been catching up with the classic 1970s television shows Quincy M.E. starring Jack Klugman, The Rockford Files starring James Garner, and Columbo starring Peter Falk. All three shows filmed in the Los Angeles area and during this year I'll highlight some of the locations that can be seen in these classic shows. Maybe it's just me, but it's hard to believe that some of these locations appear in episodes that are now over 40 years old. Let's see what has changed and what hasn't in the last four decades. 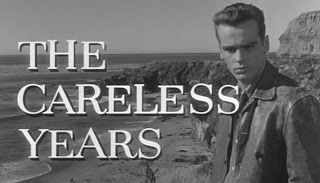 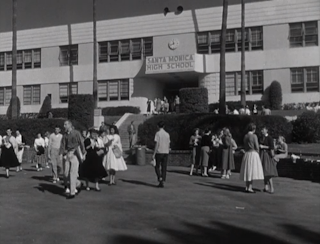 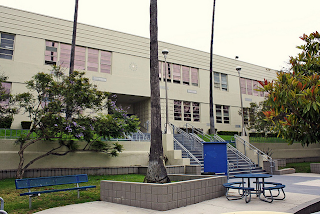 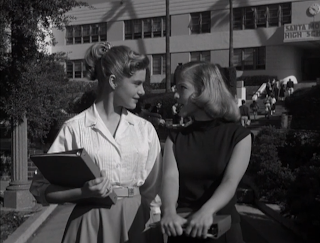 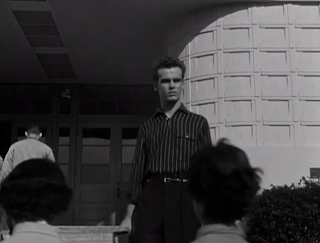 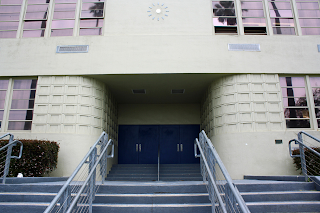 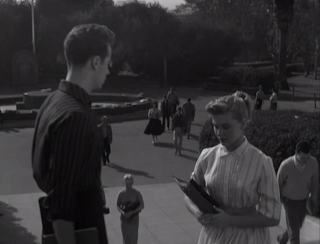 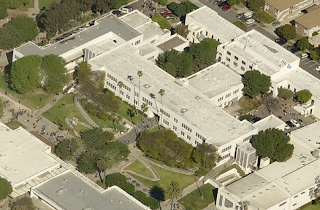 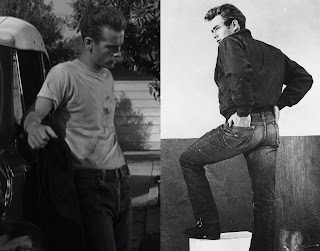 The contemporary images of Santa Monica High School I found from a Flickr page by Tony Hoffarth. He's got many great photos of Los Angeles area locations. You can visit his page by clicking here.
Posted by Robby Cress at 9:59 PM 5 comments: 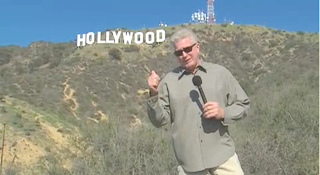 Huell Howser gives some background on the Hollywood sign.

When I first moved to California eight years ago I was fortunate, while channel surfing on TV, to stumble across a program called California's Gold. What drew me in at first was the subject. The episode that happened to be airing was about the El Camino Real roadside bells that run along California's first "super highway" connecting all 21 Missions up and down the state. What kept me watching the show was the host, Huell Howser. Huell was so enthusiastic, so congenial, and stood out from hosts on more commercial travel related programs because of his folksy charm.

I made a point to see when Huell's show would air on TV again. Whenever I would find that California's Gold was on TV I would have to sit through the show, even if I came in part way through. Huell visited so many great California places and interviewed so many interesting Californians. Some of my favorite episodes included a tour of the See's Candy factory, an episode on the long running Los Angeles restaurant, the Apple Pan, and an episode where Huell tours downtown Los Angeles. I never saw an episode I didn't like.

So, like many Californians, I was saddened to hear earlier this week that Huell Howser had passed away at the age of 67. He seemed like such a nice guy who was really interested in and proud of his adopted state. Huell wasn't originally from California, he moved here from Tennessee. Like me, he was a transplant who had a California dream.

One of the things that stood out to me right away about Huell was his accent. He had a very southern sounding accent that clearly didn't sound like someone from California. He never lost his Tennessee twang. I heard on the radio station 89.3 KPCC that one of the only things Huell "bristled" at was when asked about his accent.

Above is a video of an excerpt from one of my favorite episodes where Huell Howser visits the the Baldwin Park location of In-N-Out Burger, the birthplace of one of California's most iconic restaurant chains. Most Californians know that there are numerous items you can order that don't appear on the In-N-Out menu, there is a "secret menu," and in this segment Huell Howser learns about some of the items a knowledgeable customer can order.

Do you have any favorite episodes of California's Gold or of some Huell Howser's other programs?