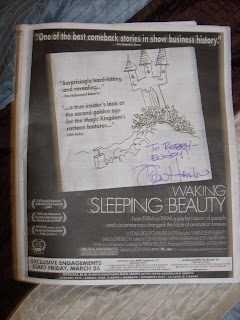 Waking Sleeping Beauty Ad
If you're a fan of Disney animation or just like to hear a good Hollywood comeback story, then you must go see the new documentary, Waking Sleeping Beauty. The film, directed by Disney producer Don Hahn (Beauty and the Beast, The Lion King) covers the tumultuous time period of 1984 to 1994, a time when Disney Feature Animation was at an all-time low and then went on to make some of the most successful animated features ever: The Little Mermaid, Beauty and the Beast, Aladdin, The Lion King, etc.
The documentary, excellently narrated by Don Hahn and told through archival footage, is filled with so many gems. There is a lot of never before seen material, including interviews and behind the scenes footage of animation meetings, press events, and company parties that took place during that ten years. All the arguments, wisecracks, and drama have not been left out. But, what I found most entertaining though was the home video recordings of the animators at work/play - I'm not sure which? And what do I mean by that?
Well, for example, video cameras were never really allowed into the animation building at the Disney lot. But, in the early 1980s, when some of the animators thought they were going to be laid off in a week, they figured why not bring a camera to work and record what was going on at the studio. They figured, "what's the worse that could happen? Be fired?" And so, the animators, in their animation building, reennacted for the camera scenes from Apocalypse Now, to demonstrate the work environment - fake explosions and bodies flying, etc.
Other fun home video moments included interviews with the then very young Ron Clements and John Musker, before they would go on to make films like Little Mermaid and Aladdin, or shots of a pre-Pixar John Lassetter and a totally deadpan close-up on Tim Burton (still looking like an awkward teenager) at his drawing desk. Its footage like this that really makes you feel like a fly on the wall looking in on the world of these animators.

Waking Sleeping Beauty trailer
The documentary begins at a time when Disney animation was close to coming to an end. The remaining old animators, those animators who started in the days when Walt Disney was still around, were set in their ways and often at odds with the new young animators. There was no cohesion or leadership and this created conflicts resulting in poor films. The Disney magic had been lost and the company was making flop after flop. It looked like the Disney animators might be laid off and that the whole company could possibly fall apart.
Then Roy E. Disney, Walt's nephew and the son of Walt's business partner Roy O. Disney, fought a long battle to bring new leadership to the company. In short, this resulted in Michael Eisner, Frank Wells, Jeffrey Katzenberg, and Peter Schneider joining the company at the top. This new leadership began to make some drastic changes at Disney, but everything was far from happy. There were many battles fought between the animators and the new executives at the company, and even amongst the executives themselves. Nonetheless, the infusion of these new leaders at Disney and the new generation of Disney animators was the perfect mix of talents that resulted in a "second golden age of Disney."
Hahn's documentary provides an insiders look at all the drama that took place during this period in Disney history. It's sometimes funny, sometimes sad, but in the end an inspiring story. Any fan of Disney should try and see this great film if they can.
Currently, Waking Sleeping Beauty is only playing in a few cities: Burbank, Los Angeles, San Francisco, Chicago, and New York. Visit the official site here to get a full listing of theaters. However, at the screening I attended last night in Burbank, Don Hahn who was on hand to answer questions afterwards, mentioned that the film is performing well and will be moving on to other cities - so if the film isn't playing near you now be on the lookout. He mentioned screenings in Florida would be coming up next. 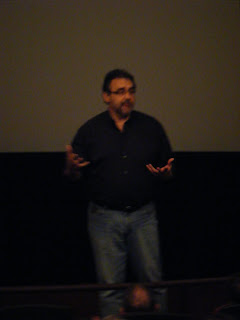 Don Hahn @ AMC Burbank 3/27/2010 - Photo by Zinnia Cress
Speaking of Don Hahn attending the screening in Burbank last night, he was fantastic about sticking around and answering many questions from the audience. He was informative, honest and very funny as well. One of my favorite moments was when someone from the audience asked Hahn if he had any response from Eisner, Katzenberg or any other key players in the film about the documentary - mainly if any of them disagreed with the way Hahn presents things in the film. Hahn responded by saying they wanted to be upfront with everyone in the beginning of making the film, that they "didn't want to stab anyone in the back, but wanted to stab them in the chest." Below is a video clip of that funny moment that my wife recorded. It was only recorded on a small photo camera so the picture quality isn't the best, but the audio turned out alright.
Don Hahn answering questions at Waking Sleeping Beauty screening 3/12/2010
After the screening Hahn was nice enough to stick around long enough to sign things and take pictures with people. Below is a photo of my wife and I with Hahn at the theater. 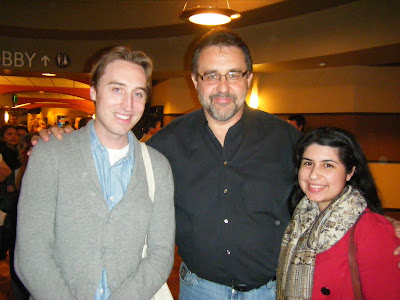 Nice! I want to see this; it's playing in Chicago now.

Hope you can make it to one of the showings in Chicago! You will have to share what you think.