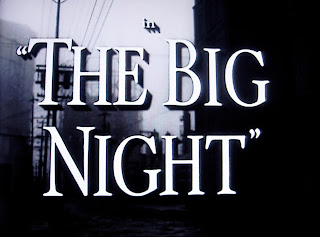 The Big Night (1951)
Director Joseph Losey had a short career making films in America before he was forced to move to Europe after being blacklisted in Hollywood during the era of red-baiting and HUAC hearings. So, it's no surprise that Losey's films didn't get much attention in the United States, especially those films that he made in Europe. Although Losey's films are highly regarded in Europe, they're still not widely recognized and appreciated in the United States, which is a real shame because Losey made some real gems.
A few weeks ago I did a film locations post for one of Losey's American films, The Lawless (1950), which was filmed in Northern California. This time around I spotlight some of the film locations for The Big Night (1951) which was filmed in Los Angeles.
Like many noir films, The Big Night (1951) is a revenge story with a very simple plot, but I was quite surprised at just how dark and moody this film was. The film stars a young John Drew Barrymore, a teenager who witnesses his father beaten to a pulp. Barrymore takes to the streets with the intention of getting back at his father's attacker, but when he confronts the man that beat his father, he discovers some dark secrets about his father. But are they true? Things are little more complicated than Barrymore thought.
In one scene when Barrymore is wandering the streets he comes up to an old church. The building is St. Joseph Catholic Church located at 218 East 12th Street in Los Angeles. The church was constructed in 1901 and stood on the site for many decades, until in 1983 a fire damaged the church and the building was demolished. A new church was then erected in its place. Below is a screenshot from the film of Barrymore approaching the church matched with some images of the church during different time periods. 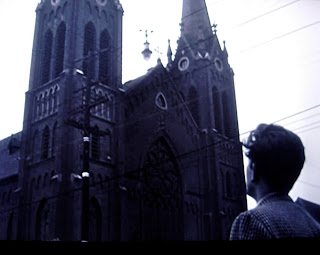 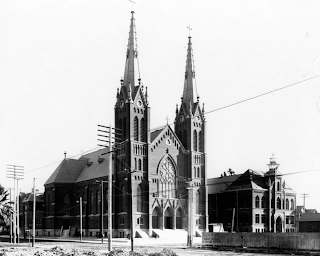 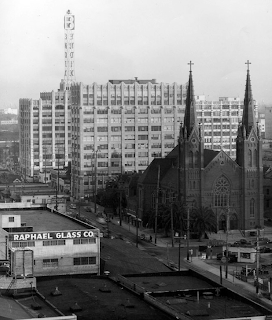 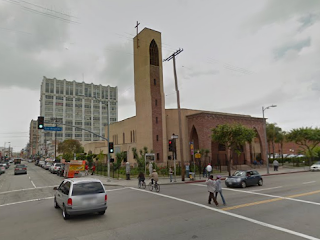 St. Joseph Catholic Church as it appears today.
During the opening of the film and later in the story, we see Barrymore running down the streets where the Southern California Gas Company tanks once stood. The intersection below is Center Street at Commercial Street near downtown Los Angeles. 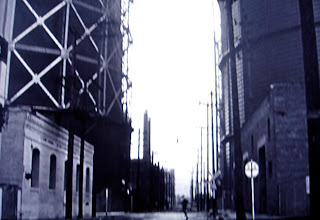 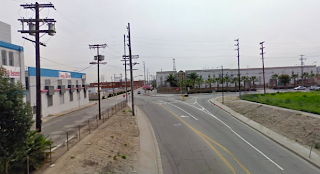 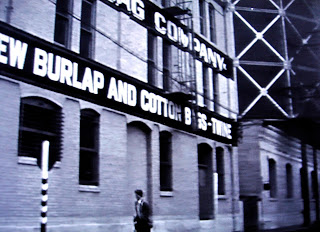 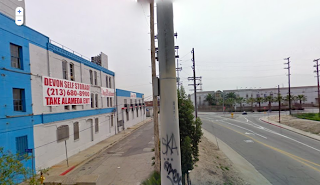 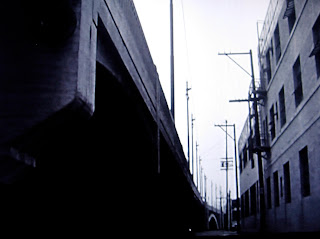 Side street next to the Friedman Bag building. 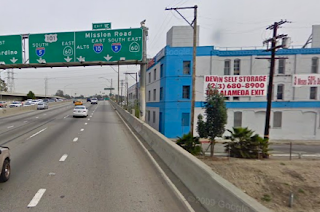 Looking down the side of the former Friedman Bag building.
The Big Night (1951) is currently available for streaming on Netflix Watch Instantly, but is not to be confused with the film from 1960 with the same title. To my knowledge it has not been released on DVD in the United States, but it is available on DVD as part of the Joseph Losey collection box set released in the United Kingdom.
Street View images (c) Google (2011), St. Joseph Catholic Church images from Los Angeles Library photo collection.
Posted by Robby Cress at 9:10 AM

Very interesting, Robby. I wish I could see some of these places myself. What is John Drew Barrymore like as an actor? I'm a big fan of his dad - and also quite like his daughter! Judy

Considering John Drew Barrymore was probaby only around the age of 19 at the time of The Big Night, he was actually pretty good and plays the part well. I like his father as an actor too and it was the family name which partly drew me to watching this film.

Though I haven't seen this movie, seeing those gas company tanks pix brings back memories of my childhood in L.A. I did, however, meet John Drew Barrymore in the 70s. He was nice, but a little out there. And I see the movie is available on Netflix for anyone who's interested. -- Paul

Finally got around to watching "The Big Night". Better than expected, but not up there with the truly great noirs and really only sort of loosely noir. But some good plot elements about the young man who finds himself in ever deepening circles of hell, so to speak. As Robby said, dark and moody. Loved the use of the L.A. locations.

Glad you got the chance to see the film. Thanks for the comment. And that must have been an interesting experience meeting Barrymore. It's too bad his career as an actor didn't quite take off. It sounds like drugs and alcohol really got the better of him.

Hi Robby, I like to think I'm pretty much up on noir films, but that one was totally off my radar. So thanks for turning us onto it. And I like seeing old LA locations in film, especially when they turn a corner from say Hollywood Boulevard and right around that corner they're at the beach or something... Re: meeting Barrymore, he wasn't a jerk or anything. Sort of aloof, but not arrogant, just as I said sort of "out there," like on another planet. But nice enough I guess. -- Paul