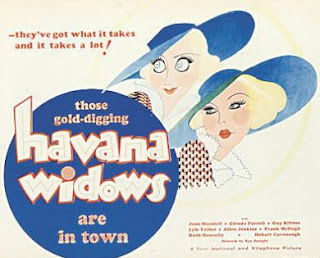 In the pre-code film Havana Widows (1933) Joan Blondell and Glenda Farrell play a couple of hardworking and underpaid burlesque girls who, after losing their jobs, find their next move as gold diggers. After learning that a former fellow showgirl struck it rich in Havana, Blondell and Farrell set sail for Cuba where they hope to find a rich gentlemen of their own. The film's cast is filled with many of the great Warner Bros. players of the period, including Frank McHugh (a crooked lawyer who helps Blondell and Farrell to set up a millionaire), Guy Kibbee (the millionaire), Allen Jenkins, Lyle Talbot, and Ruth Donnelly, but even all this talent can't help out the poor story. There are some funny lines and comical slapstick moments, but the film wanders aimlessly from one gag to the next.
Despite the Havana setting in the story, the film was shot on the soundstages at Warner Bros. Studios in Burbank, California. A few scenes of the film were shot on the Warner Bros. backlot, including the scene below where Allen Jenkins is running around New York trying to track down Blondell and Farrell, not knowing yet that they have hustled him out of some dough in order to go to Havana. In the scene below, Jenkins is walking down Brownstone Street. 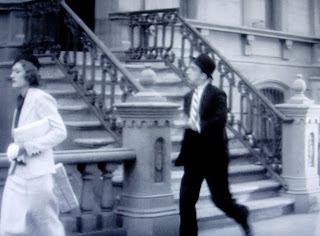 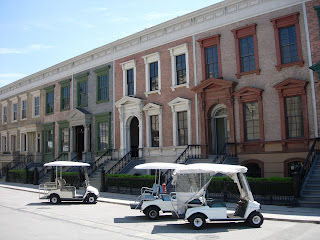 Brownstone Street on the Warner Bros. lot as it appears today. 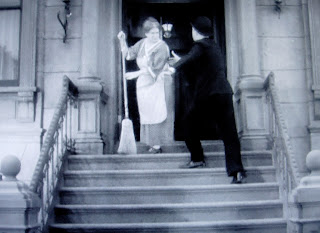 Jenkins on the Warner Bros. Brownstone Street.
Brownstone Street was built in 1929 and is the oldest backlot set at Warner Bros. The facades have changed over the years but still have kept the same general appearance.
Although Havana Widows may not have the greatest story, it's worth watching for the cast. The film is currently available from the Warner Bros. Archive Collection as a made to order DVD.  The DVD includes a double feature of Joan Blondell pre-code films, the other film being I've Got Your Number (1934).
Posted by Robby Cress at 8:43 AM

Yeah, it's kind of a letdown as a movie, but the cast makes it watchable. Good catch on the location.

I love your blog. The old photos matched up with shots of today are awesome. I recently did something similar with a 1964 "Twilight Zone" episode shot in Culver City. Check it out: http://heartofscreenland.blogspot.com/2012/02/twilight-zone-you-drive.html.

Thanks for the kind comment and for sharing the link to the your post on the "Twilight Zone" episode. Great job! I really like your idea of a blog dedicated to Culver City.