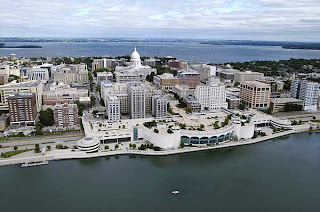 Madison, Wisconsin
(c) Board of Regents of the University of Wisconsin System

Most of our family trip was spent in the city of Madison. Golden era Hollywood and Broadway actor Ralph Bellamy once described the city of Madison, Wisconsin like this: "Madison is a beautiful city, between Lake Monona and Lake Mendota. It's cold with lots of snow in the winter. Buddy and leafy and fresh in the spring. Green and lush and hot, with frequent lake breezes, in the summer. Blazing with color and sunsets in the fall. The university [of Wisconsin] inspired an intellectual excitement. Cop's Cafeteria on the Capitol Square was a gathering place for students at night, and they were friendly...Madison was a spirited, progressive city." Bellamy was describing the city as it was during his days living in the city performing in a stock company in the early 1920s, but his description is still a perfect way to describe the city as it is today. 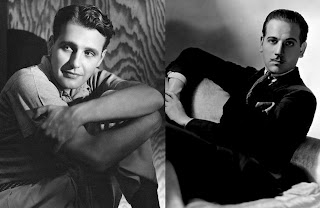 Bellamy's friend and fellow actor, Melvyn Douglas, had landed the part of the leading man in a Madison stock company. Douglas was able to get Bellamy a job as a general businessman and stage manager, earning $40 a week. The stock company performed in a theatre just off the Capitol Square. Today there are still many theaters, nightclubs, and other entertainment around the Capitol Square and in the summer there are even outdoor concerts on the square. If Bellamy were still with us, I'm sure he would feel right at home in the present Madison. 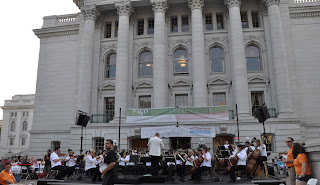 The Wisconsin Chamber Orchestra in front of the capitol.

During our visit to Wisconsin, Zinnia, Hazel and I joined some relatives and friends for one night of Concerts on the Square next to the Capitol. On Wednesday nights during the summer, the Wisconsin Chamber Orchestra performs on the steps of the capitol. Attendees can bring their blankets and picnic baskets and find a spot on the capitol lawn. There are also food vendors around the square where you can purchase food. 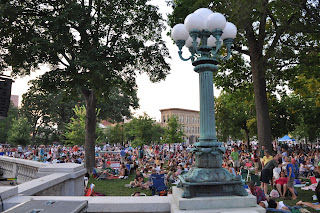 People gather on the capital lawn for some outdoor music.

Every night of Concerts on the Square has a different theme. This year the themes ranged from "Star-Spangled Spectacular" for a Fourth of July show to "Sweeping Soundtracks" featuring music from films like Ben Hur and Harry Potter. The night we went the theme was "Across the Pond" featuring British music. 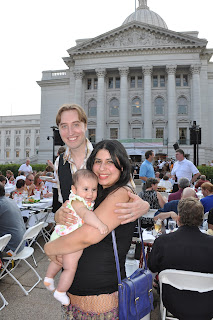 The family in front of the Capitol.

An alternative to picnicking on the lawn is to reserve a table near the orchestra on the sidewalk leading up to the capitol. Our family and friends had reserved a table for ten just to the side of the orchestra. Our view was fantastic and the sound was too! If you reserve a table you can still bring your own food and drinks or you can reserve a box supper, order from one of the vendors, or have a catered meal. 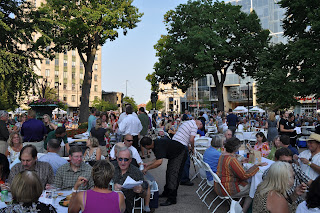 Diners who have reserved tables on the capitol sidewalk. 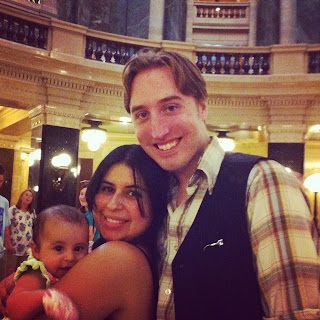 One interesting film fact is that the Madison capitol is sometimes featured as a film location but not as the state capitol. Recently in the film Public Enemies (2009) with Johnny Depp, the Madison Capitol was used as the FBI Headquarters and in Chain Reaction (1996) with Morgan Freeman and Keanu Reeves, the interior of the Madison Capitol stands in for the D.C. Capitol.

When Bellamy was in Madison, according to his memoir, When the Smoke Hit the Fan, he "lived in a rooming house at 222 Monona Avenue." He doesn't mention if Douglas lived in the same house or not, but he does mention that they jointly owned a Model T Ford. Although Douglas had the role of the leading man in the stock company, during one Sunday matinee, Bellamy got his chance to play the lead when Douglas, while putting his makeup on suddenly fell off his chair with an attack of appendicitis. Douglas was taken to the hospital and Bellamy, being about the same size as Douglas, put on his costume and played the lead role in his place. At the end of his performance playing the lead part Bellamy recalled that,

"many students came to our Sunday matinees. When the curtain touched the floor, the company lined up for a curtain call. When it rose again, through the applause came a loud, prolonged 'Hiss-ss-ss,' and the curtain dropped. I was pretty upset because I took the hiss to be for me. The curtain rose again to continued applause, and through it cam 'Boom! Bah! Bellamy-Bellamy-Rah! Rah! Rah!' I felt pretty good."

Not far from the Capitol Square, a straight walk down the eclectic State Street, a street filled with cafes and bars, head shops, thrift stores, hip restaurants, street musicians, theaters, and many colorful characters, is the Memorial Union Terrace. The Terrace is a popular hangout for University of Wisconsin students and local Madisonians that faces the shore of Lake Mendota. During the summer there is live music five nights a week and on Mondays there are movies by the lake. 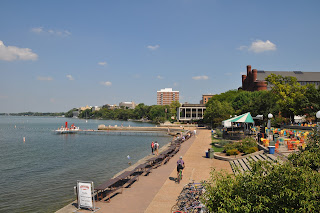 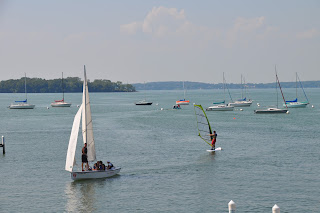 Sailing and windsurfing on Lake Mendota 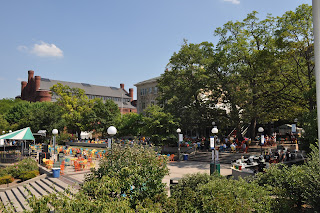 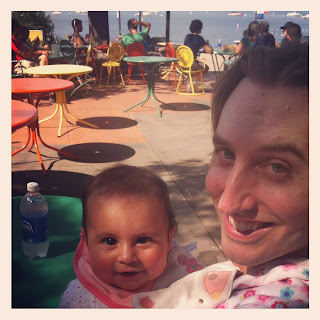 Hazel and Daddy relaxing by the lake.

On a hot summer day, the Memorial Union Terrace is the perfect place to grab a beer, a brat or a scoop of ice cream. There is the Brat Stand serving up brats and local beers on tap and the Daily Scoop which serves up Babcock Dairy Ice Cream (made fresh locally in the University of Wisconsin Dairy Plant), gourmet coffee drinks, sandwiches, wraps, salads and fresh bakery treats. 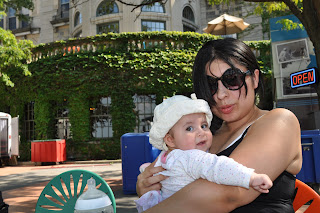 Hazel and Mommy sitting in front of The Memorial Union. 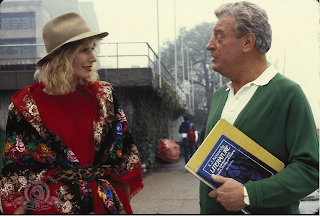 Another film to feature Madison is a personal favorite, the comedy Back to School (1986), starring Rodney Dangerfield, Sally Kellerman, Robert Downey Jr., Keith Gordon, and Ned Beatty with appearances by Kurt Vonnegut Jr., Sam Kinison, and the band Oingo Boingo. This film features quite a few places on the University of Wisconsin campus, the home of the Badgers, but in the film, the school is the fictional "Grand Lakes University."


To close on an old Hollywood note, the real University of Wisconsin has produced a long list of alumni that went on to make their way in Hollywood. Some famous University of Wisconsin students from the classic Hollywood era include Fredric March, Agnes Moorehead, Tom Ewell, Don Ameche, Macdonald Carey, and Walter Mirisch who was the producer of such films as West Side Story (1961), In the Heat of the Night (1967), and The Magnificent Seven (1960).
Posted by Robby Cress at 7:38 AM

Hey Robby, Looks like you're all having fun. I especially like the pic of Zinnia and Hazel in the previous post, where they're in the "clouds" or whatever. And I'm with you on "Back to School". Really funny movie! -- Paul

It was a fantastic trip - both entertaining and relaxing. The pic of Zinnia and Hazel in the clouds at the Lunt estate was one of my favorite pics too. We had fun taking pictures around the set pieces at the Ten Chimneys program center. As for "Back to School," after mentioning it, I've been wanting to go back and watch it again. I always get a laugh from that film.