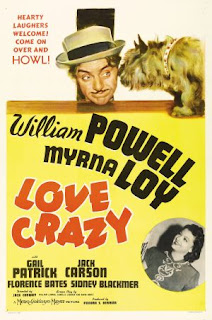 Steve and Susan Ireland are about to celebrate their fourth anniversary, but when Steve runs into an old flame, a meddling mother in-law convinces her daughter that Steve is cheating on her. After some misunderstandings Susan decides to file for divorce. Steve pretends to be crazy in order to delay the divorce and buy some time to win his wife back. That's the premise for the 1941 screwball comedy Love Crazy.

William Powell and Myrna Loy, famous as a husband and wife team in the Thin Man films, once again play husband and wife in Love Crazy. Although this comedy is a fun watch, it doesn't have the same wit as the Thin Man films and at times the humor seems forced. The best moments come from the supporting cast, particularly Jack Carson, a neighbor who gets in the middle of the Ireland's marriage and Florence Bates who plays the mother in-law.

Most of the action takes place inside the Ireland's apartment building, but of the few exterior scenes, I recognized some sets from the MGM backlot. I was later able to verify the MGM backlot sets using the book, M-G-M: Hollywood's Greatest Backlot, by Steven Bingen, Stephen X. Sylvester, and Michael Troyan. This book makes a great reference book. 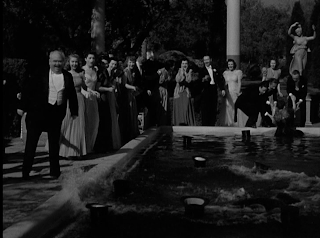 William Powell gets pushed into the "Esther Williams Pool"

In one scene, Powell, who is attending a party, takes all of the mens' hats from the hat check and throws them into a swimming pool. Powell is pretending to be crazy by "emancipating" the hats. In the process Powell gets shoved into the "Esther Williams Pool." According to M-G-M: Hollywood's Greatest Backlot, the pool was built in about 1935. Williams didn't take her first swim in the pool until 1942 but she would go on to use the pool frequently for her many aquatic themed pictures. 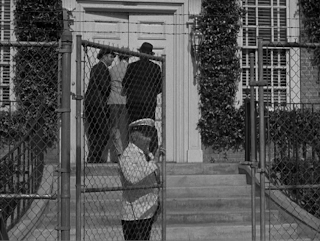 Powell is taken into the Dr. Wuthering's Rest Home

After a judge believes Powell to be crazy, he is sent to the Dr. Wuthering's Rest Home, which was really the MGM "Girl's School" backlot set. This set was possibly first constructed for the 1940 film, Forty Little Mothers. Some other movies that have used the Girl's School set included Cynthia (1947) The Cobweb (1955), and The Wheeler Dealers (1963).

Below is a video tour of the MGM backlot showing how some of the outdoor sets appeared in 1963. One of the backlot sets that is seen in the video is the Girl's School set, starting at the 33 second mark. 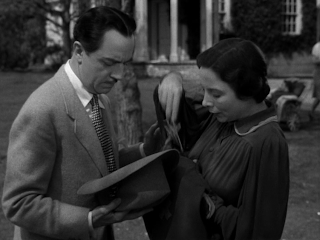 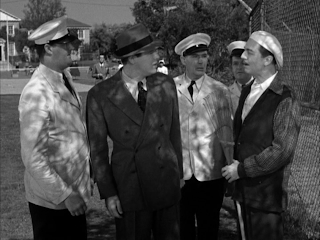 Jack Carson and William Powell on the Girl's School set.

Unfortunately, these MGM backlot sets have been demolished so the only way we can see them now is in these classic movies.

Love Crazy is available for rent through ClassicFlix and is also available to purchase on DVD.

To learn more about the book M-G-M: Hollywood's Greatest Backlot, visit the official site here. You can also read my interview with one of the coauthors, Steve Bingen, here.
Posted by Robby Cress at 8:35 AM

This film sounds like a lot of fun. Who doesn't love Powell and Loy together?

Also, thanks for posting the MGM backlot tour. Really interesting!

"Love Crazy" is one of my fave screwball comedies. Powell and Loy are great as is the supporting cast. The backwards dinner routine and so many others are very funny. Great piece on the movie and its sets, Robby. And I look forward to watching the video. -- Paul

Love that backlot tour. Wish it had been longer. You do a grand job with your location posts.