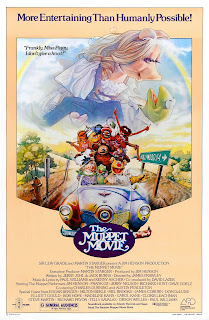 This is the second of two posts on The Muppet Movie (1979) film locations. For part one, click here.

In The Muppet Movie, Kermit the Frog leaves the quiet swamps to make it as a successful rich-and-famous frog in Hollywood. During his road trip to Hollywood Kermit acquires many Muppet friends who join him on his trip, including Gonzo, Camilla, and Fozzie Bear. This post highlights some of the locations that appear when Kermit and gang arrive in "Hollywood." 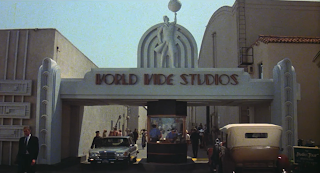 When the Muppets arrive in Hollywood they pass in front of the iconic Hollywood sign. The Electric Mayhem bus drives down the Mulholland Highway. 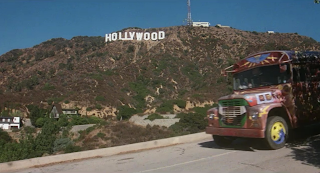 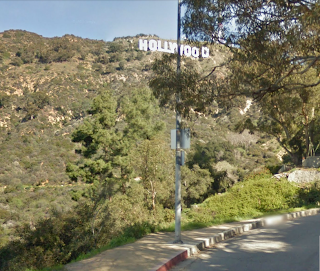 The Muppets then drive down Hollywood Boulevard heading west and crossing Vine Street. The landmark Capital Records building can be seen in the background as they pass. 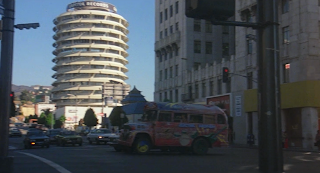 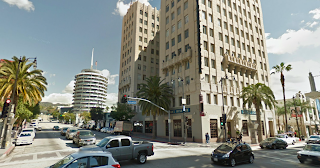 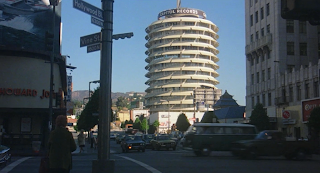 A second view of Hollywood and Vine showing the Howard Johnson. 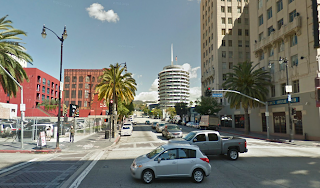 As the Muppets continue down Hollywood Boulevard they pass the Chinese Theatre. 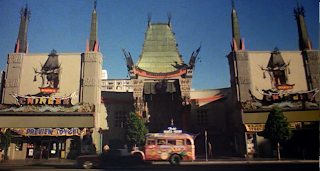 The Muppets pass the Chinese Theatre. 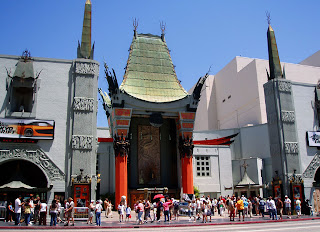 A contemporary view of the Chinese Theatre.

Trivia: According to Imdb.com one of the old Hollywood cameo appearances in The Muppet Movie is Edgar Bergen and his wooden puppet, Charlie McCarthy. Bergen died shortly after his scene was filmed in 1978. Having Bergen and McCarthy appear in the film was important to Henson as Bergen was a major reason why Henson got into puppetry.

Of the many cameos in The Muppet Movie, which one is your favorite?
Posted by Robby Cress at 6:53 PM

I love Orson Welles' cameo; it's perfect casting! That he agreed to be in the movie is pretty cool. Also, it's cool that Mel Brooks was in the movie too; he was funny.

Enjoyed that Bob Vila segment. Amazing that they walked right past the "World Wide Studios" gate.

Anybody know what stretch of highway was used as the backdrop for the "Moving Right Along" song sequence?