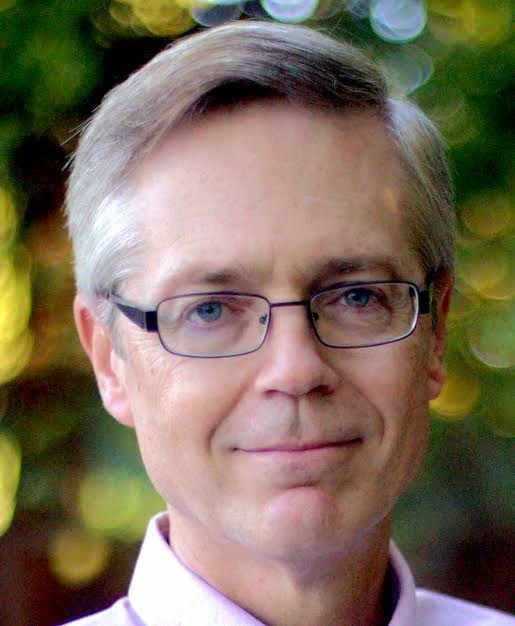 I'm back with another installment of Talking Old Hollywood and this time I had the chance to ask silent filming locations expert and historian John Bengtson a few questions. John has written three expertly researched books chronicling the filming locations of Charlie Chaplin, Buster Keaton and Harold Lloyd. He blogs about these and other silent filming locations at his website Silent Locations. John's detective work uncovering many long gone or deeply hidden locations is impressive. I'm honored to have him share a little about his research, interest in silent films, and which of the three silent film comedian greats he would choose to spend the day with.

How and when did you first become interested in silent films?

I grew up watching silent movies on Public Television, and seeing the Robert Youngson compilations.  The good silent comedians were so talented and clever that they immediately hooked me.

When did that interest evolve into hunting down silent film locations?

I’ve always enjoyed looking at old photographs, and how they draw you into real-world environments from the past.  But my interest in the location work began as a fluke.  When Buster Keaton’s films first became available on home video in 1995, I was surprised to notice that a chase scene from Day Dreams (1922) was clearly filmed in North Beach in San Francisco, near where I once used to live.  So I set my camera up on a tripod, took photos of the scenes off of my television set, and after getting the photos back from the drug store (this was all pre-digital!), I walked around North Beach armed with my snapshots and quickly found all five spots.  It was a very odd sensation to stand in a spot where many elements were exactly the same as when Buster had filmed there, and contemplating all of the history over the decades these buildings had silently witnessed.  I never set out to do a series of books, but what started as a simple curiosity kept expanding, and triggering amazing coincidences and lucky breaks, until it reached the point where I just gave in to it, to see where it would lead.  That process continues expanding even today.

What are your methods for finding locations and how might they have changed over time?

My first approach is to look for street signs and business signs in the background. Sometimes you get lucky and can find things this way quite easily using the old city directories. In one movie Keaton actually covered up a street sign with a paper bag, but I still figured out where it was filmed!  I also look for trolley tracks, “T” intersections, and special use buildings like churches and schools.  The ridge lines in the background are also good markers.

Apart from the city directories, I like to use vintage maps and aerial photographs.  The Sanborn Fire Insurance Company maintained large scale maps, covering just a block or two at a time, detailing the precise footprint and construction materials of nearly every building in Los Angeles.  The Baist Atlases were drawn with a broader view, showing all of the buildings within a several block radius.  The US Geological Survey’s topographic maps from the early 1900s also show streets and neighborhoods as they once looked.

My favorite tools are low elevation oblique vintage aerial photographs, with views like you would see from a helicopter.  These photos are true time machines, placing everything in context to everything else.  What did this corner look like, what was across the street, what was nearby?  A good aerial photo provides all of the answers, and often reveals how related shots were staged adjacent to each other.

The Internet has made everything so much easier.  I once had to travel to Los Angeles in person to study research materials, and drive around looking for clues.  Today the city directories, the maps, even the old Los Angeles Times newspapers, are all available for searching online.  Likewise, with Google Street View and Bing Bird’s Eye View, I can zoom to any spot in Los Angeles to verify matches, and to confirm whether buildings are still standing, without leaving my computer at home.
What is the most satisfying silent film location you discovered and why?

I found a block on Bronson and Olympic appearing during a tracking shot in Keaton’s Seven Chances (1924) as Buster is chased by a hoard of angry brides across a commercial street and one-by-one past a series of bungalow homes.  Ninety years later, the commercial buildings, and five consecutive bungalows are all still standing.

The only clue was a blurry bank sign in the background for a branch with a short name and a longer name.  Checking the city directory for short name-longer name combinations, none of the possible branch locations, such as the Pico & Alvarado branch, matched the setting.  I was confused by this for over two years until I somehow realized that the longer name “Tenth” used in the city directory could be spelled as a short name “10th” on a sign, and thus checked the setting for the Tenth and Bronson branch, which turned out to be the correct spot.  (Tenth Street was later re-named Olympic to promote Los Angeles hosting the 1932 Olympic Games.)

I don’t know if taking two years to associate Tenth and 10th means I am clever or slow, but it had bothered me for such a long time, so when I finally figured it out, and saw in person that the buildings were all still standing, it was incredibly satisfying.  (This was all long before the instant gratification of checking on Google Street View.  I have to laugh, because back then I had to wait months for my next trip to Los Angeles before learning whether the street was still unchanged.)

Is there any location that you haven’t found yet that you continue to research?

I was stumped by one location for years until a helpful reader of my blog solved it for me!  Early in Lloyd’s Safety Last! (1923) Bill Stother, the real life Human Spider who plays Harold’s friend, climbs a four story building in order to escape a cop. The building stood facing south along an east-west trolley line, next to an alley and the “California Garage.”  Despite all of these clues I could never figure it out.  Thankfully a reader, following only hunches, was able to identify it as the former Dresden Apartments, still standing, although heavily remodeled, at 1919 W 7th Street.  You can read about his discovery here.

Have you met any interesting people or had any unusual experiences since starting this hobby?

Well, to start, I’ve been able to meet my hero, Kevin Brownlow, several times.  I also met Mrs. Eleanor Keaton, and had a fun afternoon driving her around on a tour of Buster’s filming locations.  She and Buster once lived very near Bronson and Olympic, where he had staged that tracking shot from Seven Chances, yet it never occurred to him to mention this to her.  I’m also honored to know Harold Lloyd’s grand-daughter Suzanne, and Chaplin’s biographer David Robinson.  Lastly, I have been able to meet so many wonderful authors, historians, and movie fans along the way – it’s really been a great experience. 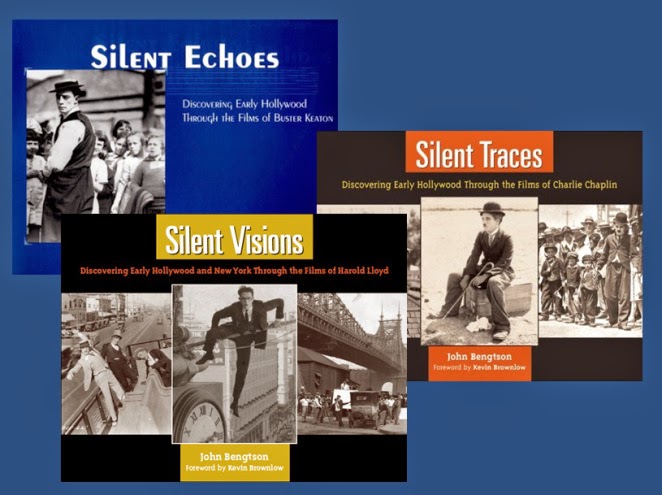 You’ve written fabulous books on the filming locations of the three greatest silent film comedians: Keaton, Chaplin and Lloyd. If you could select one of them to spend the day with, who would it be and what would you guys do during that day?

I’d pick Keaton of the three, hands down.  Keaton always struck me as the most down to earth and least affected by fame.  It would be great just to hear him reminisce, and prompt him for stories.  Of course it would also be fun to take him on a tour, and hear what memories and associations revisiting these places would trigger.

There are many locations in these silent films that have been demolished and now only exist on film. If you could actually travel back in time what now lost location would you like to visit in person?

There are a number of amazing lost neighborhoods, including the original 1880s Chinatown, the old Venice amusement park piers, and Bunker Hill.  But if I could pick just one spot it would be Court Hill.

The distinctive twin bore Hill Street Tunnel ran beneath Court Hill, the second of LA’s two incline railways, Court Flight, ran up and down Court Hill, and standing guard over it all was the unbelievably ornate Bradbury Mansion.  It was here, overlooking the Hill Street Tunnel, that so many high rise stunt climbing comedies such Harold Lloyd’s Never Weaken were filmed. The technique involved constructing a single story set above the tunnel overlook, and filming across the face of the set to capture the low-lying streets of LA in the background, while cutting off from view the bottom of the set resting on the ground.  The resulting illusion made it appear as if the set were many stories up in the air.  Further, Hill Street, which is relatively flat, was so-named because it originally lead straight to Court Hill, where it terminated before the tunnels were built. Today not a shred remains of the hill that gave Hill Street its name; it’s all been completely bulldozed.

Do you have a favorite film (silent, sound, or both) and what makes it so?

It’s difficult to answer.  Chaplin, Keaton and Lloyd are all great, but I also enjoy Fields, the Marx Bros., Laurel & Hardy, pre-Code, noir, classics, and goofy cult films like The Big Lebowski and Napoleon Dynamite.  I especially enjoy Roman Polanski’s Chinatown.  Because of the movies, it’s difficult for me to imagine the 1920s and 30s in anything but black and white.  Whenever I try hard to image the 1930s in color, it always ends up looking like Chinatown.

What do you do when not tracking down filming locations?

Well, aside from watching old movies, I try to read lots of books, I enjoy hiking and bicycling near where I live, and I like playing the piano.

Do you have any special projects you are working on now or that are coming up?

My SilentLocations blog keeps me fairly busy.  I have ideas for some further books, but the researching and writing takes several years, like running a marathon, and so I don’t anticipate starting a new book for at least a couple of years.

If you made it reading this far, thank you so much, this was fun.  Thank you Robby.

Thanks John. You can find John's books here and visit his blog here.

Splendid post, many thanks to your guest for this really interesting interview.

This was a terrific interview. This man certainly is tenacious! Thanks for sharing this. :)

I have all three of Mr Bengston's books and they are well worth owning. I've hauled them cross country a few times and checked out many of the locations that he found. The books would have been fascinating even without visiting the locations.