It's a "Wonderful" Swim Gym in Beverly Hills 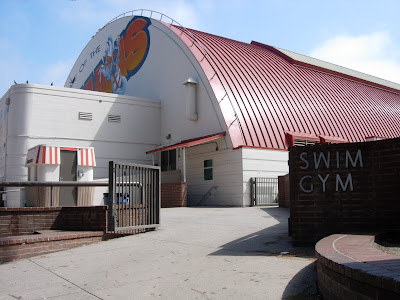 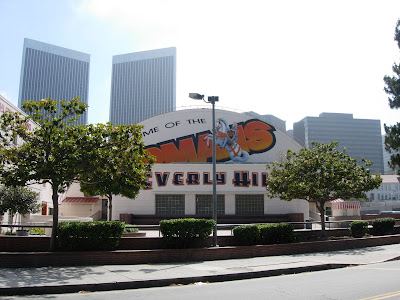 Beverly Hills High School Swim Gym, 241 Moreno Drive
Do you remember the scene where Jimmy Stewart and Donna Reed are doing the Charleston on the basketball court, when suddenly, the floor opens to reveal a swimming pool? Well, that scene was filmed inside the Beverly Hills High School Swim Gym which you can see in the above photos. This gym has a basketball court with a swimming pool underneath - the floor can open and turn into a pool! I still think that is pretty impressive now for a high school gym let alone for a high school gym back in 1947 when the film was released.
Here's a video of the "Bailey Kids" reunited in 1993 showing the Swim Gym as it appeared then. Also in the video is a clip from It's a Wonderful Life showing the Swim Gym as it appeared in the film.

WOW, I had no idea the pool from the Capra classic was still around. That was a great scene where Jimmy & Donna were dancing in It's a Wonderful Life and the pool opened up and swallowed them.
I have a new appreciation for Bev Hills High.

I love that scene in the film - great to see how the place looks from te outside :)

i cant believe the floor really opens, AND is still around!! basically, that is the coolest gym EVER. UH-MAZING.

I'm a BHHS alum & my 1st experience w/ the school was a summer swim class just b4 I became a frosh. At that age I can't recall I'd seen "It's a Wonderful Life", or if I had, that scene was not a priority file in my tweeny brain. The pool remained simply the pool all summer & I never remember any indication, nor anyone mentioning, that we were working our butterfly beneath a retractable anything! Imagine my shock when I went to my first b-ball game that fall. I was all "where are we going? this is the pool!" & finding no pool but this magically transformed regulation court gym! Then of course years later the 2nd shock of watching IAWL & recognizing our "swimnasium". That school was like a college campus... I went there 20++ yrs ago & years b4 even I'd arrived we'd already had our own radio station, cable channel, & an awesome planetarium programmed w/ lasers, "warp" effects, planet flybys (synced to tunes like "Welcome 2 the Machine")...& a food court! this pic (...duhh..) took me back!

the neat thing is through Capra's magic touch, growing up whenever I watched the movie I always just believed this gym was one that was just down the street, it was a highschool in my town, either it is still there or it was taken down due to old age, thats what made Capra a genius, he was able to make a film so relatable you swear it took place in your own home town. I really had no idea it was in Beverly Hills.