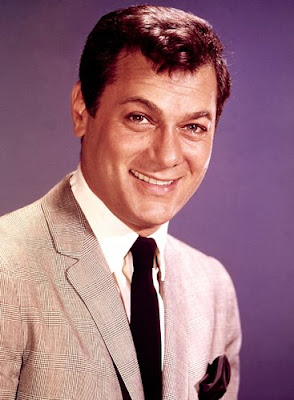 Tony Curtis
Many thanks to the Kitty Packard Pictorial blog for the heads up to the Jules Verne Festival event honoring legendary actor Tony Curtis. On Saturday, June 13, 2009 the Jules Verne Festival was all about Tony Curtis. Beginning at 2:30pm was a screening of the Curtis film Houdini at the historic Million Dollar Theater in downtown Los Angeles, followed by a dinner with Curtis at the Los Angeles Athletic Club, and back to the Million Dollar Theater for a special 50th anniversary screening of the hilarious film Some Like it Hot. My fiance Zinnia and I were fortunate enough to attend the evening events. Here are some photos from that night. 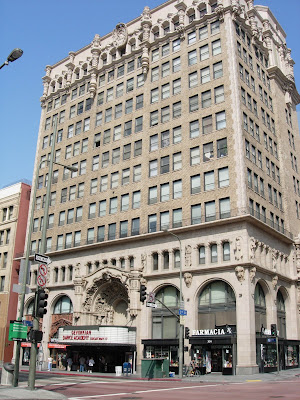 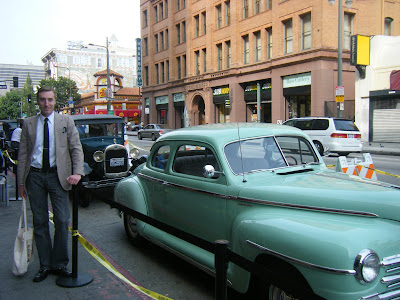 Out Front of the Million Dollar. Bradbury Building in Background
Out front of the theater there were many old classic cars lined up. I especially liked this green Plymouth. They certainly don't make cars like they used to. Also, you may recognize that building from my earlier post on Double Indemnity film locations. That's the historic Bradbury building. 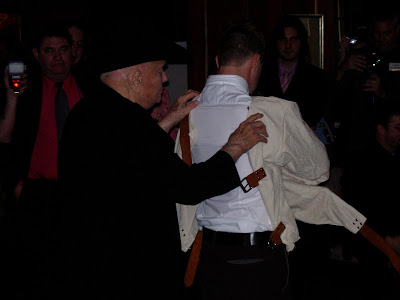 Tony Curtis strapping in escape artist Curtis Lovell II
Once the Houdini screening let out the shuttle took us to the Los Angeles Athletic Club for dinner. There was champagne, shrimp, sushi, ice cream sundae bar and all sorts of delicious food. For dinner entertainment, the escape artist Curtis Lovell II performed Houdini's straight-jacket escape stunt. Tony helped to secure the straps of the straitjacket. 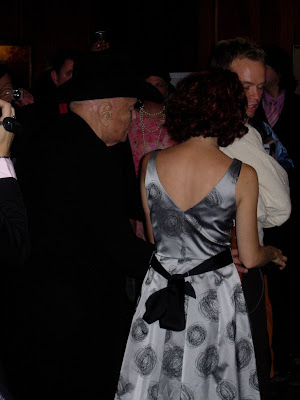 Assistant steps in to help strap in Lovell 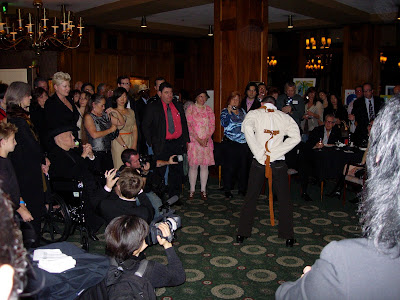 Lovell attempting to break out of the jacket while Curtis watches.

After the escape stunt Tony Curtis started to sign his memoirs. Curtis was very generous and took time to sign autographs and take photos with everyone in the room. Some time you meet celebrities and its disappointing to learn how big their egos have become. Not Curtis. He's a class act. I felt the same way when I met actor Robert Wagner for the first time a few months back. Both men seem to have an appreciation for their success and the hard work it took to get to their level. They both seem to have a respect for their fans knowing that it's because of them in part that they had such successful careers.
Thanks Tony for the autograph and photo! 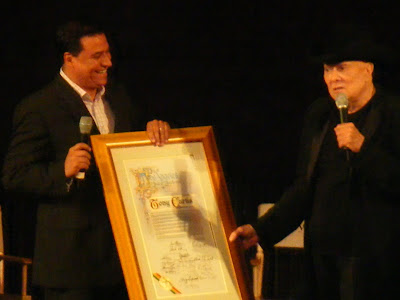 Next we hopped back on the shuttle to the Million Dollar Theater for the 50th anniversary screening of Some Like it Hot. Jean-Christophe Jeauffre and Frederic Dieudonne, the founders of the Jules Verne Festival were the host for the night. After they showed a film reel with many entertaining clips from Curtis's many films the City of Los Angeles presented Curtis with an award for his many contributions to the city. 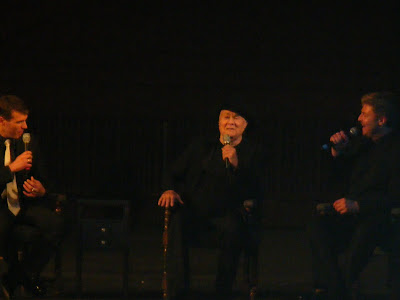 Tony Curtis came out on stage and shared many of his life stories. And even though Tony Curtis is getting up there in age (he just turned 84 on June 3) he is still an amazing storyteller. His stories were told with wit and perfect comic delivery. One of my favorite stories that Curtis told was about when he first met actress Marilyn Monroe for the first time. Curtis was a new actor under contract at Universal, only 22 years old, and he was asked by one of the Universal guards to give another young actress who was not under contract a ride back to her hotel. Curtis looked at the actress and started to describe her: "she wore a dress that was a little above her knee, orange and yellow in color, cinched in where her waist was (and)... her bosoms were remarkable!" Curtis turned back to the guard and said, "I would be privileged to give her a ride."
Another a funny story was told by Jean-Christophe. At another event in Paris honoring Tony Curtis, a French reporter asked the actor, "Mr. Curtis, you are getting older and you have a wife who is almost half your age. Aren't you worried about having sex with a woman her age?" Curtis replied without skipping a beat, "If she dies, she dies." 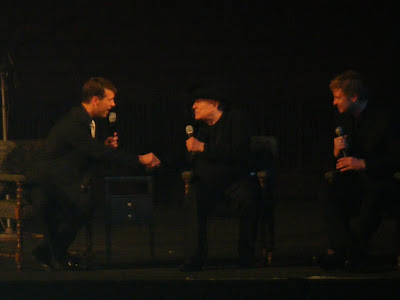 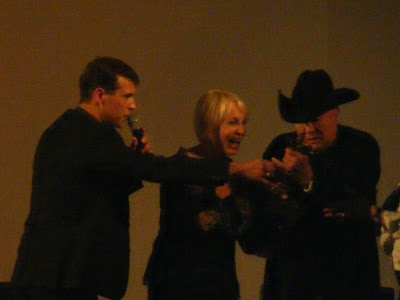 After sharing some stories Jeauffre and Dieudonne brought up on stage two of Curtis's co-stars from Some Like it Hot, Tracy Moss and Marian Collier, to present him with the Jules Verne Award. The actresses were members of the all-female band in the film. 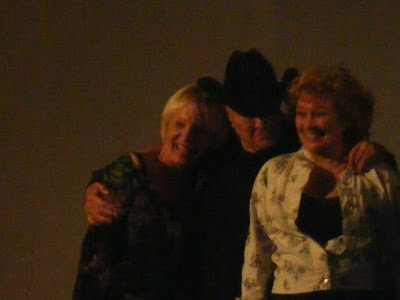 After the award presentation it was time to start the film. Some Like it Hot played to a full house and the theatre was filled with laughter from start to finish. The film holds up pretty well and is a true classic with many great performances.
Posted by Robby Cress at 10:25 AM

And thanks to Zinnia for taking the photos inside the Million Dollar Theater.

thanks so much for taking me! i was quite impressed with my little fuji for taking pics so far off, you're welcome. :) the highlight of the night for me was when he smiled at me and called me "sweet darling". :)

Why did you not give the actresse's name. I am Marian Collier the one in the white and black top and Tracy Moss is the other actress. We were both introduced on stage with Tony'
Marian Collier
aka Olga in Some Like It Hot film

Why were the actresses not named. We were introduced on stage with Tony Curtis. I am Marian Collier the one in the black and white top and the other actress is Tracy Moss

Many thanks for your comment. The omission was not intentional. I could not hear when they mentioned your names and did not want to incorrectly name any of the other actresses from the film by mistake. I did want to include your names on the blog post and have now gone back and done that.

It was a delight to see both of you on stage. Thanks again for your comment so that I could share your names in the post.

Dear Robby, you're great. Thanks so much for the adding info on names . i do have pic of me with Tony and Marilyn in the bathroom scene bringing them the ice and drinks.if you would like them please let me know.Let me know where i can send them to you.And if you can send me a pic of Tony and I and Tracy , i would love it.
Marian Collier

Those photos sound great! I would love to see them. You can email me at wrcress@gmail.com.

I'll reply with the photos of the three of you at the event :)

I was there for Some Like it Hot! The Art Deco Society had some of us volunteer to run around like flappers, though I think once we were there they didnt know what to do with us. Not complaining...I got to run around the Million Dollar AND get a second row seat :). BTW I have your Marilyn moment on tape (apologies it was a digital camera):

Great photos and video. I always like seeing the Art Deco Society crowd when they're about town dressed to impress. It's like stepping back in time with that group around.

Oh, I'm so envious! I love Marilyn, love Tony, and love Some Like It Hot! How cool you got to go!

Thank you so much for the great post on Tony Curtis! I'm a "forty-something" and I remember watching Tony's movies with my parents. I adore Houdini and Some Like it Hot is one of the most wittiest and clever movies ever! It was nice of you to note how gracious Tony was when signing his book. That is refreshing and only makes me appreciate his artistry more! I always look forward to your update posts.

What a great post, and boy, does that sound like a cool event! Love the pics you posted.

Oh Robby, I'm *so* glad you got the chance to attend! I was not there as I'd so wanted to be, so I'm really glad you posted the pictures!! It looks like you guys really had a swell time!

As a fan of both "Sweet Smell of Success" and "The Persuaders!" I'll freely admit to be envious of you!

Yeah, it was a great time. Thanks again for posting the event details on your blog! You didn't by chance make it over to Rocket Video for the Jerry Lewis appearance did you?

I am pea green with envy!! What a wonderful time! You and your fiance are too cute! I hope Marion gives you some pics to post-- Some like it Hot is THE best film!

I was in L.A. when Tony Curtis was at the L.A. Theatre! Do you take requests?

I was at this event! Of course, I didn't have a blog or Google account at the time, but it's nice to see the evening documented here.

I got to meet Tony for a brief second after the movie, at The Edison a few blocks away.
What a fantastic night!