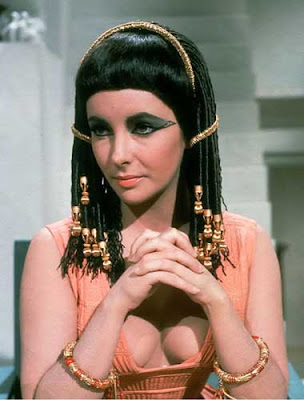 Elizabeth Taylor as Cleopatra
The 1963 film Cleopatra, starring the always beautiful Elizabeth Taylor in the title role, is the third most expensive film ever made. A lot of money was spent getting this film right. Despite all the money spent and the all star cast which also includes Richard Burton, Rex Harrison and Roddy McDowell, the film was a complete flop. 20th Century Fox almost went bankrupt because of this film!
Although many reviews of Cleopatra were negative, Bosley Crowther of the New York Times called the film "one of the great epic films of our day" in his 1963 review. And Cleopatra would even end up winning four Academy Awards.
To go along with the big budget of the film there was a big movie premiere at the historic Pantages theater in Hollywood, California. 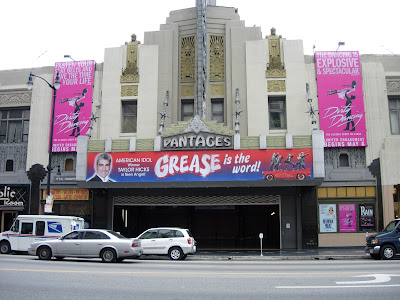 Pantages Theater, 6233 Hollywood, Blvd, Hollywood, CA
Here is a video of the Cleopatra premiere at the Pantages theater. The video is a bit psychadelic but keep your eyes peeled for some old Hollywood stars:
You're thoughts?
Posted by Robby Cress at 7:25 PM

Hi Robby,
Yes, they still talk about how Cleopatra almost bankrupted Fox (and how, to survive they had to sell off most of their backlot, creating Century City). I've heard that Elizabeth Taylor was so unhappy with the film she didn't show up to the premiere ... never was sure if that was true but she didn't appear in the video, so who knows. I guess the story has a happy ending: Fox's next big film was a surprise hit, The Sound of Music. I guess you could thank Julie Andrews for "saving" Fox!
Best,
Marty

I had a friend who worked at Fox, who told me after the film was made, that FOX could not even afford to pay their light bill. They were broke. They ended up selling off parts of the lot to satisfy the debts.
Thus, we have the Century City mall today and assorted hotels and condos on the land where parts of 20th Century Fox once were.

Interesting topic, thanks for sharing. I'd never known this one was a financial flop until recently, probably because of all the Oscar hype, like you mentioned.

Nice point. Fox had "Sound of Music" just like Paramount had "Love Story." When I think of Julie Andrews saving Fox it makes me think of the film Bedazzled (the original) where the magic word is "Julie Andrews."

It's kind of crazy to think that a major studio like 20th Century Fox couldn't even pay their electric bill. It's said to think that much of the lot was sold off for mall and condo property. I've been on what's left of the Fox lot but wish I could have seen it in the glory days.

It's interesting how we perceive some films over time. I always think, "what films of today that are total flops will be considered hits or respected films in the future?"

Yes, that is a very interesting question indeed.

not about the post itself- more on your comment- when peter cook in bedazzled uses his magic words, "juUuuliEEEE AndREEEEWS!" ehhehehe :)

I LOVE that movie!

One side note, John De Cuir Sr. became the Production Designer for both "Hello Dolly!" and "Cleopatra" and in doing so held the distinction of "the only man to bankrupt Fox twice". His uncanny ability to talk the execs into bigger and bigger and even bigger sets made this moniker believable. Remnants of Dolly street are still glued to the walls of the Fox lot and that many of the old Cleopatra sets are in storage and have been reused in Italy. He was an amazing talent.

Another thing. I sat through that whole video and never saw Liz Taylor or Richard Burton. Did I miss something?

Isn't it funny how moive stars appear timeless because we've seen them out of context in films and then the camera turns around from these icons and you see all these geeky bespectacled fans? I had this experience watching an Elvis concert film watching him kiss all of these foamer retro girls.

Nice addition about John De Cuir Sr. It's pretty wild how far he was able to go with his designs withour the studio stopping him. Results: Visually successful, financially - not so much - unfortunately.

And no, you didn't miss Richard Burton or Elizabeth Taylor - or at least I didn't see the neither. The biggest cast members I saw were Rex Harrison and Roddy McDowell. Gene Kelly was also in there if you watch closely.

I always like seeing what the 'normal folk' look like in these old videos. Many times they seem dated and yet the stars do seem somewhat timeless.

The funny thing about De Cuir is that "Ghostbusters" was likely his highest grosser. He did "South Pacific" and "King and I" as well. Sometimes they would tell him to stop building and he did anyway and by the time the bills came in it was too late.

I lived in New York at the time and I'm almost positive that Liz and Richard were at the NY premiere. It was a gargantuan event ("My Fair Lady" had one just as big the following year) but, for some reason or other, I missed it. I had two tickets, however, for the first public showing of "Cleopatra"- a matinee the afternoon after the premiere. My mother bought them months before but at the last minute she couldn't make it so when I got to the theater I asked if anybody was interested in buying it and a crowd of at least fifty people fell upon me. I felt like Sebastian Venable in "Suddenly, Last Summer"! I sold it to a nice-looking older woman who kept thanking me for four hours. We both HATED the movie.

The Deanna Durbin movie called THREE SMART GIRLS had its premiere at The Pantages - and it was a smash hit!

in 1963 "Move Over Darling" with Doris Day made Fox money, so not all their films were turkeys. They should have kept their backlot, Century City is a ugly mess today.

Actually, it was said that Fox did not report the full earnings of CLEOPATRA largely because it was the first time an actress (Elizabeth) got a cut of the gross. And the first time an actress made $1 million dollars. Remember, they went through 3 directors, and de Cuir had to rebuild Alexandria (no CGI folks) 4 times. I know I was there. I was only 5 years old, but I was there. And de Cuir saved Fox a fortune by building the Dolly set OVER existing buildings and drawing HUGE publicity for a very weakly cast Dolly. My dad rocked. I miss him everyday.