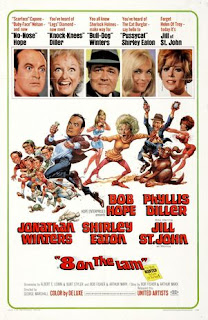 In the film Eight On The Lam (1967) Bob Hope plays a widower trying to raise seven kids on a bank teller's income. One day, Hope stumbles across $10,000 in the parking lot of a grocery store and he must decide whether to keep the money which his family could certainly use, or turn the money over to the grocery store for the rightful owner to come back and claim it. Hope decides to wait two weeks to see if any one reports in the newspaper that they have lost the money. When no one claims the money, Hope decides to keep the cash after checking with the management at his bank first, to see what the best thing to do would be.

Hope goes on a spending spree, buying his teenage daughter new dresses, the other kids the toys they want, and a larger car for the family to ride in (trading in the little VW bug that was way too small for a family of 8 plus one dog). Meanwhile, the bank finds out that they are missing $50,000 and immediately they think that Hope is embezzling the money. After Hope is tipped off by one of his co-workers that the bank is sending the cops to arrest him, Hope's family babysitter, played by the theatrical Phyllis Diller, tells Hope that he should take the seven kids and go somewhere where the family can lay low until things get figured out. Hope loads the kids into the new station wagon and tells them they are going on an "early vacation."

The film is not one of Bob Hope's best, but it has some fun moments, including the usual Bob Hope one-liners and a big screwball chase scene. In addition to Hope and Diller, the cast also includes Jonathan Winters and Jill St. John. Although set in Altadena, California and Phoenix, Arizona, quite a bit of the film was actually filmed in the Larchmont Village neighborhood of Los Angeles, located just a few blocks south of Paramount Studios. Here are some of the film locations in Larchmont.

At one point in the film Hope sneaks into the bank that he works at to see if he can find any evidence that will clear his name. While Hope is in the bank he accidentally triggers an alarm. Soon the cops are on their way. Below are a few scenes of the cops driving down Larchmont Boulevard in the heart of the village. 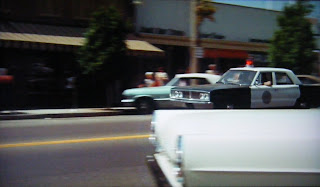 192 N. Larchmont Blvd as seen in Eight On The Lam 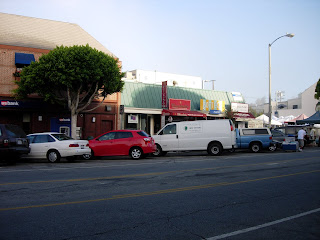 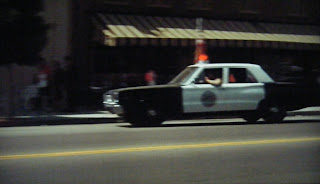 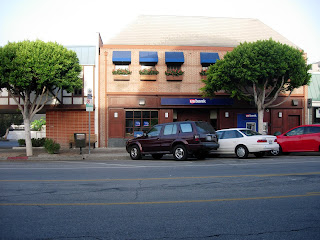 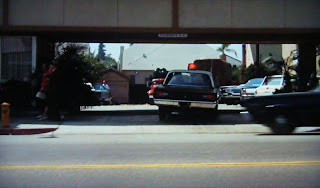 147 N. Larchmont Blvd. The police arrive at the bank. 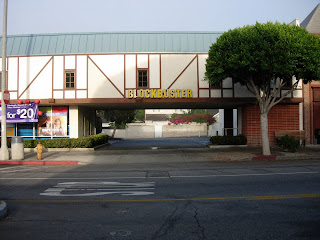 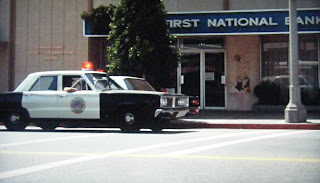 147 N. Larchmont Blvd. The cops arrive at the bank. 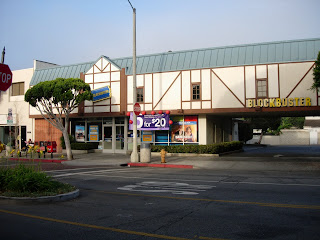 147 N. Larchmont Blvd. The bank is now a Blockbuster. 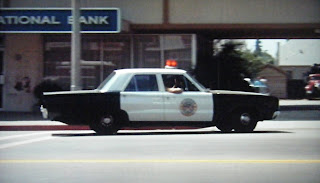 When the cops arrive at the bank, Hope, who is disguised in a beard, sneaks out the backdoor into the back alley. The alley Hope goes down is just behind the shops on Larchmont Blvd, but is actually a couple blocks down from where the bank is supposed to be. 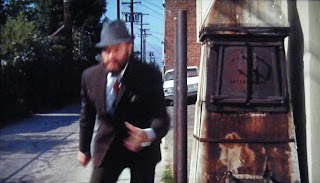 Hope exits in the back alley. 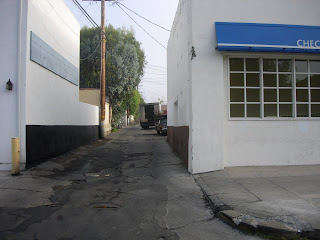 The alley behind the shops on Larchmont Blvd. 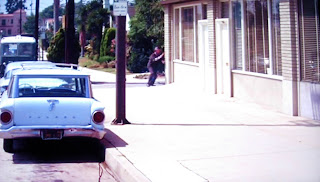 Hope comes out of the alley at First Street. 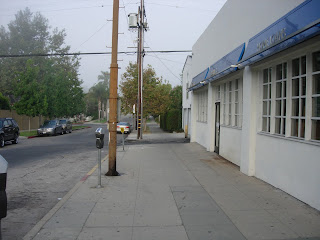 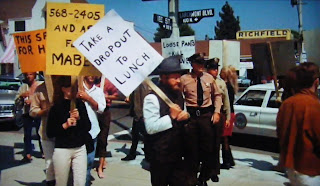 Hope pretends to be a protester. First Street at Larchmont Blvd. 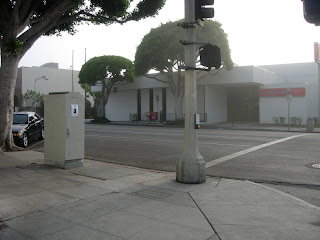 You can see in the image above that the Richfield gas station is no longer standing. Today there is a Bank of America. The tall red roof building next to the gas station is also now gone. Below is another view looking at the southeast corner of Larchmont Blvd. The house is still standing but now is surrounded by a wall of bushes. 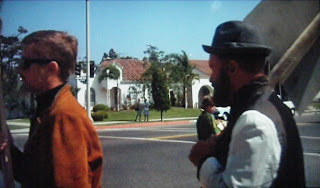 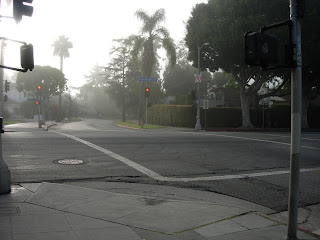 Looking at the Southeast corner of Larchmont Blvd. 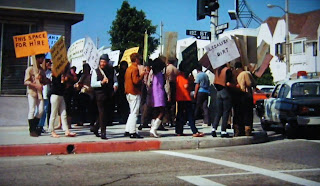 Another view of First and Larchmont 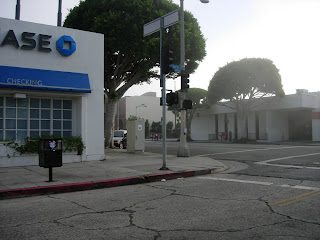 I almost didn't notice this next location with the Safeway, but fortunately, I have a photographic memory when it comes to buildings and I remembered the funny shaped rooftop of the building next door to the Safeway. When I was walking down the sidewalk of Larchmont Blvd I saw the same rooftop on a building next door to a Right Aid. I took a picture of the location so I could see if it matched what I remembered from the film and it certainly does. 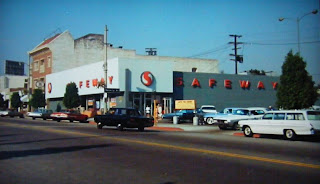 226 N. Larchmont Blvd in the film was a Safeway grocery store. 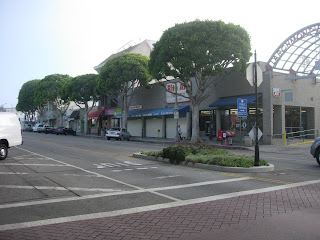 Your thoughts?
Posted by Robby Cress at 11:43 AM

yeah, yeah... just a comment from wifey-- but as always- faboo detective work cutie! :) it really is amazing how through your work- we find all these spots that we walk through all the time and just had no clue of the streets past... oOooOoh if streets can talk! :)

Fantastic work! What I wouldn't give to visit these places!
I live in the south of Ireland, so most film locations here are green fields, castles and the seaside. Fota is a place that was recently used for filming, but I'd love to recognise more locations from some of our few classics :)

Excellent post as usual. I was actually watching "Eight on the Lam" the other week so it was cool to see what the locations look like now.

So many films must have been shot in the Larchmont area over the years. I've seen the drugstore on Larchmont Avenue in a couple of silent comedies and Wheeler and Woolsey films. Next time I'm in Los Angeles I'm heading out in that direction with a map and a camera!

Great work. Buster Keaton filmed scenes from Sherlock Jr. on Larchmont, as did Harold Lloyd in Hot Water and For Heaven's Sake. The Three Stooges filmed Pop Goes the Easel and Hoi Polloi. If you really want to see Larchmont at its prime, check out the "Weiss-o-rama" DVD. It's a collection of 20 Weiss Brothers silent comedies filmed in 1928. The films are OK, but they are absolutely pristine, razor sharp 35mm prints that could have been filmed yesterday. They filmed all over Larchmont.

I have books about where Keaton, Lloyd, and Chaplin filmed their movies on location (Silent Echoes, Silent Vision, and Silent Traces) in case you are interested.

Thanks for the comment John with all that info. I definitely need to rewatch "Sherlock Jr" and those Harold Lloyd films! And thanks for the suggestion on the "Weiss-o-rama" dvd. I have never heard of it before but it sounds like something I would certainly be interested in. Those books too, will definitely be must haves for my personal library.

Who played the teenage daughter ?

I swear the man who got hit by the ice cream in the beginning of the movie was Jack Benny! He's not listed, but it sure looked like him. The teenage daughter was Avis Hope. Bob Hope's neice.