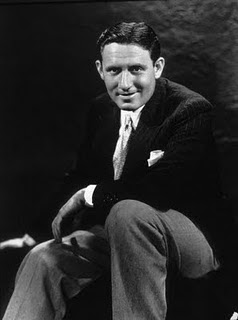 Spencer Tracy
By 1930, Spencer Tracy was starting to get noticed on Broadway. Just a year earlier talking pictures were the big news out of Hollywood and many of Tracy's fellow Broadway actors were leaving the east coast for the west coast - ditching the stage for the screen. Tracy, who had heard the rumors of the money to be made in movies didn't totally rule out the idea of heading to Hollywood himself, although, not being the most handsome of men, he wasn't the typical image of a leading man of the screen, he had some uncertainties.
While performing in the Broadway show The Last Mile, the legendary director John Ford, took notice of Tracy. Ford has said, "More than anything else I was tantalized by his movements. I don't think many people were ever conscious of Spence's bodily discipline. After seeing the play twice I still didn't have a good impression of what he looked like, and aside from knowing that he had a fairly good voice it failed to register for me in terms of its quality. But his catlike agility was something extraordinary. He made every movement sharp and meaningful, and didn't waste a single turn."
After the show, Ford met Tracy backstage at his dressing room. The two men hit it off and Tracy suggested that they go to the Lambs Club for a nightcap. Ford was surprised to see so many Irishmen there. "Bill Frawley was there, and Allen Jenkins. And that was the night I met Pat O'Brien. Pat got to telling Irish stories - he was spinning the yarns even then, and nobody else is really in his class."
Later Ford arranged for Tracy to meet Fox executives in their New York office. They offered him $800 a week - more money than what Tracy was used to making up to that point. Pressing his luck, Tracy asked for a $1,000 and got it!
Tracy was soon on a train from New York to Hollywood to join the cast of Ford's film, Up the River. After a six day train ride Tracy arrived in Los Angeles in late June. He was picked up at the station by two young men from Fox who drove him to the Hollywood Hotel where he would stay while making the picture.
Below is a postcard image of the Hollywood Hotel which used to stand at the corner of Hollywood Boulevard and Highland Avenue. It was the place to stay when you came to Hollywood, however, by the 1950s the hotel got run down and was eventually demolished. Today the site is home to the Hollywood and Highland Complex, filled with shops, restaurants, and the Kodak Theater, the current home of the Oscar ceremony. 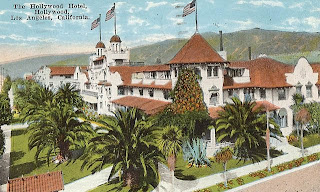 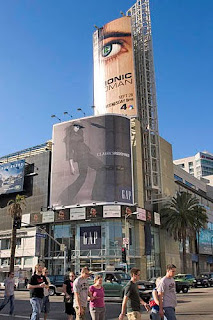 Hollywood & Highland
Once Tracy got settled at the hotel he was taken to the old Fox studio on Western Avenue. At the studio Tracy met the general manager, Ed Butcher, who informed him that his costar was to be another unknown actor from the east, Humphrey Bogart. Tracy got a tour of the lot and saw the mill, the workmen and all the film equipment.
Because of problems with the script, that first week Tracy had nothing to do, so he would spend his days roaming around the studio lot, questioning technicians and watching films being made on the lot. Tracy started meeting other people at Fox, including Raoul Walsh who would later direct him and Marion Morrison who was making his first film, as John Wayne.
Another actor Tracy met was the huge star Will Rogers. Rogers, who still followed what was happening on Broadway was already familiar with Spencer Tracy. The legendary actor invited Tracy to his table at the Fox commissary and the two became fast friends. Rogers even invited Tracy to the Riviera Country Club to watch the polo matches. Eventually, Tracy would become an avid polo player himself. 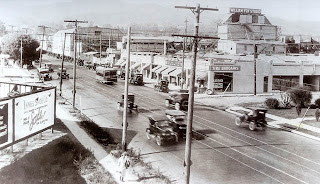 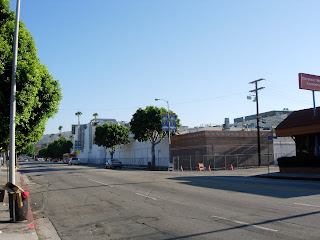 Looking North on Western Ave. at Fernwood today
The Fox lot in Hollywood is no longer.
After a month had passed work had finally begun on Up the River. One of the notable moments about making this film is that Spencer Tracy would call his co-star, Humphrey Bogart, by the name "Bogie." The nickname would stick well after the picture.
The film was shot in a few days, edited in a week and previewed in September, in San Bernardino. The film was released nationally on October 30, 1930.
Tracy had to return to New York to complete his commitment to The Last Mile. On January 18, 1931, Fox Films announced they were signing Tracy to a 5 year contract. Tracy would soon be back in Hollywood for good, this time with his family.
Posted by Robby Cress at 11:46 AM

In my opinion, Tracey was the best actor of his time. I would put him up against most actors of today, as well. What a natural ease he had in front of the camera. Great actor!

Love your blog glad i found you.

Pardon my interruption, but I am looking for folks that have either "Retro Sewing Blogs" or "Nostalgia Blogs" for an article I am working on . Please send your suggestions to me at dianne@cdiannezweig.com
THANKS

I like the photographic comparisons you do here. I also do this on my blog to show how was in the past the place where I live today... Congratulations!

I LOVE, LOVE, LOVE your blog!!!! I can't tell you how much all your posts are right up my alley!! I wish I lived in LA so I could go see these - I only make it there about once a year and barely have a few hours to spend finding locations. Your blog makes it possible for me to see locations from here. Thank you!!!!

I've wanted you contact you somehow to let you know, but this blog makes is difficult to find how to contact you. I just wanted to let you know how incredible your blog is, what a fabulous job you do finding pictures and locations, and how jealous I am of you! If there is a better way to contact you, let me know! Thank you!!!

Robin, I agree - I think Tracy is one of the great actors. Even his fellow actors considered him to be the best.

Elias, thanks for the comment. It's definitely fun stepping back in time with the photo comparisons.

Amy, thanks the generous comment. I'm glad you enjoy the blog so much. It's always exciting to hear others who are excited about all "old Hollywood" and historic Los Angeles. I've debated the whole Facebook thing for this site but, with as busy as I am, I'm not sure if I want to manage another site. We will see.

Interesting post! Tracy is certainly a fascinating fellow... He's really not especially handsome, but he has a charisma and (as you wrote) a body language that is close to magnetic.