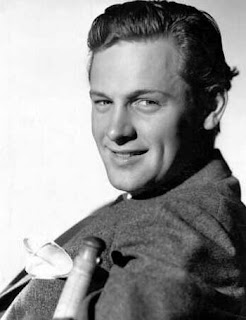 William Holden (1930s)
After a couple of small parts in some mediocre films, William Holden was finally being cast in the lead role of a film that Harry Cohn, the head of Columbia Pictures, hoped would make his handsome acting acquisition a major star. The year was 1939 and the film was Golden Boy, which also starred Barbara Stanwyck and Adolphe Menjou.
Unfortunately, the film's success was mild and it would be a few years before Holden would get such a major role again. This was the magical year 1939, the same year that Gone With The Wind, The Wizard of Oz, Dark Victory, Mr. Smith Goes to Washington, Stagecoach and so many other memorable films were released, so Golden Boy had some tough competition at the box office. Nevertheless, Holden would always be known throughout the rest of his career as Golden Boy.
Holden was initially signed under contract to Paramount Pictures after being discovered by talent scout Milt Lewis. It was only by chance that Holden got the part in the Columbia film Golden Boy. Harry Cohn initially wanted John Garfield to star in Golden Boy, but Jack Warner at Warner Bros. refused to loan his star out. The producer of Golden Boy, William Perlberg, suggested they go after an unknown actor, how David O. Selznick did for casting the role of Scarlett O'Hara for Gone With the Wind.
Unknown actors auditioned for the part, including a young Alan Ladd. Other studios submitted screen tests of actors they had under contract. Paramount submitted a screen test with Margaret Young for another unfilled part in the film. In the screen test, reading opposite of Young, was Holden. When Perlberg and the film's director Rouben Mamoulian watched the test they were immediately drawn to Holden. Perlberg and Mamoulian convinced Cohn that Holden was the right guy for Golden Boy and to find out from Paramount who the young actor was.
Cohn phoned Y. Frank Freeman, the production chief at Paramount, to let him know he wanted not only to borrow Holden for his film, but that he also wanted to buy half his contract. Paramount was only paying Holden $50 a week, which meant Cohn could get a potential star for just $25! Freeman agreed and Holden went to work on Golden Boy. 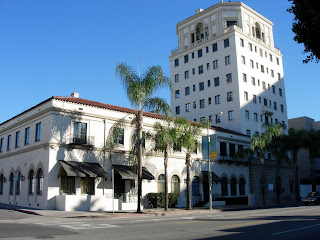 Hollywood Athletic Club, where Holden stayed
during the filming of Golden Boy
To prepare for the part of Joe Bonaparte in Golden Boy, Holden needed to learn how to box, play the violin, and he also needed to take some acting lessons. This meant Holden needed to get up at 6 a.m. every day to drive the 14 miles from his home in South Pasadena to the Columbia studio lot. He often didn't get home to bed until after midnight.  Holden became exhausted and complained to Artie Jacobson, a talent exec at Paramount. Jacobson suggested that he stay at the Hollywood Athletic Club, which was less than a mile from the Columbia studio lot.
Holden was now closer to the studio, but after he received his first paycheck, he noticed that the studio had deducted $60 for rent. Holden complained to Cohn that he was only being paid $50 and now they were deducting $60 from his check - that wasn't right. Holden demanded that the studio pay his rent. Cohn yielded to Holden's request.

Brown Derby Restaurant on Vine Street, Hollywood
A.C. Lyles, who at the time was working in Paramount's publicity department, helped Holden move into the Hollywood Athletic Club. The two became fast friends. To read another post on A.C. Lyles click here.
After the release of Golden Boy, Holden was loaned out to Warner Bros. to work on the film Invisible Stripes. One night, after Invisible Stripes was released in theaters, Lyles and Holden had dinner at the Brown Derby restaurant on Vine Street. Above is an image from my postcard collection of the Brown Derby as it would have looked at the time.  After dinner the two men drove down Hollywood Boulevard and as they came up to the Warner Theatre, Lyles noticed that the name "William Holden" appeared on the theatre's marquee. 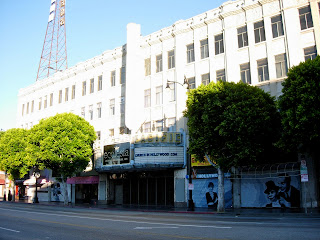 Former Warner Theatre on Hollywood Boulevard
According to Bob Thomas's biography, "Golden Boy: The Untold Story of William Holden," Lyles commented to Holden, "That must make you feel very proud."
"It doesn't mean a thing to me," Bill replied. "That's another fellow up there on that theater. I'm Bill Beedle [Holden's real name], who is somebody entirely different. I'm grateful that they changed my name. I want to keep myself separated from that other guy."
Your thoughts?
Posted by Robby Cress at 11:22 AM

i like his attitude towards his celebrity status- the qoute at the end. :)

he did also play in one of my favorite i love lucy episodes- hehehe, "I KISSED BILL HOLDEN!"