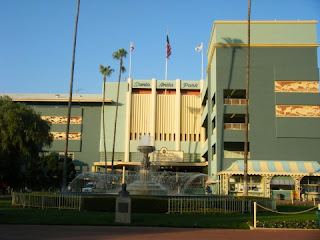 Santa Anita Park in California
Since Santa Anita Park opened back in 1934, the horse race track has been featured in numerous films, including A Star is Born (1954), Bob Hope's The Lemon Drop Kid, the Marx Brothers film A Day At The Races and National Lampoon's Vacation to name just a few. To celebrate the race track's many appearances on the silver screen Santa Anita Park, on opening day, December 26, 2010, will be giving away a free wall calendar featuring films that have used Santa Anita as a film location. The calendar is free with paid admission - and guess what - admission is only $5! What a bargain.
Santa Anita Park has not only been popular with Hollywood as a film location, but as a destination for relaxation during time off. Fred Astaire, Pat O'Brien, Louis B. Mayer, Harry Warner, the Marx Brothers,  Jack Benny, Spencer Tracy, Errol Flynn, Bing Crosby and of course many others would come here to enjoy the races - many of whom even owned their own horses.
The grounds around the race track are absolutely beautiful and very nice to stroll around between races. At just $5 it is such a bargain to come see the grounds, watch the horses, bet (or not) on the races, enjoy some snacks and just relax like the Hollywood stars.
Lately, the new HBO television show Luck, featuring Dustin Hoffman, has been filming at Santa Anita Park.  The race track is a primary location for the show.
Below is a home video I made last year when I was at the Santa Anita race track for a friend's birthday. It gives you an idea of what the grounds look like.
Posted by Robby Cress at 3:48 PM

Thanks for the plug. I hope many are able to make it to the races. It's a beautiful day today in Southern California.

Thanks for the plug. I hope many are able to make it to the races. It's a beautiful day today in Southern California.

Really nice blog.It's possible that Santa Anita is the most beautiful racetrack in the country. Flanked by purple mountains that rise up beyond the backstretch like a movie backdrop, Arcadia's longstanding course is a landmark.

I'm doing some research on the Santa Anita Race Track and Santa Anita Park for a novel I'm writing, but I don't live in the LA area to visit it. I really appreciated your video to get a better grasp of what it looks and feels like.

If you have time, would you mind answering a few questions for me?

*Is the main fountain inside the park or before the entrance?
*Is the building teal and cream (that's what it looks like on my monitor)?
*Are the hills that you can see beyond the racetrack called anything other than the hills of Angeles National Park? That's all I could find on Google maps.

Thank you so much for your help!

Glad you enjoyed the video.

Regarding the fountain, there is one fountain just beyond the main gate and before the main entrance to the track where it says Santa Anita Park - this is probably the fountain you are referring to. There is also another fountain inside the track.

The building is a teal/cream with gold accents.

The mountains in the background are the San Gabriel Mountains.

I hope that helps. Good luck with your book!

Thanks, Robby! That helps a lot!