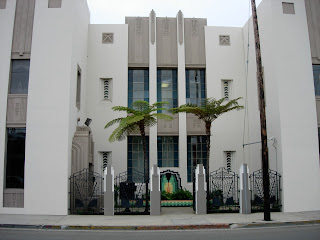 Howard Hughes Headquarters
7000 Romaine Street, Hollywood, Ca
It was from this art deco building located at 7000 Romaine Street that the multi-millionaire playboy, Howard Hughes, ruled his vast empire of businesses. Other than the deco dressing, the building is quite simple, especially when you think of the impressive entrance gates that were built for the Paramount or MGM studio lots. The building, originally a bakery and then the home of Multicolor, an early color film lab, is a few blocks south of the busy Hollywood and Sunset boulevards in the more factory part of town. Nearby are several other studio lots, film labs, and other industrial buildings associated with the film business.
Hughes made his money from the Hughes Tool Company and with that money he pursued other interests including making movies and building planes. When Hughes purchased the Romaine Street building in 1927 (or 1930 depending on the source) he was already involved with the motion picture business. At that time movies were primarily in black and white, other than a few early experiments in color. Hughes, predicting color films would someday displace black & white films, the same way talking pictures did to silents, purchased Multicolor as a place to experiment with color photography.
Hughes's most famous film, Hell's Angels, starring Jean Harlow, was filmed at the Metropolitan Studio just down the street, but the film was edited in the Romaine headquarters. In the book "Howard Hughes: Hell's Angel" by Darwin Porter, there is an interesting story about Carol Lombard being cast as a replacement to Thelma Todd in the lead role for Hell's Angels. According to the book, the following explicit exchange took place between Lombard and Hughes the day of her screen test:

"Ben Lyon tells me you like a gal with tits." Right in front of him, she manipulated her dress to expose her left breast. "You're not entitled to look at the right one until you've signed me to play Helen. Then you can have whatever you want. It's all yours, baby!"

"The part calls for a woman to be a bit of a slut," Howard said, standing up from his desk. "At least you qualify for that."

After her screen test, Hughes invited Lombard to dinner at the Brown Derby. Instead they had dinner at the Romaine headquarters where Hughes spent time showing Lombard his color film experiments. In the end, of course, Lombard didn't get the role of Helen, but that didn't stop her from becoming a popular film star.
Other well known Hughes films edited at the Romaine headquarters include Scarface, starring Paul Muni and The Outlaw, starring Jane Russell. 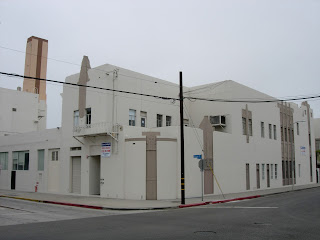 7000 Romaine Street, Hollywood, Ca
Although initially purchased for the color film lab, the Romaine headquarters would become the command center for all things Hughes. He oversaw his tool company, his film projects, and later his airline ventures all from the Romaine offices. Even Hughes's army of personal staff were stationed here. When Hughes needed someone picked up he dispatched a chauffeur from the Romaine building. If anyone needed to contact Hughes they needed to call the Romaine headquarters where a team was in place to transcribe messages and pass them on to Hughes.
Today, the building looks pretty much the same as it did during Hughes's time there. I'm not sure if or what the building is being used for now, but I would love to take a tour of the inside. Could you imagine sitting in the same screening room space that Hughes once locked himself inside?!
Posted by Robby Cress at 7:00 AM

I've read that book on Hughes, and not only do I believe he and Carole Lombard had an affair, she likely lost her virginity to him. (So "says" Larry Swindell in his Lombard bio "Screwball," although he had to dance around it a bit and not reveal Hughes' name because he was still alive at the time the book was issued in 1975.)

However, the dialogue in Porter's book -- which of course can't be corroborated -- doesn't sound like Lombard at all, especially the "quote" where she says she had previously slept with Joseph Kennedy. No biographer of either Lombard or Kennedy has ever intimated they had a sexual relationship.

Carole may well have lost her virginity on Romaine Street; according to Swindell, her affair with Hughes was conducted with airtight secrecy. But I doubt it went anywhere close to the way Porter describes it.

For more of my comments on this, please see http://community.livejournal.com/carole_and_co/57165.html

Currently, I work right across the street from this building. According to someone who used to work here, there is a tunnel under Orange Drive that bridged the two buildings.

Here's more on the Hughes building -- it's now the site of a fashion firm called "Just One Eye": http://carole-and-co.livejournal.com/573215.html.

Just spoke with someone that works in that building, he said there isn't a screening room anymore but there is a tunnel that supposedly connects to different parts of West Hollywood. He said it's blocked off though. Trying to get in to take a look around.