The Wedding of Ronald Reagan and Nancy Davis 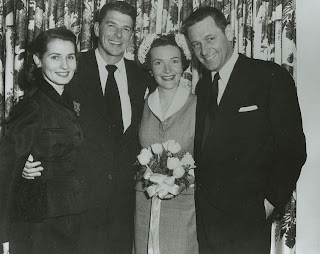 Ardis Holden, Ronald & Nancy Reagan, William Holden
Photo from Ronald Reagan Library
This Sunday is not only a big day for football fans who are getting ready to watch the Green Bay Packers take on the Pittsburgh Steelers in the Super Bowl, but for political junkies and classic film fans it marks what would have been the 100th birthday of Hollywood actor turned President, Ronald Reagan. A year long centennial celebration will be taking place with various events happening all over the globe. Visit the official centennial page for a complete overview.
Prior to making his way to the White House, Reagan was a working actor in Hollywood, making most of his films under contract at Warner Bros. in films like Knute Rockne: All American, Kings Row, Dark Victory and numerous patriotic war films. In 1937, Reagan became a member of the Screen Actors Guild (SAG) and by 1946 he was asked to run for president of SAG. Reagan would serve five terms as president. During his time as president of SAG Reagan became increasingly more conservative and more interested in politics. Some have speculated that Reagan's first wife, the more liberal actress Jane Wyman, divorced Reagan due to his increasingly vocal interest in politics. However, there were also allegations that Wyman was having an affair with her Johnny Belinda costar, Lew Ayres. So who knows what the real reasons were - probably a combination of both.
Ronald Reagan would meet his future wife Nancy Davis in 1951. Nancy had arranged to meet Reagan at La Rue, a Sunset Strip restaurant, to discuss a problem concerning her name being used in an advertisement in the Hollywood Reporter. The two began dating and found that they both had a lot in common, particularly an interest in conservative politics. The next year, while having dinner at the Beverly Hills restaurant Chasen's, Reagan asked Davis to marry him. 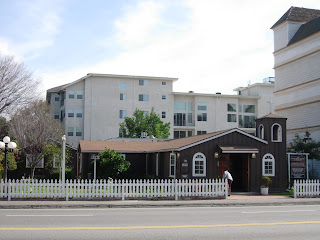 The Little Brown Church on Coldwater Canyon, Studio City
The wedding, which took place on March 4, 1952, was a very small affair. Reagan's good friend and fellow actor William Holden, would be best man. Holden's wife Ardis was the matron of honor. The Holden's were the only guests. Ardis made the arrangements for a wedding ceremony to be at The Little Brown Church on Coldwater Canyon in Studio City. The name is completely accurate. If you look at the photos above and below you can see that the church is in fact "little" and "brown." It's not some ornate location one would expect a Hollywood couple to be married. The church has been open since 1930 and is still open today, so you too could be married in the same church! 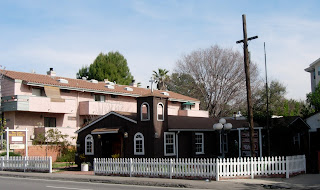 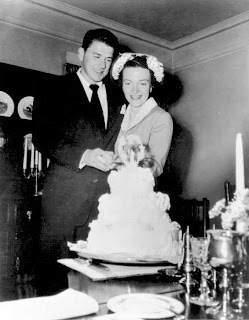 Ronald & Nancy Reagan, Newlyweds
After the wedding Reagan and Nancy spent the first night of their honeymoon at the historic Mission Inn in Riverside, California. It was then onto Phoenix, Arizona where the newlyweds visited with Nancy's parents.
A happy birthday to Reagan and to my brother who also celebrates a birthday.
Posted by Robby Cress at 7:23 PM

I drive by that church all the time--who knew!!!

Thanks for bringing us all the great stories.

Thanks for the info! I never would have guessed they went for a small/quiet wedding. Would have imagined a huge extravaganza.

Nancy was quite pregnant at the time of her marriage to Ronnie on March 4, 1952. Patti Davis was born on October 21, 1952, seven months later.