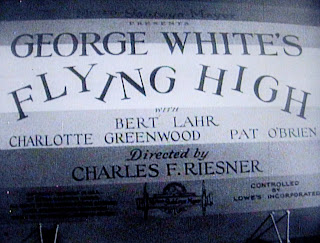 Flying High (1931)
What you will find in the 1931 film, Flying High, are hypnotic Busby Berkley musical numbers, plenty of gags, and the screen debut of Bert Lahr, eight years before his famous role as the Cowardly Lion in The Wizard of Oz. Anyone who is a fan of Lahr's expressive clowning will enjoy seeing his over-the-top performance as a neurotic inventor. It's even interesting to see in a small role, Hedda Hopper as an actress, before she would go on to be the Queen Bee of Hollywood gossip. However, what you won't find is a plausible, well written storyline, but that shouldn't be a deterrent from seeing some of the charming features this film does have to offer. The film is currently available through the Warner Archive Collection.
The film stars Charlotte Greenwood as Pansy Potts, a single woman desperate to find herself a husband and have kids. Pansy offers $500 for a husband. Businessman and swindler Sport Wardell, played by the fast talking Pat O'Brien, promises Pansy a husband in exchange for the $500. Pansy excepts Wardell's offer after he shows her a photo of the eligible bachelor - a photo of Clark Gable! Instead, the man Wardell has found for Pansy is broke inventor, Rusty Krouse, played by Bert Lahr, who of course is no Clark Gable. Nevertheless, Pansy pursues her man and Rusty amusingly tries to get away.
While watching the film I came to a scene where Pat O'Brien is standing with a group of pilots outside of what is supposed to be an aviation school. Immediately, I thought, "I've seen this building before." I then realized it was because I saw a picture of the building in the new book, M-G-M: Hollywood's Greatest Backlot. This amazing photo filled book includes images of every area of the former MGM studio and is organized in such a way, that as a reader, it feels like one is getting an intimate tour of the studio during the glory days. This book is a must-have for any classic movie lover. To learn more about the book and read an interview with Steven Bingen, one of the authors, click here. To visit the official site of M-G-M: Hollywood's Greatest Backlot click here. 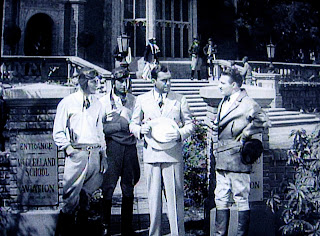 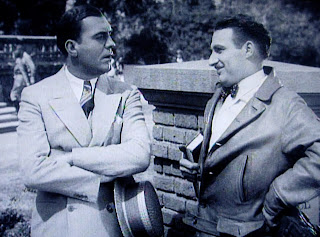 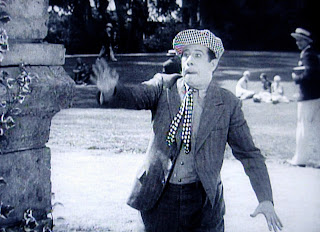 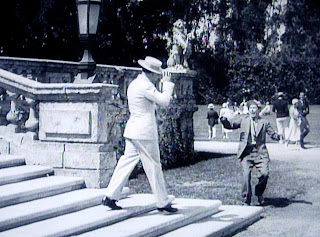 Pat O'Brien and Bert Lahr on the English House set. 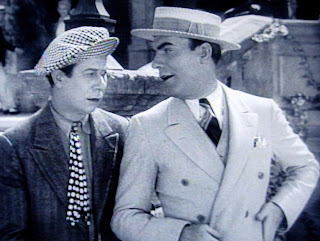 The English Home set is behind Lahr and O'Brien. 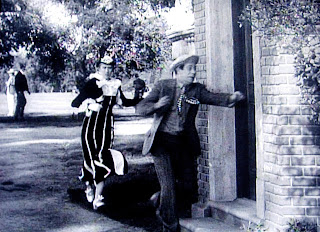 Greenwood chases Lahr around the English House set.
Later in the film all the characters find themselves at a small airport for an aviation show. My first instinct was that this airport was either the former Grand Central Airport in Glendale, California or the Western Air College Airport in Alhambra, California. As it turns out, the location is the Alhambra Airport. The first photo below is a screenshot from the film and the following photo is an image of the front side of the Alhambra Airport from the USC Digital Archives. If you look closely at the two images you will notice the same detailing above the windows on the control tower. 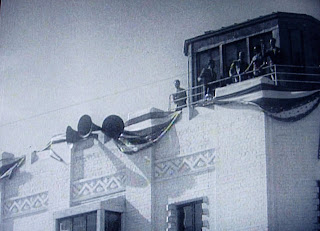 Alhambra Airport as seen in the film Flying High 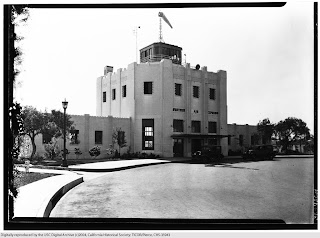 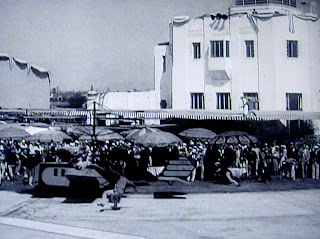 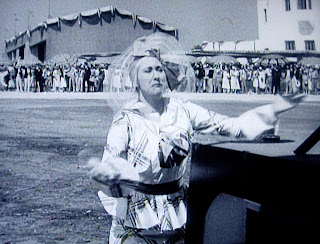 Greenwood on the runway at Alhambra Airport. 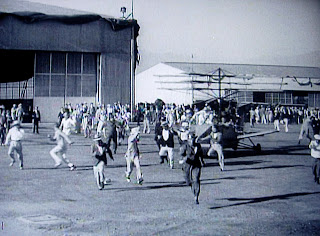 Spectators run from Lahr in his aerocopter. 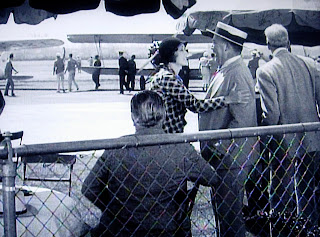 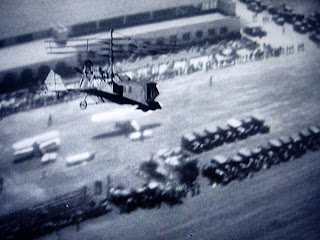 Aerial View of Alhambra Airport in the film Flying High 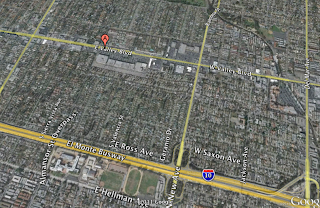 Aerial View of former site of Alhambra Airport
(c) Google 2011
There is nothing left of the Alhambra Airport so watching Flying High is a great way to time travel to the past and visit this location. In the Google Earth aerial view above you can see the former site of the airfield. The Alhambra Airport would have been located in the area between Valley Boulevard to the North, Hellman Avenue to the South, Garfield Avenue on the West and Del Mar Avenue on the East. Today the site is the location of a shopping center, high school and residential area. 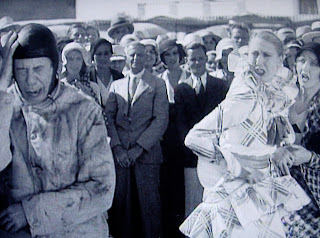 Greenwood and Hopper look on at Lahr who
just made a crash landing.
There is an interesting story to how O'Brien got the part in Flying High. O'Brien had just completed work on the film Consolation Marriage, which also starred screen legend Irene Dunne. After the Hollywood premiere of Consolation Marriage, O'Brien learned that Howard Hughes was dropping his contract. Feeling defeated, O'Brien told his wife Eloise the news and said to pack her things - they were going back to New York. Eloise told O'Brien that he should talk things over first with his agents, Myron Selznick and Frank Coleman Joyce.
According to O'Brien in his autobiography, The Wind at My Back, he went to visit Selznick at his office. When he got there Selznick, who was hungover, looked up from his desk and said, "It looks like you are going to start paying commission to me, kid."
"I hope so," replied O'Brien.
Selznick explained to O'Brien that Joyce was going to take him over to MGM to meet with Irving Thalberg about a part in the film, Flying High, that Bert Lahr was going to be the star in what was to be his film debut and O'Brien was up for the second lead. O'Brien got in Joyce's Rolls-Royce and on the way there Joyce said, "Now, no matter what happens during the Thalberg interview, don't open your mick trap. I'll handle everything. I may drop a couple of bombs, but just stand pat! No pun."
When the two arrived at MGM O'Brien and Joyce were immediately ushered into Thalberg's office. There was no waiting for them. Thalberg told Joyce that MGM was definitely interested in O'Brien for the part and wanted to know his asking price. "Seventeen-fifty a week with a three-week guarantee," exclaimed Joyce. Thalberg was blown away at this asking price as he new O'Brien was only making seven-fifty per week under Hughes.
O'Brien was shocked too that Joyce had asked Thalberg for so much and began to get nervous, but like Joyce instructed, he didn't say anything. When Joyce and O'Brien got up to leave Thalberg's office, O'Brien felt sad. He thought this would be the end of his Hollywood career and he would end up having to go back to New York for sure.
Before they made it to the door, MGM executive Eddie Mannix told O'Brien, "You're out of your mind, my boy. Passing up a chance like this to work for the biggest studio in the business - and Irving Thalberg. We will give you twelve-fifty a week."
O'Brien told Mannix to talk to his agent, but Joyce said, "Why waste time? Jack Warner is waiting for us. The food's better there, too."
In the end, Pat O'Brien go his $1750 per week, with the three-week guarantee. The film went over to eleven weeks.
Your thoughts?
Posted by Robby Cress at 11:00 AM

That was so interesting!

Lombard never made a film called "Consolation Marriage," and her only screen appearance with Pat O'Brien came in "Virtue," which wasn't made until 1932.

Thanks VP81955! I meant to type Irene Dunne! I've corrected that now.