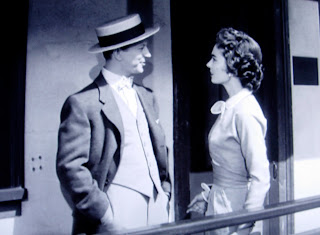 Donald O'Connor as Buster Keaton & Ann Blyth
I've read many negative things about the bio film, The Buster Keaton Story (1957), but as a Keaton fan, I figured I needed to see the film once to judge for myself. To be fair, the film isn't awful, it is mildly entertaining, but the story really isn't about Buster Keaton at all. The story is almost entirely fictionalized, with only a few traces of Keaton's life worked in. If the filmmakers were trying to make Keaton's story more dramatic, they didn't need to fictionalize anything - Keaton's true story was pretty tragic already.
To me the most satisfying thing about watching this film had nothing to do with Buster at all, it was spotting one of the buildings on the Paramount Studios lot that was also used as a set in the classic film, Sunset Boulevard (1950). In the screenshot at the top and and the screenshot below, Donald O'Connor, who portrays Keaton, is seen with the fictional studio exec Gloria Brent, played by Ann Blyth, in front of the offices of "Famous Studio." That office building with the exterior stairs is actually the "Dreier" building on the Paramount Studios lot. 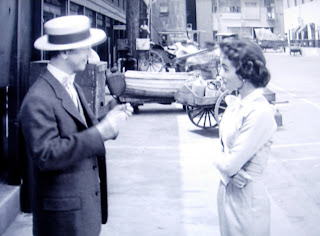 O'Connor and Blyth with the Dreier building at left. 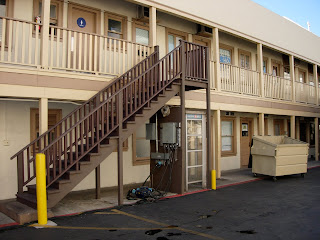 The Dreier building on the Paramount Studios lot. 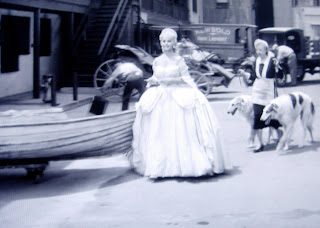 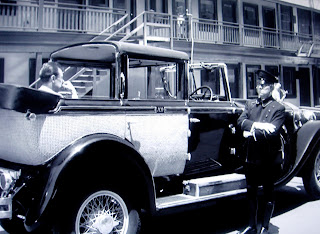 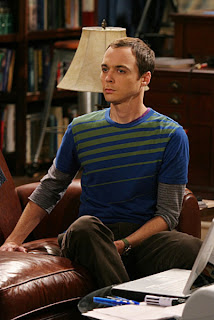 Jim Parsons as "Sheldon" on the television show
"The Big Bang Theory"
Buster Keaton lived a very interesting life, filled with dramatic ups and downs, and it is unfortunate that no one has made a great film about this filmmaker icon. One of my favorite bio pics is the 1992 film, Chaplin, directed by Richard Attenborough and starring Robert Downey Jr. as Charlie Chaplin. That film was so beautifully shot, had a stellar cast and a score that transported viewers to the Chaplin era. I wish that Buster Keaton could have such a film made about his life.
One challenge would be finding an actor around today that could portray Keaton. Every time I see the deadpan expressions made by Emmy winning comedy star Jim Parsons, who plays Sheldon on the hit TV show "The Big Bang Theory," I instantly think of Keaton. Although, Parsons might be a little tall, I think his look is spot on. What do you think? Who do you think would make a good Buster?
Your thoughts?
Posted by Robby Cress at 11:28 AM

Holy smokes! I love Sheldon and had never seen the resemblance until now. WOW!

Jim Parsons acting is probably inspired a bit in Keaton. I'm not completely sure he could do it tough, he is too tall and he doesn't look too masculine or athletic. The only actor I've seen that reminds me of Buster is Gad Elmaleh. If he speaks english fluent enough he would be my choice.
Nice blog.

Ahhh... Parsons does have the stoneface down quite well, must say! Can he do the craggly voice Buster had...? Hmmm....

SO sorry, by the way, I've not responded to your earlier messages Robby! Have meant to nearly EVERY DAY and simply, shamefully, HAVEN'T. :( Don't hate please...

I am truly impressed by your dedication to connect vintage films with present day locations.

I started a thread with the title 'noirish Los Angeles' on a website called skyscraperpage.com. Surprisingly it has evolved into a valuable source of Los Angeles history with over a half million views.

It would be a honor if you were to visit our thread.

I know, it's almost uncanny the resemblance at times.

I'm not familiar with the actor Gad Elmaleh. I'll have to check him out!

I agree, Buster's voice is quite unique and might be a bit of challenge for many actors. And no hating here!

Many thanks for the kind comment and for sharing the link. What a great site! I've been scrolling through many of the images people have posted ever since. I'm amazed at some of the historic pics people have contributed.

great post cutie, and yeah- although the film itself wasn't that true to Keaton's life, it was still interesting to watch. jim parsons gets my vote.

I think of Buster Keaton every time I see Jimmy Fallon.

Jimmy Fallon sounds good though not "gritty" enough. How about Robert Downey Jr.?

I think Alan Cummings would be a PERFECT Buster.