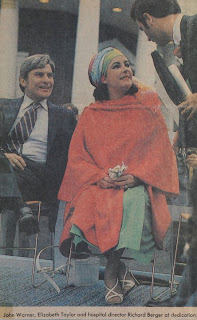 Senator John Warner and Elizabeth Taylor
(Photo from Ministry Health Care Facebook Page)
This post is the second part related to my trip to the North Woods of Wisconsin. To read my first vacation post on the Little Bohemia Lodge, the site of the John Dillinger shootout with the FBI and the filming location for the film Public Enemies, click here. In today's post I visit a site related to the grand actress, Elizabeth Taylor.
Elizabeth Taylor spent ten of her childhood summers fishing, hiking and playing in the woods at her uncle Howard Young's estate, Cedar Gates, in Minocqua, Wisconsin. This small North Woods town,  sometimes referred to as "Island City," is surrounded by thousands of lakes and rivers. Young's estate was situated on Lake Minocqua, "one of whose islands Sara [Elizabeth's mother] had renamed 'Elizabeth's Island,'" according to Alexander Walker in his biography, Elizabeth: The Life of Elizabeth Taylor.  The island reminded Sara of J.M. Barrie's enchanted island in his play Mary Rose. One can imagine a young Taylor, play acting on the island, like a character out of one of Barrie's plays. 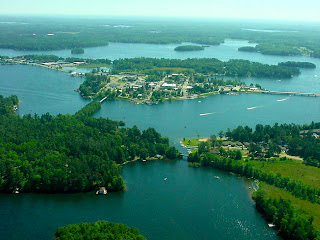 Minocqua, Wisconsin - "Island City"
Photo Credit: Jesse Canfield
When Taylor and her family had to go into town, Leslie Rusch, who owned a local dime store, remembered in a July 4, 1977 People magazine article, that Taylor "used to look at the coloring books and play the penny slot machine." I remember when I was a kid how fun it was to go and visit the small shops in Minocqua. As a boy, I was more interested in the sling-shots and the toy bow and arrows that I would have my parents buy so that I could go "hunting" outside when we got back to the cottage.
Like myself, Taylor always had fond memories of the summers she spent in Minocqua and would sometimes return to the area as an adult. On one occasion in 1977, Taylor visited Minocqua with then husband, Senator John Warner, for the dedication of the Howard Young Medical Center, a new state-of-the-art hospital. Taylor's uncle Young was a wealthy art dealer, who in 1972, surprised residents of the area when he bequeathed $20 million so that the area could build a new hospital and attract the best doctors. The photo at the top shows Taylor and Warner at the dedication ceremony. 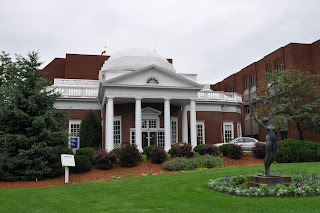 Howard Young Medical Center
In the next-door town of Woodruff, 2,500 people came out for the dedication of the new hospital, but mainly to see Elizabeth Taylor. "This would have been the proudest day of Uncle Howard's life," Taylor, as quoted in People, told the audience. Taylor told the audience how beautiful the area still was and explained that it was in Minocqua that she learned to fish, but that on this trip, her husband John fished without her. "He came back dangling a poor little fish," Taylor said. "He said, 'Honey, here's your breakfast."
Now, you may be wondering, other than being a die-hard Elizabeth Taylor fan who must see everything related to Taylor, why would anyone want to visit this hospital? Well, for one, continuing in the tradition of Howard Young's passion for art as a dealer and collector, the hospital regularly displays artwork by local artists. These include paintings, drawings, photography and three-dimensional artwork. Even the outside of the hospital, was designed to be a copy of Thomas Jefferson's Monticello, one might say an architectural piece of art. Second, inside the hospital is a display and video kiosk showing the history of Howard Young that is pretty interesting. 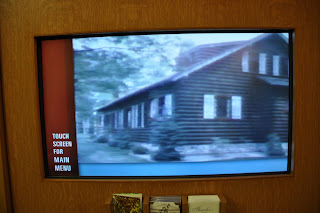 Video kiosk inside Howard Young Medical Center
The most interesting parts of the video kisok for me were the scenes of Howard Young at his Minocqua estate, which include some scenes of Elizabeth Taylor and Young's friend, President Dwight D. Eisenhower. Young considered Eisenhower a close friend and even played a big part in Eisenhower getting into the 1952 presidential race. 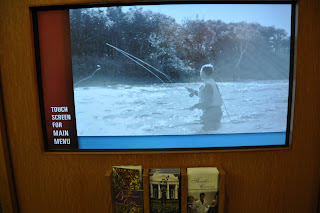 Video kiosk showing Howard Young Fishing in Minocqua
Prior to the new state-of-the-art hospital built using the money bequethed by Young, the first major hospital built in the Lakeland area also has an interesting back-story. Local doctor, Kate Newcomb had envisioned a hospital for the area and through contributions and volunteer help, construction began on a new hospital. Unfortunately there was not enough money to complete the project.
Students at the Arbor Vitae-Woodruff School, at the suggestion of their geometry teacher Otto Burich, started a campaign to collect a million pennies. This started the Million Penny Parade and the money collected would go towards the completion of the hospital.
In March 1954, Dr. Kate visited California for a doctors convention and ended up being the surprise guest of the TV program, "This is Your Life." Dr. Kate's appearance on the popular TV show inspired people all over the country to donate money to the campaign. With these additional donations enough money was raised to finish the hospital. 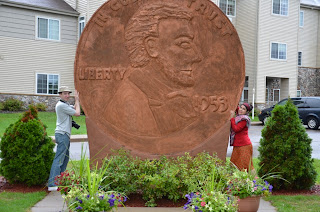 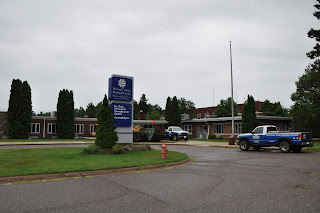 The hospital completed with funds from the Million Penny Parade. 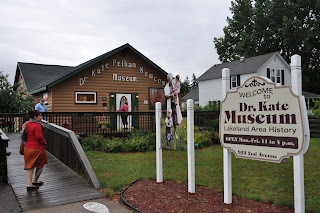 Dr. Kate Museum, Woodruff, Wisconsin
Around the corner from the Lakeland area hospital which was built using money raised from the Million Penny Parade, is a museum dedicated to the legacy of Dr. Kate. It's an interesting stop worth peeking into. There is a screening room which shows the episode of "This is Your Life" that Dr. Kate appeared on and a short documentary on her life. There are also several artifacts on display including the letters sent in from people all over the United States who sent in money for the Million Penny Parade, the snow shoes Dr. Kate wore during the blustery and snowy Wisconsin winters to make "house" calls, as well as many photographs. 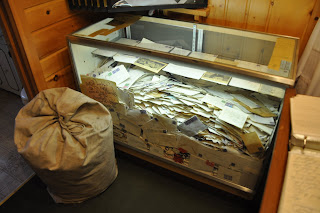 Letters sent in from the Million Penny Parade
If you are interested in learning more about the Lakeland area here are some other sites to visit:
Minocqua Area Chamber of Commerce
Town of Woodruff
Howard Young Medical Center - Ministry Health Care
Posted by Robby Cress at 1:29 PM

That was cool; I really enjoyed that!

And the Liebster Award goes to YOU from Another Old Movie Blog: http://anotheroldmovieblog.blogspot.com/

Hey you! Can't find your email just at the moment, so apologies for this message which is OBVIOUSLY in the wrong place, but ... I am somewhat relieved to see I'm not the only one. AnotherOldMovieBlog beat me to the punch!! I'm giving The Liebster award to you too! Really Robby, you deserve a million of them. :)
http://tinyurl.com/3chrtgl

And, to at least

Thanks so much for the "Liebster Award!" I'll be sure to read the "rules" that are associated with this award and keep it going. I'll have an update this weekend.