On Vacation: The North Woods Part One 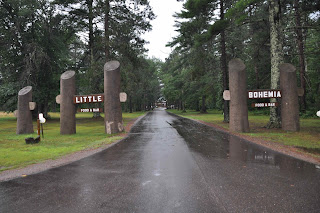 Entrance to the Little Bohemia Lodge
Manitowish Waters, Wisconsin
Following in the footsteps of many classic Hollywood stars including Bing Crosby, actresses Janet Gaynor, Joan Crawford and Elizabeth Taylor, my wife and I took a vacation to the North Woods of Wisconsin. Although, it wasn't the Hollywood connections that attracted us to the area, but the same things that have attracted so many people to the area: the fresh aroma of pine trees, crystal clear lakes, fishing, boating, wildlife and a peaceful and serene atmosphere.
As a kid, I looked forward to vacationing in the North Woods every summer. I had not visited in over 15 years and had longed to go back, as well as show my wife, a born and raised Los Angeles city girl, what life in the woods is like. The moment we arrived in northern Wisconsin we were greeted by the familiar scent of pine. We saw bald eagles, loons (a common bird in the area), turtles, fish, otters, plenty of deer, woodpeckers, and numerous other wild critters. It was a landscape far different from the cityscape we left behind in LA. We were in the middle of the woods, far from most everything but nature. It's no wonder why so many of the big Chicago gangsters of the 1930s and 1940s also came to the North Woods of Wisconsin to get lost. 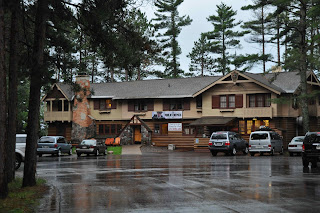 Little Bohemia Lodge, Site of the John Dillinger Shootout
Yes, that's right, gangsters. During the 1930s and 1940s, whenever things got heated in Chicago, many of the gangsters would flee to the North Woods to hide out from the law. Many gangsters had cabins in the area or stayed at one of the small lodges in the woods. Sometimes the gangsters weren't hiding out. They were just looking for a relaxing vacation. Even gangsters need a little R&R.
One of the most famous incidents involving gangsters in the North Woods is the shoot-out between the FBI and John Dillinger and his gang. If you've seen the film Public Enemies, starring Johnny Depp and Christian Bale, you know the shoot-out I'm talking about. Both the actual shoot-out and the scene in the film took place at the Little Bohemia Lodge, located on Little Star Lake in Manitowish Waters, Wisconsin. All the pictures in this first part of my trip report are of the Little Bohemia Lodge. 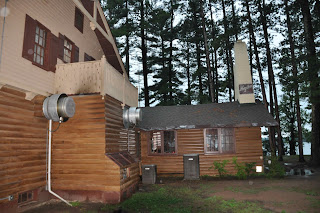 The balcony where Dillinger and gang escaped FBI.
In April of 1934, John Dillinger, a.k.a. public enemy number one, arrived in Manitowish Waters, along with his gang, to spend the weekend. The gang included Lester Gillis ("Baby Face Nelson"), Tommy Carrol, Homer Van Meter, and Pat Reilly. They were also accompanied by five women.
Dillinger and his gang were on the lam after a killing and robbery spree that took them across the Midwest. The FBI, headed by J. Edgar Hoover, were ready to do anything to catch Dillinger who had embarrassed the department when he was able to escape capture once before. On Sunday, April 22, 1934 the FBI received a tip that Dillinger and his gang were staying in Manitowish Waters at the Little Bohemia resort. Hoover gave orders for FBI agents in St. Paul and Chicago to head up to Manitowish Waters immediately.
The FBI's surprise attack on Dillinger and his men was a disaster. FBI men surrounded the lodge and when three innocent bar patrons left the lodge, the FBI opened fire on their car, killing one of the patrons immediately. Dillinger and his gang heard the gunfire and started their escape out a rear window and headed towards the shore of Little Star Lake. Baby Face Nelson, who was in another cabin, took off toward Highway 51, where he came across more agents in a car. Nelson opened fire on the agents, killing one and then taking their car to escape. The FBI continued firing bullets and tear gas at the lodge, but when they entered, only the five women who were left behind were found. Dillinger was ultimately gunned down three months later when he was leaving the Biograph Theatre in Chicago. 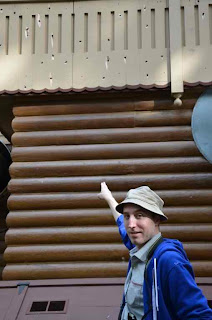 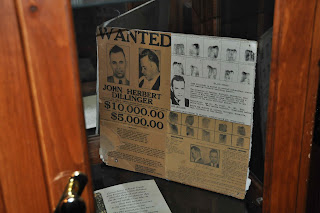 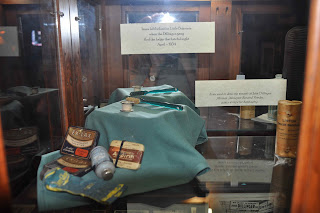 Items left behind by Dillinger and gang. 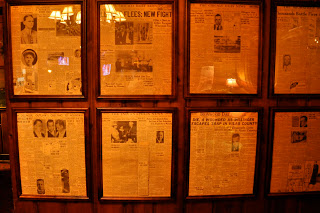 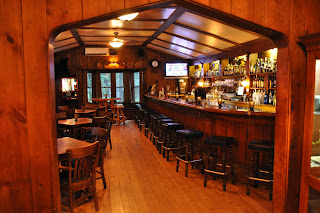 The main bar at the Little Bohemia lodge. 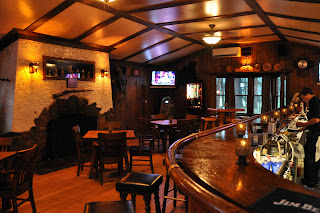 Looking into the bar. 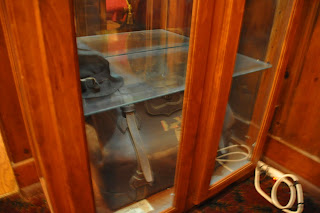 The suitcase Dillinger used to carry their stolen money. 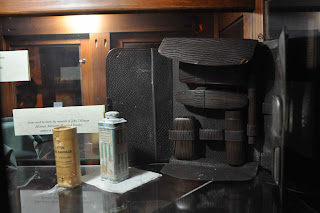 Items left behind by Dillinger's gang. 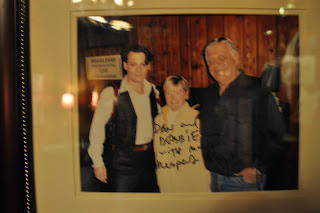 A photo of Johnny Depp dressed as Dillinger with
the current owners of the Little Bohemia lodge. 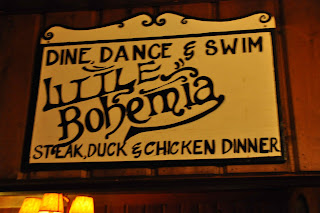 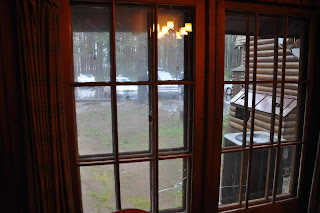 Real bullet holes in the window. 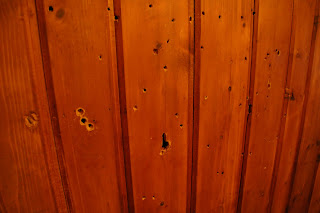 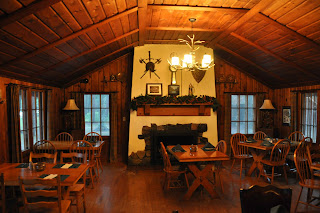 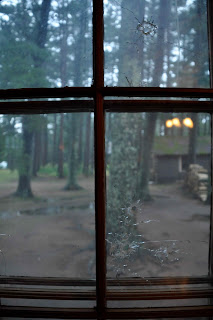 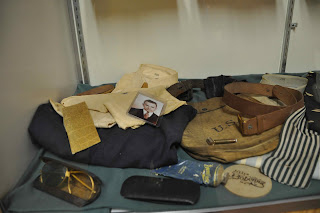 Clothes left behind by Dillinger. 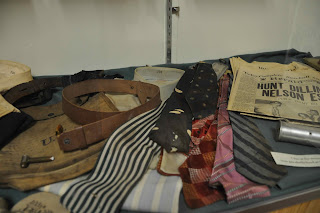 More clothes left behind by Dillinger and gang. 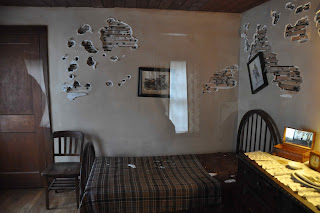 The room where Dillinger and gang stayed. 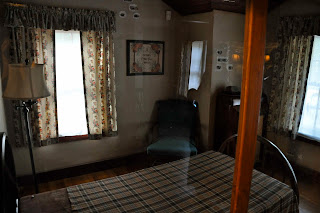 Another view of the room where Dillinger stayed. 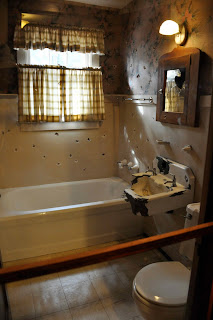 The bathroom next to Dillinger's room. 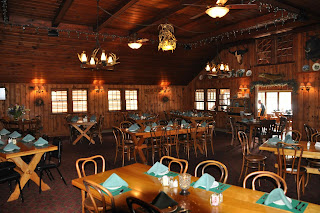 The Little Bohemia Lodge Restaurant.
My wife and I, along with my parents, had a late breakfast in the restaurant at the Little Bohemia lodge. The portions were quite large and everyone seemed to enjoy what they ordered. I was more hungry for lunch, so I ordered the "Dillinger Dip," Little Bohemia's take on a French dip sandwich.
If you stop by to visit Little Bohemia, which I definitely recommend, it is worth eating in the restaurant. Our friendly server, Vince, was also full of knowledge regarding the filming of Public Enemies. My favorite story was regarding all the pine needles on the ground. Before the filming started, Vince was raking the grounds around the Little Bohemia lodge, clearing the area of all the fallen pine needles and pine cones. This is before he knew they would be using the lodge for the film. By the time Vince finished raking the grounds he found out that the film crew was shipping in $5,000 worth of pine needles from New Hampshire! 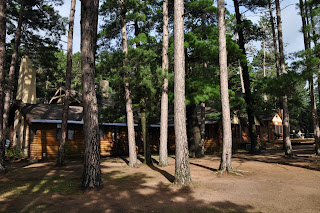 Looking at the lodge from the lake side. 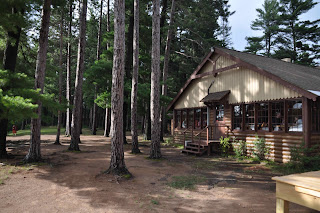 The back side of Little Bohemia lodge. 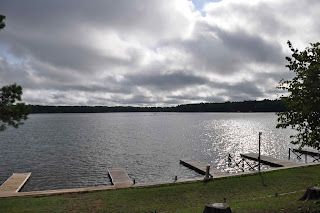 Little Star Lake behind the Little Bohemia Lodge
Above is Little Star Lake, right behind the Little Bohemia lodge. It is along the shore of this lake that Dillinger and his gang made their escape. During the filming of Public Enemies, our server Vince and his friends were able to watch the filming take place from their boat on the lake.
It was also nice to hear everyone speak kindly of Johnny Depp. People said he was a nice guy and that he took time to pose for photographs.
If you ever make it to the North Woods of Wisconsin, the Little Bohemia lodge is certainly worth a stop. Later I'll post some more of my North Woods trip.
Posted by Robby Cress at 12:33 PM

Great post Rob! It was slot of fun too!

WOW!!! That was soooooooo interesting! I love visiting places with neat history. Now I've added this to my wish list! Thank you for sharing!

That you Robby! That was great! It really felt like I was right there! Like Connie said, now it's on my list - gotta go see it for myself :)

I hope you two are able to make it to that part of the country some day. It is absolutely gorgeous - especially during the summertime.

This is beautiful! I thoroughly enjoyed your post. I'd also love to visit Wisconsin as it's the true-life setting for my favorite Laura Ingalls Wilder book, LITTLE HOUSE IN THE BIG WOODS. :) Thank you for the terrific photo tour!

Is there a tribute to the innocent person who was mistakenly murdered by the FBI? It seems they are glorifying the gangster. Why do we make heroes of criminals?